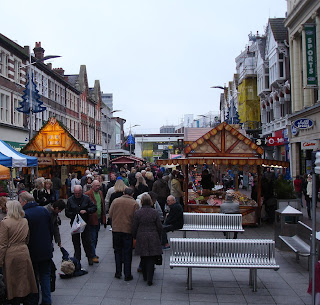 What's the deal with these Bavarian\German\French markets that seem to pop up in the High Streets in November and December? The one that appeared in Southend High Street last month (Bavarian\German) is, as was largely predicted, pants! When you hear a Bavarian market is headed your way, your mind conjures up wonderful images of snowy alps, lederhosen, Beer Kellers, Oompah bands, maybe even a bit of yuletide bear baiting... but transfer the lot to a chavy seaside town, and somehow the whole thing goes a bit naff!
I don't think I've spotted a single thing for sale that you can't buy in one of the normal shops in the High Street. I mean, one 'ol fella has lumped a few ton of 'pick n mix' over (that classic Bavarian delicacy!)... yeah, thanks for that mate, we've only ever dreamed of jelly strawberries and gobstoppers in Southend! I swear it's the same 'pick n mix' that you get in the cinema! And of course, this poor chump has paid to have it all carted over, and is no doubt having to pay for digs every night for a month to boot... and if he's sold more than a quids worth I'll be shocked!

And has anyone ever bought one of those hideous orange 'rock lights'? I use the word 'light' in the loosest term, as those things are so dim that I'd imagine the room gets darker when you switch it on! Again, you see the same rock lights in exactly the same position day after day, week after week... Who on earth persuades these poor people that Southend is the Mecca for 'pick n mix' and rock lights??
However, I was delighted to see that an open air yuletide bar had been set up at the top of the High Street, selling German beers and various mulled wines... Now that DID appeal! The only thing is, they've set the whole thing up right next to the permanent High Street sign warning you can be fined £500 for drinking alcohol there! That's gotta affect business!

The other thing of course is that because the overheads are so huge, most of the prices throughout the market are extortionate! £6 for a small gingerbread heart anyone? Toffee apple for £3? a manky bag of roasted peanuts for a fiver? Just what people are looking for in a credit crunch Christmas!

Other delights on sale right now in Southend High Street include 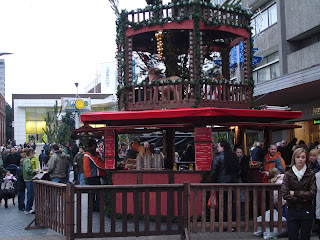 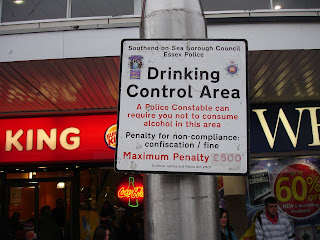 Hey! A £500 fine for drinking at the open air Bavarian bar? Not so tempting! 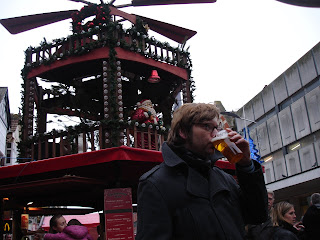 But Piley likes to live dangerously, and risks a pint anyway.... 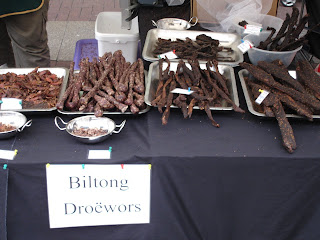 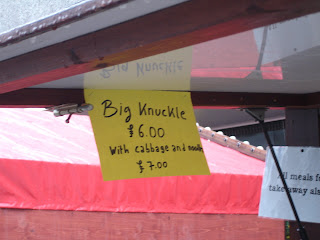 Surely you can't resist a big knuckle? Someone should have told them that knuckle sandwiches are already common (and free!) in Southend High Street, especially after closing time... 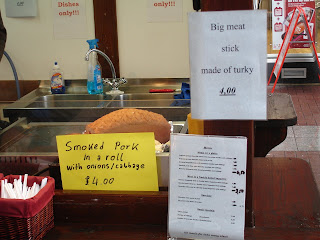 Meat on a stick? Come on mum, give the kids a treat! 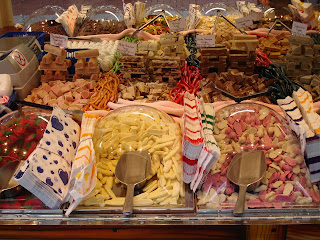 Yeah, I agree Piley. I often have to weave my way through numerous stalls displaying the most unappetising and unappealing things for sale. The first time I experienced one of these 'special markets' was a few years ago.
I had to visit Southend one weekend and as I began my trek down the High Street I was confronted by dozens of wooden buildings lining both sides of the Street. I thought I'd inadvertently wandered into some impromtu Garden Shed Owners Convention!

Why can't they put them all at the end of the pier?

I thought selling Biltong was illegal - well a mate of mine wasn't allowed to import it at one point I know that.

Not that there is any point importing it or selling it.... horrible!

We used to get those crapmarkets in my chavvy high street too but where I live nobody can afford the pick n' mix so they stopped coming. Good job too!

I'm doing a bit of Christmas shopping tomorrow - may try a bit of 'Knuckle' or 'stick' - but am wary of your recommendations though P, after stiffing me up with 'Bombay Duck' once....

I think the very same market comes to Twickenham this weekend although it has been referred to as 'continental market'. Yaaawn. Biltong looks like poo. Sorry - it had to be said!

Dave G - SPOT on! The 'garden shed convention' is a dead ringer! Someone somewhere must think we're going to find it very cultural or something, which, to be fair, would be the case if i were to go to Bavaria!! but somehow it's 'lost in translation' and reeks of fleecin the locals

Furtheron - Not sure about that, but if it's not illegal it f'in well oughta be!! I tried some of it and it was rank!

Mondo - bloody hell, you still holing that Bombay Duck against me??! must be 20 years ago!! It's a tradition mate! I was caught out, so i had to con someone else!! surely you 'tagged' someone else by now??!! Come to think of it, i'm not sure i even see bombay duck on the menu anymore??

Checked it out today P - just a bizarre as you've described including a full on hog roast - and a chav mum buying a bit of Biltong Droewors for her nipper in the buggy - I hung about waiting for the tears, blooming bloke tore into it didn't he!

'ere try this you'll love it

Were those indians or mongolians or what ever busking as well ?. You know the hairy fuckers with pans pipes ?. Awful.

I cooked a few "Big Meat Sticks" over the weekend. Good Stuff.

Carl - nah, the hairy ones are banned until the new year, only AUTHENTIC Bavarians need apply ;-)

Heff - what you an Donna get up to on these cold winter evenings is really none of my business!

Top blog item Piley. Made me and my colleagues roar with laughter.

Having just returned from Brussels, I have to say that it was not much better over there, just more of it!

Cheers Warble!! Did you manage to pick up any pick n mix over there??!