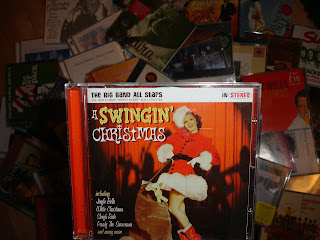 OK, I admit it... I'm a Christmas album pervert!! You hear these rock 'n roll stories where bands are living in such debauchery, that 'normal' sex just don't do it any more... So they have to 'up the ante', and of course, this becomes the norm and boring too. So the bar is continually raised until they are officially 24 carat pervs! Well that's me... but on Christmas albums (honest!).

I did a post last year about my weakness for Christmas albums... Y'know there was a time when a straight 'crooner' album of all the traditional classics would hit the spot for me every time. But there's only so many similar versions of 'Chestnuts Roastin On an Open Fire' you can buy before you start to lust after forbidden fruit, and for the last two or three years, that's what I've been pretty much exclusively buying... mad Christmas albums!
This 'Swingin Christmas' album is a good example. The cover has been designed to make you think it's a 50's album, but although there are no dates included in the sleeve notes, these tracks are much more likely to be from the 70's (maybe even early 80's), so are much cheesier on the ear than you might have expected!
Most of the tracks on this album sound like the closing credits to a 1970's Carry On film! (yes, really!), rather than 50's Sinatra cool swing (as they are trying to make you think), BUT as a Christmas album pervert, that suits me down to the ground! (I've got way too many 50's swingin type Christmas albums anyway).
I also love the cheekiness (some would call it pure fuckin laziness!) of including what I was fully expecting to be a new, undiscovered Christmas tune... Mr Santa. I've got a pretty good 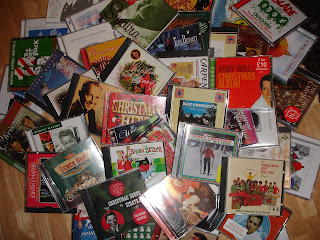 knowledge of Christmas songs (even the pretty obscure ones), but this one had me intrigued, I'd never heard of it or seen it listed on any other album before. So imagine my disappointment when on playing it I discovered it was actually that well know Christmas favourite 'Mr Sandman'!! If there had been some vocals it might have been something, but seeing this is a strictly instrumental album, I can't help but feel its inclusion was a bit of a rip off!! I mean, what next??? 'I Wanna Whole Lotta Christmas'? 'Ride a White Christmas'??!
Here's a taster from this album, which I can't listen to without picturing a cartoon caricature of Sid James cackling maniacally whilst givin the 'ol thumbs up!
JINGLE BELLS - DON LUSHER

We were putting up the tree and all that last weekend. The Mrs said "we ought to have some Christmas music on while we're doing this". Only thing we have is a CD from when my daughter was in junior school with various murderings of carols etc. by the lovely 8 - 11 year olds... :-)

We have no other Christmas albums... humbug! :-)

You should both come over to my place for 'Countdown To Christmas' - there's a sackload of goodies going on - Cajun and Punk flavours so far with a home made winter mixture going up this Friday...

I'm at the Crooner stage at the moment due to your post last year and your kind lend of your collection during November ! Will be in touch in a couple of years for some of your saucier stuff.....

Ohhh man Piley you are a real perv. I hate most xmas tunes , A Merry Jingle by The Greedies and Santa Claus Is Back In Town by Elvis being my faves. You have eerr eclectic tastes P :-).

Cheers All!! I never said it was gonna be good!! Just, erm, different!! Look i've already confessed to being a (Christmas album) pervert!

There are more of these Christmas album posts to come, so be afraid!