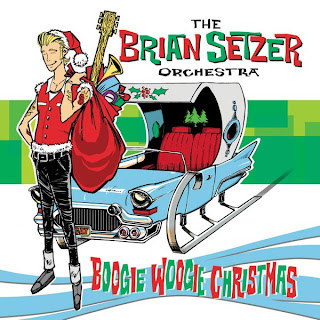 Well so far I've covered the good, the bad and the Cheesy! But the final part (for this year anyway!) of this rummage through my Christmas albums is a genuine, sure-fire winner.

The king of rockabilly swing Brian Setzer has released two of the finest Christmas albums to ever grace my collection. I've picked 2002's Boogie Woogie Christmas to review here (but that doesn't mean 2005's Dig That Crazy Christmas is any less of an album). It's got everything you could ever want from a Christmas album, all wrapped up in a plastic jewel case. There's rockabilly, there's blues, there's a big band, there's croonin' and there's Setzer's incredible guitar playing. And even though it's a Christmas album, there's not a hint of cheesiness about it.

The diversity of the tracks included on here is incredible... from classic Christmas numbers to Hymns, from brand new Setzer songs to swingin' takes on winter themed classical music, it's all here.

There is more than a nod to the classic Elvis Presley Christmas album here too, as Brian just about out-Kings the King with his renditions of Blue Christmas and Santa Claus is Back in Town. He even manages a duet with Ann-Margaret, one time girlfriend of the burger King, and co-star of Viva Las Vegas. 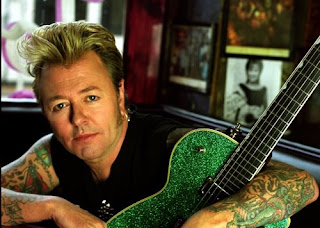 Setzer breathes a breath of fresh air into his versions of Jingle Bells, Winter Wonderland and Sleigh Ride, all brought bang up to date with his brand of rockin' guitar led swing.... they can't fail to get you in the Christmas mood! His reworked 'highlights' medley of The Nutcracker Suite is also a revelation! Half Glen Miller half Stray Cats! It's really shouldn't work, but it really does! The new Setzer tracks slot into this album a treat, each one is an instant classic and sit perfectly next to the standards. The album finishes with a genuinely moving version of O Holy Night followed by The Amens. Both of which could sit proudly on any of Presley's gospel albums.

If you're tempted, this year Brian has released a 'best of' his Christmas albums 'Christmas Rock', which also includes a couple of previously unreleased gems. But if you're feeling flush, for a few measly quid extra you can get the deluxe version which comes with a full length Christmas concert DVD - an STILL get change from a tenner! You can buy in on Amazon HERE.

To finish, here's a couple of samplers from Boogie Woogie Christmas. Just try an stop those toes a-tappin!
SANTA CLAUS IS BACK IN TOWN:

SLEIGH RIDE:
Well that's the last of my Christmas album reviews.... not even had time to touch on yuletide offerings from the likes of Twisted Sister, the Wurlitzer Organ or even my favourite Bluegrass version! Always next year though eh?! Normal service will now be resumed!
MERRY CHRISTMAS!!
Piley

Happy Christmas to all at Piley Towers

He's got about 3 Xmas albums hasn't he - belters all.

Did you get the Tijuana CDs yesterday?

Ahhhh now this is Christmas music as it should be. I respect this guy but dont really have any records by him the two tracks you put up are the dogs bollocks and noooo mistake mate. His version of Santa Claus Is Back In Town may even top Elvis's my all time fave xmas tune (along with the Pistols / Thin Lizzy joint blast A Merry Jingle). A happy rock n roll xmas to you P and Jules and junior Piley. Not to mention tic tac man you ol Ladykiller you :-).

Merry Christmas P old chap. Love and peace to you and yours.

cheers Mondo! S'just the two Crimbo albums mate, unless you count the new Crimbo comp of course. Got the CDs ta, nice touch! Been giving em a go today! Have a good one mate.

Carl... WOAHHHHH!!! The Grinch has finally melted!!!!! LOL!! I always keep the best til last mate! It's a cracker eh? and his guitar playing is up there with the all time bests. And a happy rock n roll Christmas to you too!

Col - Thanks for the greetings mate, all the very best to you n yours too....

I LOVE how Col totally ignored the Brian Setzer stuff !

Dude, back when I was HEAVILY into Heavy Metal in the mid to late Eighties, Brian Setzer was in a band called the "Stray Cats", which I thought COMPLETELY SUCKED.

These days, I look back, and he's always been complete GENIUS. A great guitar player, knowing exactly what he wanted to do, and where he wanted to go. Not my bag musically, but I have to give him his Props. He's GREAT at what he does !

Happy New Year to you, Piley.

Although I was never a big fan of the Stray Cats at the time I have grown to realise over the years what a brilliant and knowledgeable guitarist Mr. Setzer is. Wish I'd read this before Christmas as I'd be hunting this one down. as much as I love the standard Christmas stuff this would have made a refreshing change.

Heff - I had faith in ya! Knew you'd appreciate his downright genius guitar playin'

Anon - Thanks for droppin by! Sorry you didn't read it in time, but hey, pick it up now and be all set for next Christmas!! Don't be a stranger!