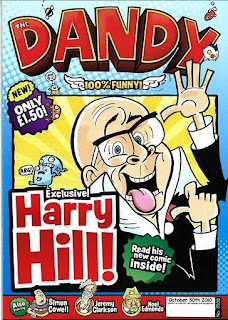 Well it's been an eventful few months for the British comic. Back in August we saw the launch of the 'mature reader' title CLiNT. In September it was announced that another comic aimed at the same audience - STRIP - was scheduled for release early next year (I'll no doubt blog that a little nearer the time). But what about the kids? There is still precious little for the people that comics were originally invented for.

The Dandy is Britain's longest running comic - first published in 1937 (actually it's not far away from being the world's longest running comic). It's had it's fair share of ups and downs over the last 70 odd years, but mostly 'downs' in recent years to be honest (and that's not just the readership). By far the worst change to this distinguished title was back in 2007, when in a desperate attempt to win new punters, the whole format of the comic was changed. Gone were almost all of the comic strips, and in were articles on computer games, pop bands, films, toys etc etc. The name was changed to Dandy Xtreme, and for the first time in the Dandy's history it stopped being a weekly comic.
Fortnight-by-fortnight, month-by-month, the word 'Dandy' got smaller and smaller on the cover, and the word 'Xtreme' got bigger and bigger. It was simply awful. 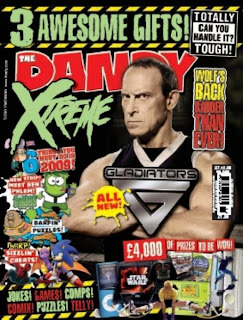 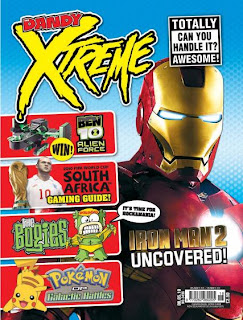 Despite keeping the issue number running, the publishers (DC Thompson) seemed hell bent on disowning the historic title, in favour of a funky new mag for kids. So paranoid were they of referring to the 'old' Dandy that they chose to ignore two major milestones - the 70th birthday in 2007, and the 3500th issue (earlier this year). But sales of Dandy Xtreme have been plummeting quicker than ever, and there have been many rumours than this grand old tradition was about to bite the dust (or at best, be merged with the Beano).

Then came the news earlier this month that all big kids like me wanted to hear - The Dandy was not heading for the scrap heap, it was to be relaunched as a proper kids comic once again. Yesterday the first issue came out - I say first, it was actually issue number 3508, but you get my drift! - and have to say it looks great!

Of course, there are a number of things that will no doubt annoy traditional comic fans - but just like my review of CLiNT, I think these deviations from the expected norm are a smart move. There are obviously not enough traditional British comic fans out there, otherwise it wouldn't be an (almost) extinct medium. So the 'all new' Dandy has gone for a bit of a TV\popular culture feel in an attempt to attract a new young readership (the cover alone boasts no less than 4 TV related strips). The big coup has to be the inclusion of a Harry Hill comic strip, which is written by Harry himself and the TV Burp team. Other strips poke fun at the X-Factor, Cheryl Cole, Simon Cowell (a whole page devoted to a 'young Simon' strip!), Top Gear, Deal or No Deal, eBay, iPods, Meerkats and Wayne Rooney. All adding to the familiarity that might just interest today's kids. Next weeks issue promises (amongst other things) laughs at the expense of TV chefs, Ant and Dec (and their mum Cheryl Cole!), Alan Sugar and Eastenders (CSI: Walford!).

In keeping with just about ever kids TV programme these days, there are plenty of stories with references to bodily functions to keep the wee ones sniggering (The Phantom Pharter, The Bogies, Count Snotula), and a few risque bits and bobs that may still shock nan (although I have to say that the inclusion of both 'Postman Prat' and the 'Shao Lin Punks' did make me smile!).

There are still a couple of old favourites, all be it in a very different style.... Desperate Dan and Korky the Cat are both original characters that started in the comic way back in 1937, so it's nice to see a little nod to the past. 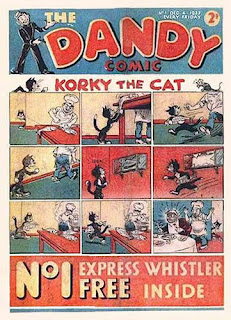 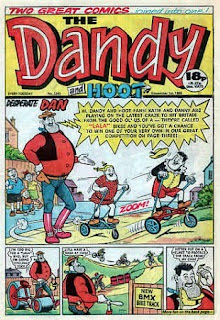 (note the masthead on the new re-booted Dandy is much closer to that of the original 1937 style, rather than the one I remember from the 70's and 80's)

All in all, the new Dandy has got a great feel to it, and really reminded me of classic 70's title Krazy comic with it mad-cap and supposedly 'anarchic' feel. The best thing of all though was that it's wall-to-wall strips, every page, not a single advert inside which in this day and age is brilliant.

And if that's not enough to tempt the child inside you to buy a copy, how about the fact that it's come down in price?!! The hefty £2.50 price tag of Dandy Xtreme, now a much more palatable £1.50.... oh, and it's back to being a weekly title again too!

Hats off to DC Thompson for pulling out all the stops on this relaunch (and in the middle of a recession too). I really hope they pick up a large new readership. My excuse it that I'm buying them for my son to read when he's old enough, but I guess we'll have to see what happens when he really is old enough! (perhaps I'd better buy 2 copies?!)

The Cow Pies are on me! 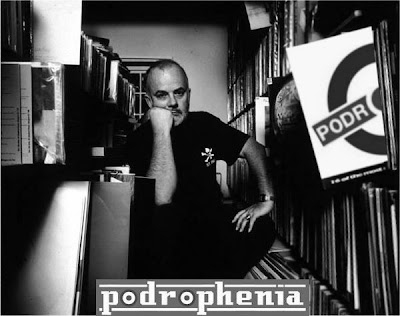 To mark 'Keeping It Peel' day today (can it really be 6 years since the great man died??), Mondo and I have knocked up another Podrophenia podcast. This month's theme is 'Sou 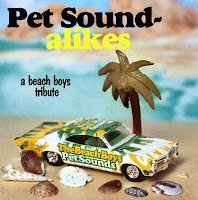 nd-a-likeys', but there's a (very!) loose Peel connection or two thrown in there too.
If you're being charitable, Sound-a-likeys are songs that have been created by artist with a love of music; an encyclopedic knowledge of song; and as their own writing has matured, the many artist that influenced them over the years has subconsciously become part of the mix.... or.... if you're not feeling quite that generous, a Sound-a-likey may have been made by someone without an original thought in their brain, and blatantly rips off everyone they can. There are ten Sound-a-likey examples in amongst the usual ol waffle in the new podcast.... you make your own mind up as to which camp they come from!
You can listen to it here:

You can also pick it up on iTunes here:
Podrophenia on iTunes
Piley
17 comments:

Maybe it was the fresh sea air, the chance to visit the longest pier in the world, or simply the lure of a plate of jellied eels... But just like all those 'trippers' back in the day, top popsters Silvery couldn't resist a little excursion from 'the smoke' to Southend this weekend.

Excellent support from two local rowdy rockers Tuppenny Bunters and Son Of Buff set the scene a treat. Silvery thundered through a selection of songs from their two albums, finishing off with their cover of 'You Give A Little Love' from the Bugsy Malone soundtrack.

The venues PA left much to be desired, but didn't seem to mar anyones enjoyment too much (although my ears were ringing for a good 24 hours afterwards!). 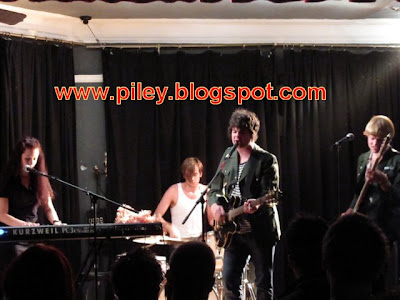 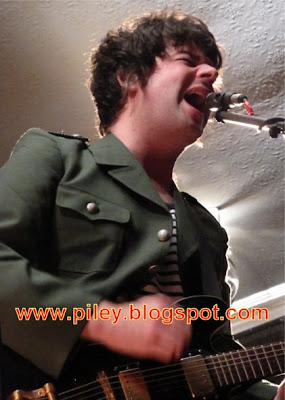 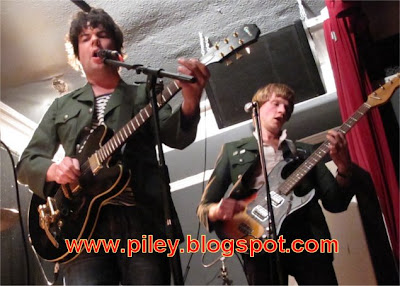 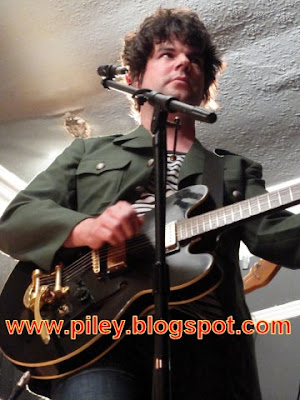 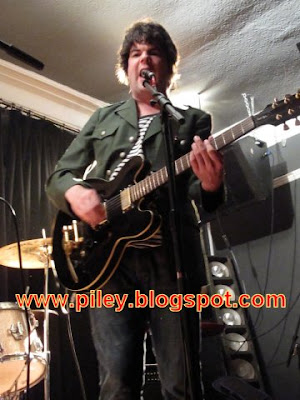 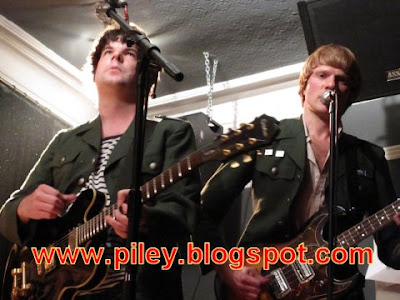 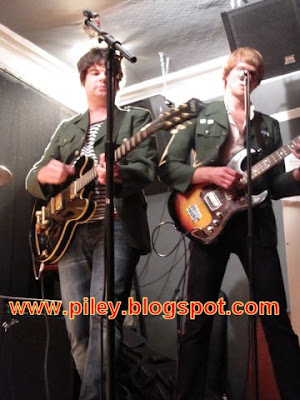 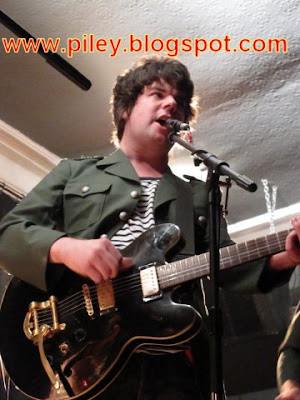 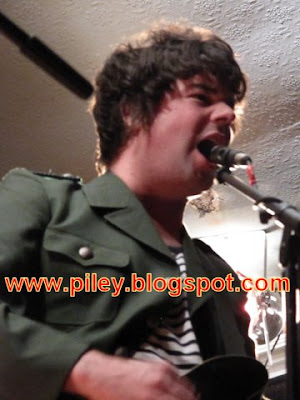 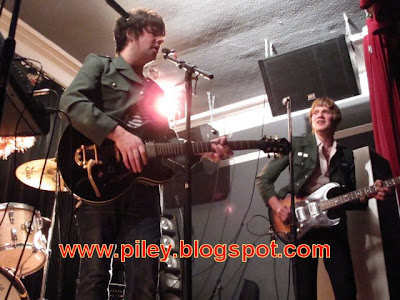 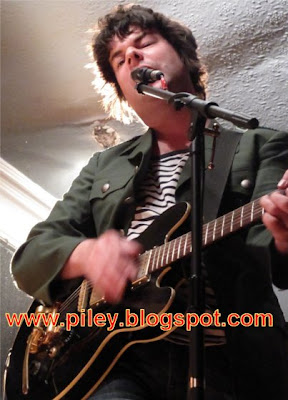 Still intrigued by the 80 year old cinema we stumbled on last week, I spent some time in the library yesterday going through a stack of Essex history books. I was drawing a blank for ages until I found a photo of Burnham High Street taken in the early 1930's. I was just about to turn the page when I did a double-take.... hold on, there on the left hand side, I recognise that building! 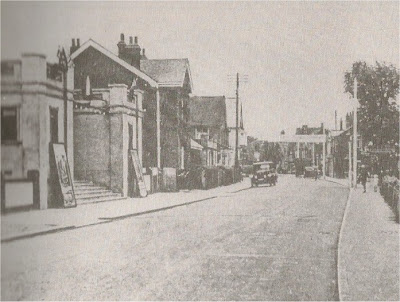 It would still have been The Princes cinema when this photo was taken.
My continued searching paid off, and I managed to find out a few more bits of information regarding the history of this building. Apparently it had another slight name change in 1937 when Francis Bertram took over the cinema, and renamed it The New Princes. CA & HA Sellers took over the auditorium in 1940, and in the late 60's Charles Crayford became the new owner, under the company name of Craydem Cinemas Ltd. It was Crayford who changed the name to The Rio, chosen to compliment the other cinema he owned - The Rio on Canvey Island. Andy Whyatt took the cinema over in 1979, and is possibly still in charge today. Meaning this cinema has remained as an independent for the whole 80 years!
I also found this picture, taken around the time that Andy Whyatt took charge: 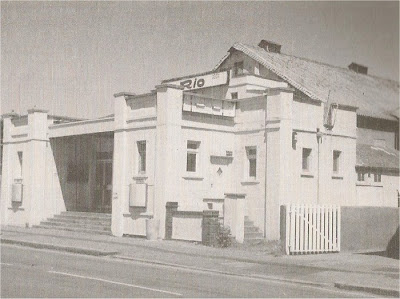 Taken from almost the same spot as I took mine on Friday.... 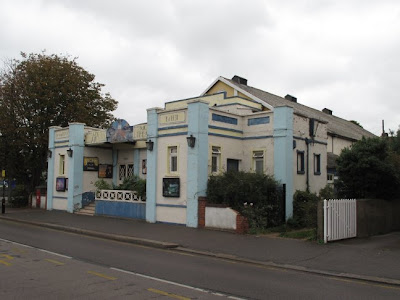 An Unexpected Step Back In Time

Well here's an unexpected little find... We braved the weather today for a drive out to the wonderfully sleepy town of Burnham (which sits on the north bank of the River Crouch in Essex).

This lovely little old fishing town has an instant time warp feel to it, and apart from a very 'out-of-place' looking Tesco (which looks as though it is a converted petrol station), the high street is pretty much completely made up of independent shops and restaurants. And it was whilst trudging through the wind and rain that this little oasis appeared...

A genuine independent cinema! It opened in 1931 as the Princes Cinema with seating for 475. In the late 60's it was renamed the Cine Rio, which it still remains today. In the late 70's it was given a refurb, and now has a main auditorium (seating 220) and a smaller second screen (seating 60).

Alas it's not open during the day on weekdays, so there was no chance of a little peek inside. However I was able to take a few shots through the window. I love everything about it... 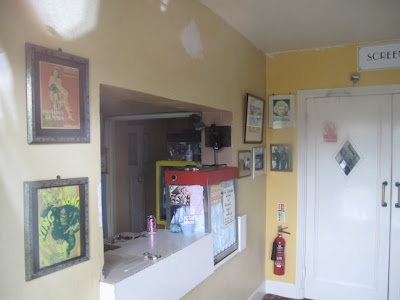 I love that the walls are adorned with pictures from the Golden Age of Hollywood... 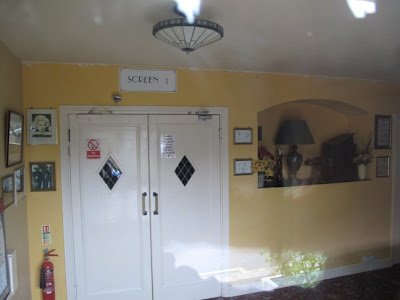 I love that there appears to be a table lamp, a statuette and some fresh flowers in the foyer... 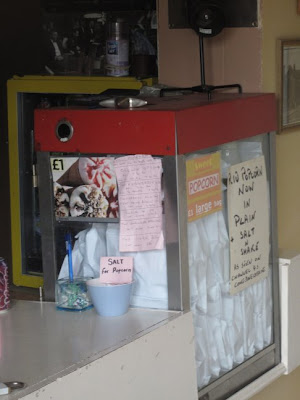 and I love love LOVE the cup of salt next to the pop corn, so that you can 'salt your own'. 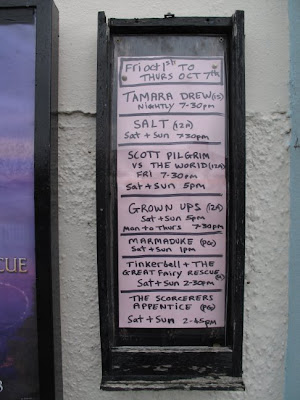 And you can keep your glossy A1 Odeon listings posters, I'd settle for a weekly handwritten list of 'whats on' any time. Brilliant.

This cinema oozed more character in the five minutes that I gazed at it (and it wasn't even open!), than my local Odeon has oozed since it was built in the 90's. Just looking at that old fashioned kiosk brought back so many memories of cinemas gone by.

I came home and excitedly hit the net, ready to learn all about the long and proud history of this old, purpose built cinema.... but no website (I'm not THAT surprised about that), no fan site, no articles, no mention on any Burnham on Crouch sites, in fact, no nothing! All I did find was this picture of the Cine Rio looking a lot brighter than it currently does, although worryingly, it was only taken a couple of years back, in 2008 (perhaps it was more to do with the difference in weather). 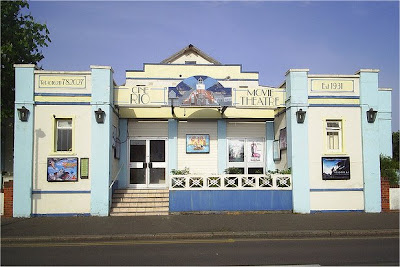 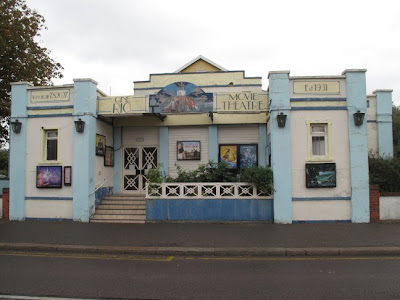 Cine Rio October 2010
I am determined to go back soon to catch a film there. It's a 45 mile round trip from Piley Towers, but I'd rather that than visit the Southend Odeon any day. I wonder if this 80 year old building could help cure my self imposed cinema ban??
Piley
17 comments: