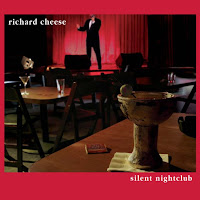 So little time, so many dodgy Christmas albums to share with you!!

I did a post some time back on the genius of Richard Cheese... So it's only right that I include him in my perverted Christmas album collection. The thing I love most about his Christmas album is, well, it's not all that Christmassy! A first glance at the track listing usually brings a "WTF?" type response, but after a closer inspection of the chosen songs you 'get it'. I mean, some of the classic Christmas toons you'll find on Silent Nightclub include Live a Virgin, Ice Ice Baby, I Melt With You, Holiday in Cambodia,
Personal Jesus, Naughty Girl.... You get the idea!

But there is a vague smattering of yuletide songs on here too, including 'Silent Night', 'Christmastime is Here' (from the classic 1966 Charlie Brown\Peanuts cartoon!), the self penned 'Christmas in Las Vegas' and the oddest version of 'Jingle Bells' you're ever likely to hear! Richard Cheese has released 7 albums of his lounge-i-fied cover versions, and always states on the album who the original was by. However I was a tad confused when he gave an original artist for 'Jingle Bells', I mean, nobody has cornered the market on this track have they? Surely there is no need to mention any one artist? But once I played it, the whole thing made sense! It's genius! and it's below for you to listen to right now... no, don't thank me, just think of it as an early Christmas present!


If this has got you going, and you want more Sinatra-fied cover version madness (and who in their right mind wouldn't?!) check out my previous Dick Cheese post HERE, where as well as his festive version of Holiday in Cambodia (!), you can also here his take on Radiohead and Slipknot!