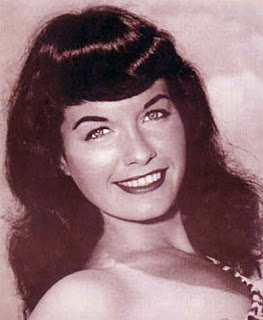 I heard that she had suffered a heart attack last week, and had been in a coma ever since, so I was kinda expecting the worst. Yet the news that she died this morning still came as a bit of a shock. Weird really, as for 30 odd years everyone thought she was dead anyway! I'd only just got used to the idea of her actually being around again, and now she's gone. For good this time.

The legendary 1950's model has been a cult figure for over 50 years, loved by millions, yet completely unknown by millions, all at the same time. Someone at work today asked me about her, and the best I could do in one sentence was say she was like an underground Marilyn Monroe (since then I've heard that Page will be burried at Westwood Cemetary in California next week, the same place where Monroe is burried).

I discovered Bettie in the mid-80's and have been

infactuated with her ever since. You know how you get into stuff, really buzz about it for a bit then lose interest? well it's never been like that with Bettie, and I've remained completely fascinated with her throughout... hell, I even have her tattooed on me! (yes, really!). When she resurfaced in the 1990's she signed up with CMG Worldwide agency, and to earn herself some money, she agreed to autograph photographs for them to sell. Apparently it took her about 10 minutes to sign each autograph, she ended up not doing that many, and the asking price was extortionate.... it's still the best thing i ever bought....

I've been meaning to do a Bettie Page post since I started this blog, and I will do a proper one at some point. But for now, RIP Bettie Page.

Oliver Postgate and Betty Page in the same week - clangers and bangers you could say!

I'll be firing up my Las Vegas Grind albums as a tribute - well worth grabbing P, be right up your Boulevard.

Nice obit Piley. I don't know that much about Bettie really but she seems to have touched many peoples lives. I know I prefer her to Monroe any day that's for sure.

I've always had a thing for her too (though i'm not in your league P). You should do that Bettie blog soon mate. If you think of how many models get photographed in every era , literally thousands and most get forgotten it's incredible how Bettie kept a following , lovely looking girl. Tempest Storm mmmm there was another broad . Jimmy Carl Black of Frank Zappa and the Mothers and Mitch Mitchell of Jimi Hendrix Experience both died recently too.You always seem to get a spate of hero's (and heroines)go at once. Makes me sad, still they will never be forgotten. RIP.

Have to say she had passed me by - or the other way round probably. wierd how you only find out about someone once they've gone... then it's too darn late in many ways.

I'd have to confess to being one of the millions that was not aware of her but it's always sad when one of your heroes/heroines goes. Like you said, although your life hasn't changed, it can still feel like something is missing. Strange really .