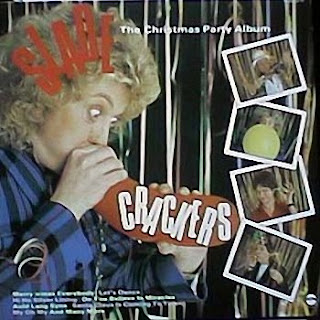 Continuing the delve into the stranger side of my iffy Christmas record collection..... Slade's 'Crackers' album was originally released over 20 years ago in 1985, and it's one of the few 'LPs' that I still regularly dig out and give an airing to (only at Christmas tho... i'm not THAT much of a Christmas pervert!). If you can get by the naff cover, this album is actually a right 'ol rocker! But then, Slade always did rock didn't they? Hugely underrated by the music snobs... (yet Oasis were trying to be Slade during much of the 90's and everybody loved that!!).

Not really a Christmas album in the traditional sense, this is more 'party' fodder, mixing cover versions, Christmas songs and Slade originals. But by and large it does the job well, and is worth the money just for the rousing covers of 'Santa Claus is Coming to Town' 'Let's Have a Party' and 'Lets Dance' (the Chris Montez track, not the Bowie one). Slade always did have the knack of injecting some atmosphere and fun into their recordings (I mean Merry X-Mas Everybody still does the trick 35 years on doesn't it?!), and on the whole they succeeded in fueling this album with plenty of that party spirit, full of crunchin' guitars and Noddy Holder's shouty vocals! 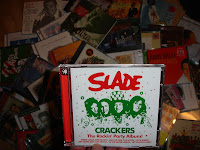 in the racks, and with a much better 70's style cover to boot. A snip too at just three of four quid, and I snapped it up.... but buyer beware, it isn't quite a straight copy of the original release. There are no less that FIVE tracks missing (We'll Bring the House Down, All Join Hands, Do You Believe in Miracles, My Oh My and Run Runaway). I'm guessing here, but as this album was a mish-mash of specially recorded tracks plus recent (at that time) Slade singles, my bet is the licencing for the singles was owned by someone else, and it was probably easier just to remove them rather than get involved in multi-licencing. Still for the pocket money price, you can't go wrong with this one. The low point is an ill-advised cover of 'Do They Know It's Christmas (Feed the World)'. I guess you can forgive them for trying, and it was probably quite an 'up to the minute' track at the time. But it sticks out like a sore thumb now, and although it is the most recent song on the album, bizarrely, it is the one song that makes the album look dated.

Here are a couple of tasters from 'Crackers', one Christmas-y the other not so:

SANTA CLAUS IS COMING TO TOWN:


LET'S HAVE A PARTY: 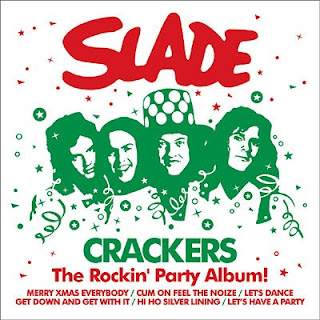 Bloody Hells Bells - totally forgotten about that album P - you're right - what a rocker, it was my getting ready album for all Christmas tear-ups in the 80s, didn't it have the Hokey Cokey on it?

And apart from Oasis, Slade were a massive influence on The Ramones those high-level, heavy stomping rockers were Slade shaped - Oh yes, all true, and check the haircuts Dave Hill inspired - I read it in Please Kill Me Legs McNeill's excellent US punk biog

I'm at a loss to comment.... other than maybe just maybe I've found someone with a more bizarre collection of old junk than I.... :-)

Mondo - Yup, the Hokey Cokey is on there!! and remains on the budget, cut down Tesco version too!

Furtheron - for the other 11 months and 2 weeks of the year, I can assure you that I am quite the music snob, honest! It's just for these two weeks when my senses leave me! Although I've not got a problem with Slade any time of year to be fair!

Normal service will be resumed... soonish!

AAGGHHH It's Ramones, not THE Ramones, im really sorry this drives me nuts. It's The Clash , The Damned yeah but not THE Ramones or THE Sex Pistols. Same with Faces no THE. Sorry i'm having a bit of an up tight moment here but this drives me radio rental !!!!. I like Slade but i thought this album sucked my brother in law had it and i was sooo disapointed when i heard it. I've really lost my sense of humour aint i ?.

As i've said before, all my standards go out the window for Christmas. Put this album up against some of the classics from Noddy n co (Slayed?, Old New Borrowed and Blue) it's not even on the scale. But i'm just judging it as a Christmas party album, nothing more nothing less. and as far as that goes, it does what it says on the tin. But yeah, agree that as a Slade album, it's not the best... does that make sense?? it does in my head!!