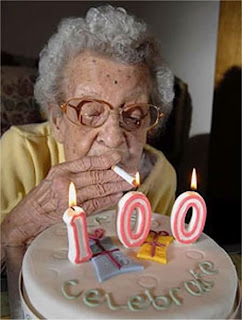 It wasn't something I was keeping a check on, but I was just about to start drafting a new post a few minutes ago, when I caught a glimpse of my 'blog archive' over on the right there...

So this is my 100th post! Not much of a feat I know, especially when compared to some of my bloggin buddies (Furtheron has almost chalked up 100 THIS YEAR ALONE for example!), but y'know I was never going to be able to bang out dozens of posts a month, and when I started bloggin I was only a month away from becoming a dad, which has kept me rather busy! So in my own way, I'm pleased that I've at least been able to keep a fairly regular bloggery going.

Right, I'll carry on with that post now! See you in a bit!

I don't know how you find the time mate. But i'm glad you do. I seriously don't know where time goes and it worries me mate.

Have I? Hmm too much time not enough substance in my life perhaps... :-)

btw it's quality not quantity that matters - maybe I should listen to my own advice on that...