Eddie and the Hot Rods are one of the biggest and most successful Pub Rock bands in British music history... but in MY part of the country, they are nothing short of legends! 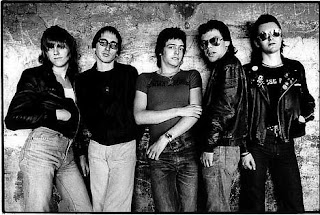 Formed in 1973 just up the road from me (in Southend, Essex), their original name was Buckshee, but was changed to Eddie and the Hot Rods in late 1975. Their blend of R&B, 60's\70's Britpop and rock, mixed with a truly mesmerising stage performance, ensured they went down a storm on the emerging pub rock circuit... They were 'punk' before the word had even been invented... in fact, Eddie and the Hot Rods were the 'missing link' between British 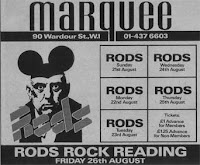 pub-rock and British punk-rock (Just check out their debut album Teenage Depression if you don't believe me!). During a residency at the Marquee club in 1976, they were even supported by The Sex Pistols.

Eddie and the Hot Rods hit the charts on a number of occasions in 76 and 77 ('Do Anything You Wanna Do' reaching the top 10 in August 77). After a few changes in the line up, they eventually called it quits in 1981. Since then there have been periodic re-forms, but the success of a get together back in 2000, has kept them busy and together ever since! They continue to perform to packed houses all over the world, and this month see them off for a 16 date tour of the USA. On their return from the States, it's a scoot round Great Britain (local readers note, there is a chance to see the boys in action at Club Riga on 20th June), followed by a tour of Poland and Germany at the end of the year... like I said, they are being kept very busy!

Despite the changes in the line-up over the years, there is one man who's been there throughout, lead singer Barrie Masters. Barrie has been kind enough to put the USA tour preparations on hold for a bit to answer my 19 questions, so without further ado, lets here from 'His Masters Voice'! 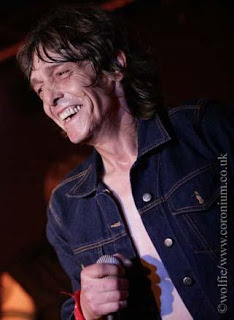 2. Where are you at the moment?
I'm still in Southend.

3. Who inspired you as a child?
didn't really have 1 person but it was mainly boxing champs, that's what i was into at school. 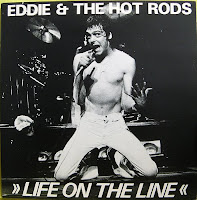 4. What was the first record you ever bought?
Cant remember probably a Rolling Stones record.

6. What was the first gig you ever attended?
Rod Stewart and the Faces.

7. What was your 'biggest break' or 'luckiest moment' in establishing your career?
Biggest break was meeting and getting signed by Island records.

8. How would you describe the music you make?
Loud exciting music that makes you feel young.

9. What's your most 'Rock n Roll' moment?
Appearing in the sun as the page 7 fella and having a beer with Keith Moon.

10. Worst moment of your career?
Drugs

11. What are you most proud of?
People from all over the world still tell me that our music changed their lives. 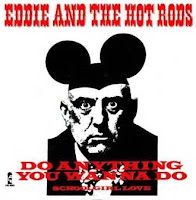 12. One bit of advice you'd like to be able to give the 17 year old you?
Don't do hard drugs, don't trust your manager.

13. If you could perform with any artist (dead or alive), who would it be?
Jim Morrison.

14. Name one artist you really think I should check out?
Prima Donna from the USA.

15. What's currently on your iPod\CD player?
I don't have one!

17. Which song do you enjoy performing the most?
I enjoy all the songs we play.

18. What are you working on at the moment?
Working on writing a new album for a USA record company release/ USA tour dates and promo.

19. How can people find out more about you?
www.eddieandthehotrods.com 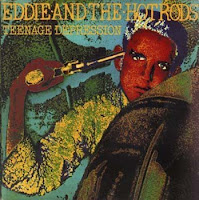 Thanks Barrie for a cracking 19 answers!

Whilst over at the official website, be sure to check out the merchandise, where you can get a reproduction of the classic black and white Teenage Depression t-shirt. I remember when I was at school, they used to have this shirt for sale in the small ads of NME, Melody Maker etc etc. I thought it was the coolest punk t-shirt ever!

EDDIE AND THE HOT RODS VIDEOS:

Do Anything You Wanna Do - Performed on the last ever episode of Marc Bolans' MARC TV show - Recorded on 7th September 1977 (9 days later, Bolan was dead). This is the same show that included the Bowie\Bolan jam at the end of the programme, where Bolan falls off the stage!


And just to show they have lost none of that spark, here's some clips of Barrie and the boys performing in 2005:

One of those bands that were just clipped and pipped by punk despite having the Sex Pistols as support band, popping up on the back of The Damned's debut album and playing the first ever Punk festival in Mont De Marsan (one month pre the 100 Club 76 do)- I posted Do The Monkey Man by 'em last month - a great forgotten tune..

They were MY BAND back in the early 70's. They were the first band I ever saw and as such I followed them slavishly for years. Those Maquee gigs were the stuff of legend. I was there almost every time they played. I'd give my hind teeth to get a support slot for Magic Ship with them when they next play the Halfmon, Putney (they followed us in the following night last time). They were our drummers first band too. Great post P. Get out of Denver baby!

You are right Mondo, and never get the credit they deserve (funny enough, much like the Damned).

Col - great stuff mate. You see the Pistols supporting them too? I think Magic Ship are long overdue a gig in deepest, darkest Essex... wonder if the support slot for the Rods is still available for the Riga date in June???

Remember them well... however for me it had to be that other pub rock band... Dr Feelgood. I saw them about Malpractice days playing in Chatham with Wilko in full "mad man on a coiled guitar lead" mode... Brilliant!

Great stuff Piley. I love The Hotrods. When I first started work in the early 80's I used to work with Graham Douglas' mum Doris. I still see her about in Southend and we always have a chat when we meet in Sainsbury's/ Rock and Roll eh?

Further - Yup, The Feelgoods were class... another great band from 'round arr way'!

Marmite - Good 'ol Doris! Sainsburys is the punk supermarked tho aint it??!

On the subject of Mrs Douglas' lad... boy could he play guitar?? His work on 'Life on the Line' is right up there with anything i've EVER heard. Fantastic.

Very cool, but who IN THE HELL would pick Jim Morrison to perform with ?!?

Great band seen em a few times always cookin'. Telephone Girl is my fave Hot Rods track. Along with Dr Feelgood they were putting that energy back into it just before punk hit. A rock n roll band really.

I use to have a copy of teenage depression but sold it during one of my money shortages. Never got to see them but always liked what I heard. If i remember correctly their bass player (Paul Gray??) stood in for Pete way on UFOs farewell tour (late 70s/early 80s).

thanks Heff... Jim was pretty cool in his day tho eh??

Spot on Anon - Rochford boy Paul Gray joined the Hot Rods in 76 (replacing original bassist Rob Steel). He was then 'poached' by The Damned in 1980! He was with the Damned till about 84, when he joined UFO.

Unfortunately Paul now has severe tinnitus, brought on by the years of live music, and has now had to pretty much give up the game.

9. What's your most 'Rock n Roll' moment?
Appearing in the sun as the page 7 fella and having a beer with Keith Moon.

10. Worst moment of your career?
Drugs

I would switch the answers with the questions for these two LOL!!!!!!

I saw Mr Gray with UFO at the Cliffs Pavillion on the Making Contact Tour farewell tour and he later joined the band full time with only Phil Mogg and Paul Raymond among the "proper" UFO guys. I heard his liver was really bad too at one point. I know a guy who played with the Hot Rods in the 80's and 90's called Warren Kennedy , a fucking great rock n roll guitar player.

Makes me want to put on a cap sleeved T and monkey boots.


Essex gig? Why not. Where do I send my rider?