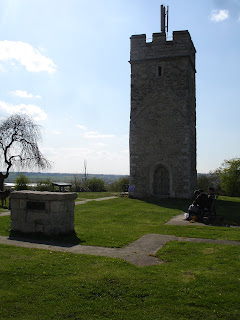 If you are one of those with limited time on your hands, and think this looks like some boring history lesson, PLEASE just fast forward to the pictures at the bottom of the post, I wouldn't want anyone missing the weirdest gravestone I've ever seen!!
Pitsea, Essex... the unofficial capital of all things 'Chav'. It's not a place particularly known for its heritage, culture and art... there's a McDonalds AND a KFC (both drive-thrus!), a LIDL, Aldi AND a Farmfoods, there's several burger shops and kebab huts.... But hidden away in this concrete jungle is quite an interesting piece of history. Perched on top of a steep hill ('Pitsea Mount' to give it it's proper name), are the remnants of St Michael's church, which is mentioned in the Doomsday book... These days it looks rather like a low rent, scruffy, run-down version of Glastonbury Tor, but Pitsea Mount must once have been the focal point for miles around. Today it is mostly 'lost' by the town that has risen around it, in particular the flyover that now obscures it from any decent view.
The church was originally built in the 13th century, although much of it was rebuilt over the years. All that remains now is the tower, which is believed to have been built in the 16th century. The 'outline' of where the rest of the church once was is still visible, and incredibly, the font and alter are still standing (now out in the open of course) - you can see the outline and the alter in the picture above. In theory it's a nice interesting place to visit, and could be an lovely spot to sit and contemplate the world for a while... but every time I've tried to have a good look (most recently last week) it always seems to be over run with Vicky Pollard types with unruly, unleashed Alsatians, drunks, druggies or hoodies. There are a number of crumbling graves surrounding the church remains, and one in particular really took my eye.... 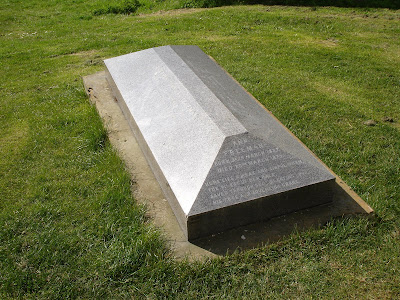 Just behind the church tower is a family grave for the Freeman family... What looks to be like a Mother, Father and two daughters, nothing out of the ordinary for 3 of them, yet one of the daughters, Ann Freeman (born March 1837, died March 1879) has the following inscription:
Here lies a weak and sinful worm,
the vilest of her race,
saved through God's electing love,
his free and sovereign grace
Which even today seems a bit harsh! 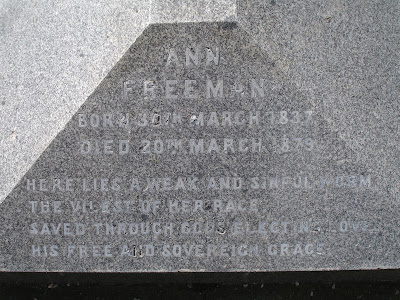 Apparently the grave has intrigued people for many years, and nobody has been able to fathom out why she should have been given such a hateful gravestone. Original schoolboy rumours that she was a witch are all unfounded, and recently, someone even managed to trace her in the 1851 census, which showed her at the age of 14 working as a servant for a piano maker in Paddington. She remained a servant until her death from heart disease at the age of 42.
I've never seen anything like this before, and I guess it will always remain a mystery as to why it was felt she deserved such a disrespectful epitaph. 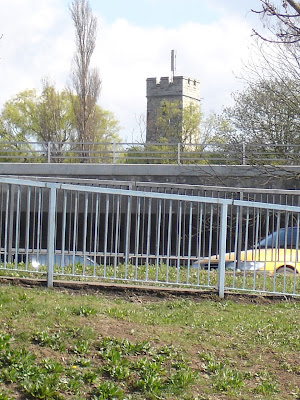 You can't leave it like that Piley! You need to get to the bottom of this. Sounds like the ideal subject for a new Living TV show called "Who the bloody hell did this bitch/bastard think they were??"

Richard Wilson could present. The intro every week to be "WHO the BLOODY HELL did...etc", with contributions from that bloke that goes looking for ghosts.

Don't forget she lived in Pitsea so the inscription was probably the nicest thing anyone ever said to her. Not as good as this unfortunate obituary.

Don't forget Wat Tyler who led the Peasants Revolt. He ws a local lad. Lidl wouldn't have been there in his day but the old market (with the domes) probably was.

He would have bought all his gear of Alf Cohen.

well, i for one, would love to get in a time machine, and party with THAT chick!

OP - Come on, admit it... you're in the game ain't cha?! With a million dollar idea like that??! We gotta get that charlatan derek acorah involve too... funny, I started typing his name into google to check the spelling and the 2 options if automatically brought up were "derek acorah fake" and "derek acorah fraud" haha!

PH - Now you cometo mention it, i guess you're right!! She were lucky to get such a glowing tribute!

MM - I've seen pictures of that Wat Tyler fella, he used to buy stuff off the Cohen brothers in the corner in the 70's I think... y'know "not 5 pahnd, not 4 pahnd, I aint even asking for 3, oo'll gimme two quid?"

Nazz - No need for the time machine my friend, there are many of her ilk still alive n kickin in Pitsea today!! A plane ticket will do ya!

That Gravstone was pretty cold, lol !

She clearly was liked then... how odd. We need further investigation and get to the bottom of this I thinks.

And another bloody good reason for my plan to be cremated so my lot can't do something similar to me... :-)

You know what they were like back in those day's P you only had to miss church one Sunday and you were satan's bed fellow. She probably liked a drink a smoke and a screw or may be a rug munch and was there fore cast into the firey pit by her fellow medi evil Bas chavs for being a witch. These day's days she'd probably have a statue in the town center and be held as a shining example in Bas. At least she had a job and was not on benefit's by the sound of it eh ???.

How did you stumble across this nugget P.

Oh that's brilliant. Essex is PACKED with history; a consequence of it always having been a relatively populous area ( see, people have ALWAYS wanted to live there!). Waltham Abbey is another gem surrounded by Aldis and KFCs - though I didn't see anything quite as odd there as that woman's tombstone.

Further - would love to find out more, but not sure there's anywhere to go to get it... think it'll always be an unsolved one that.

PM - I found it last year funny enough... went for a walk up there because i'd heard the remains of the church were quite interesting. Had a look round the graves whilst there (as you do!) and spotted that little treat! Incredible! Was chuffed at the find, then promptly forgot about it! Went back a couple of weeks ago, although it was a spur of the moment thing, as we'd been shopping in the Tesco there. It was a nice day so we thought we'd climb up there again. When I got there I remembered the grave and as luck would have it, had my camera on me. Did a bit of surfing on it when I got home and that's how I found out the few bits about the census etc. You should pop up there for a look mate.

ISBW - Good to have you back! Your trip sounded fab! Glad you liked the post, and you are right, there's a lot more to Essex than people would have you believe. Some great history, and some of the most picturesque villages in the country (not Pitsea tho!!)

Strange that despite the spiteful epitaph they still had her buried in the family grave.

She probably wrote her own epitath, or someone who loved her wrote it. It acknowledges her sin and that she is not worthy of God's mercy, but receives it anyway. Exactly the same is true of all sinners, that is all of us. The epitath is an artistic expression of love and gratitude for God.

ive doone research on that grave mainly becase me and my friends were bored and from wat i can see most people belived her to be a witch infact nearly all the searches ive done always point back to her bein named a witch depsite the fact that the witch trials were considerably earlier than her birth and it would have been very unlikley that they would even consider a burial of a witch in a graveyard....

I went up there about 10 minutes ago and saw that somebody has made a hole in the brick work and you can see inside. It looks like a tomb with stone walls going deep into the earth. That's unusual for a grave isn't it? I couldn't see a coffin or anything, just a pile of rubble and an empty beer can. I took a photo.

Just to clear this up, she was a member of the prespertarian church.

which considers all its members to be sinners, only death and gods welcoming arms can clean them of their sins on earth, sorry to dissapoint but no witch burried here

go and have a look at the Pirate grave stone http://www.canveyisland.org.uk/forum/pictures/prosser/now/skull.jpg

Not a pirate gravestone I'm afraid - the skull and crossed bones is one of various common motifs of 'memento mori' - reminders to the living that death comes to us all. Hourglasses, skeletons, funerary tools etc all appear on memorials from the medieval period to the early 19th century.

Its a shame that the original weather vane is missing,it was there in the 70s& 80s as I have a photograph of it !

Tombes Heard back in the day that Ms freeman may have been into a spot of infanticide with two of her offspring.I can only imagine it must have been something pretty awful to have marked her for all time in this way.It was Church practice to bury witches against Church walls as well as under the twisted roots of yew trees to stop them wandering about after death.It is strange this was done in the Victorian era.It's hauling not knowing.p.s.in a Cornish museum(Boscastle)there is the remains of an Essex or Kent witch who was nailed into her grave at a crossroads which was another practice of the dark ages.I shall endeavour to find out more about ms Freeman although finding parish records might be difficult.