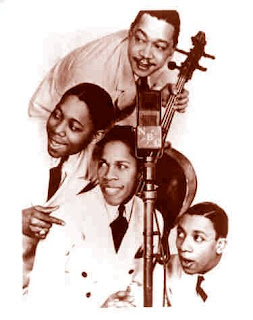 It's not something I was really aware of at the time, but one of the real bonuses I got from having 'older' parents was the music that I was brought up with. At school, many of my friends had mums and dads who were into the Beatles, the Rolling Stones, The Who etc etc. But mine were fans of music from decades earlier, and I was brought up on a heavy diet of easy listening... Sinatra, Crosby, Mathis, Nat Cole etc etc. I don't think I appreciated that much of it at the time, but it was the soundtrack to my early years, and as I've got older, I've noticed that much of it has matured in my brain, and I now genuinely enjoy most of the artists that my parents liked. I see this as a complete 'Brucey Bonus' as this is in addition to all the music I've discovered on my own. It works like a dream, and the combination of the two gives me an interest in music spanning from the 30's right up to today, and I'm pleased to be able to appreciate such a wide variety of music. And I really don't care if it's cool or not, if I like it, that's good enough for me!

The Ink Spots... even the name is iffy. But I guess the 1930's were pretty unenlightened times, leading to four black guys from Indianapolis (Orville "Hoppy" Jones, Ivory "Deek" Watson, Jerry Daniels and Charlie Fuqua) being given the name 'The Four Ink Spots'. Formed in the early 30's, they were one of the pioneers of a new style of music called 'Jump'. In time, Jump would lead into Rhythm and Blues, and ultimately, Rock n Roll.

In 1936, Jerry Daniels was replaced with a ballad singer called Bill Kenny, and their style changed to a more laid back croonin' sound. Success finally came for them in 1939, when they released the single If I Didn't Care, which would turn out to be their biggest hit. Believe it or not, If I Didn't Care, is STILL number 10 in the list all time biggest selling singles - Worldwide! It shifted 19 million copies, which is impressive enough in itself, but it's even more so when you compare it to what else is up there with it (and what else ISN'T): 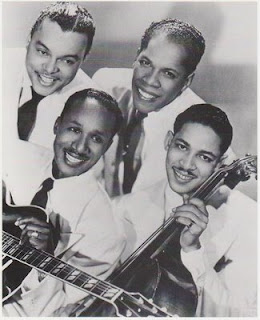 There is something about the sound of the Ink Spots that sends me back... bizarrely, it's back to an era that I don't even know, but it's a cozy, simpler time. There is something dreamy and comforting about Bill Kenny's incredible tenor voice and the way it contrasts beautifully with Orville Jones' deep bass vocals. Listening to them also reminds me of 'old skool' Sundays, when nothing was open, sitting around the house listening to programmes like Family Favourites on BBC Radio 2!

The Ink Spots toured England a number of times, first making the trip in 1934. My father has vivid recollections of seeing them at the London Palladium in September 1949, although by this time, they were certainly past their peak, and had had numerous changes in line-up (but Kenny was still on lead vocals when my dad saw them).

It's pretty twee sounding stuff today, but in their own way, they must have been pretty revolutionary at the time. They may not have known it, but they certainly did their bit to pave the way for the pioneers of Rhythm and Blues in the late 40's.
Other than their recordings, very little remains of the original Ink Spots (officially, they continue to perform to this day, with a 'conveyor belt' approach to the line up). Not the original line up, but here is a clip of one of the later line ups (still with Bill Kenny on vocals) performing Do I Worry as a musical interlude in the 1942 Abbott and Costello film Pardon My Sarong. Orville Jones has gone by this time, and his replacement is awful! A horrible rasping voice that is quite unnerving!


Sit back with a cup of cocoa, and listen to 'I Don't Want To Set The World On Fire'

The 19 Million seller 'If I Didn't Care'

Man alive - 19 million. Incredible.I'm not knocking them I say this - but what a stunt, when most of the catalogue is..well, so similar - the little intro motif, gospel/barbershop style harmonies and the spoken middle eight..

A great sound though , the sort of sound that Tom from Tom and Jerry's band would have had. If he ever started one that is.

My mum-and-dad equivalent would have to be musicals Oklahoma in particular being a fave as a nipper...

I grew up on a wierd diet of stuff beacuse my Mum and Dad are older than most of my mates parents too. I remember going to a mates house when i was at school and his Dad was into Sensational Alex Harvey Band and Queen, i was really impressed. My Mum loves Perry Como, Johnny Mathis and Vic Damone etc and sorry i hate the stuff.Although i do still have affection for Nat King Cole, what a singer.Although i also remember enjoying musicals like On The Town and High Society.

My Dad on the other hand loves Jazz and Blues, NOT modern Jazz but New Orleans type stuff, Sidney Bechett , Louie Armstrong etc amazing players and stuff like Count Basie and Blues like Big Bill Broonzy, Josh White and Memphis Slim. The blues stuff had an impact on me and i still listen to some of it, i took my Dad to see Memphis Slim at Putney Half Moon one time, it was the tits.For me Blues is where Rock N Roll came from !! as Muddy Waters said The Blues Had a Baby and they Named It Rock N Roll. Later when i got into Led Zep, Humble Pie and Faces etc i realized they had listend to all that blues stuff.

I have to say i've always struggled with Sinatra and Dean Martin and stuff because when i was a kid i had a lot of snooty adults telling me it was "the real deal" and that rock music was "just a fad" hmmm really, don't think so. Some of it makes me cringe, though i often like the big bombastic backing, not so much the singing. Stuff like That's Amoure is utter shite as far as i'm concerned (sorry)Paul Anka is better than both of em i reckon too. The older i get though i realize how we all pick stuff up from all over.In my collection i have stuff from Ma and Pa, stuff my sister was into and stuff i got into for my self.

Like you Piley i like what i like and i don't care what is cool, if it sounds good it is good (as the legendary and excellent Count Basie said !!!).

Sorry for extented reply, this post has taken me back in time a bit.

Blimey... like Carl this has taken me back to being knee high to a grasshopper and that old Dansette record player of my Mum's and the 78 collection that somehow got lost years later...

My Dad loved the Inkspots.

Whispering Grass - later covered by Windsor Davis and Lofty out of It ain't half hot Mum - that was one I always remember. A lot of the stuff my Dad liked I hated, Mantovani, Harry bloody Secombe etc. but the Inkspots were a stand out for me

Mondo - re the 'similar' comment oh completely!! I remember as a kid my dad had a double album of them which seemed to contain hundreds of tracks. Everything on it was in order of release and I found it hilarious to find each and every track using the exact same formula... spanning something like 15 years! same intro, same pace, same talking bit in the middle... the funniest thing about this album of my dads was that tracks 1-99 (well it seemed like that!) were all the same, and track 100 was completely different! But it was the last track, as though the fans had revolted at this experimental outrage, and it killed their career!

Carl - Yeah, it's funny how these thing creep into the subconsionce isn't it? I guess there is always something special about those days as a kid, and maybe there is something extra that your brain gets out of those songs eh? I am a big Sinatra fan (saw him live twice), but Anka is right up there with him, although he doesn't get the credit he should really. Sinatra rated him very much too.

Furtheron - Cor yeah, had forgotten my 'first record player'. A hand-me-down that was like a big square red box with a flip up lid. You could load the thing up with a bout 20 records in one go, and as each record finished, another would crash violently on top of it and start to play!! No wonder all those old 45s you see about are always so fucked!

You were lucky there. I had older parents too, but all I got from them was Jim Reeves. Mum liked Neil Diamond, but I scorned him until quite recently.

Your parents did you proud there.

I'm afraid that is Hoppy Jones doing the vocals on the filmed version of "Do I Worry". Jones was with the group through June of 43' when he got ill and died soon afterwards.

The arrangement done for the film seems a little difficult, there's a slight time shift which may be throwing both Jones and Kenny off a little. I think I'm hearing some uncertain starts at certain points. Jones' part is difficult because he has make his spoken vocals sound natural, and he has them timed so that they segue into the restart cue.

These four are the Ink Spots members that recorded the Decca single around the same time.

That IS Hoppy Jones doing the Bass part...