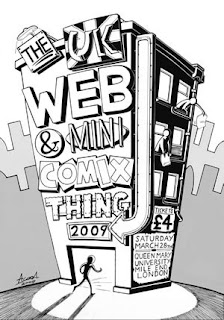 I've mentioned in previous posts (like HERE for example!) that collecting\reading comics can have a pretty bad 'rep' in some places. Yet the medium is so diverse these days, I'm convinced that there is a comic book\graphic novel out there for everyone, if only people would give them a go.

Well if collecting comics has a bad rep, imagine the stigma associated with attending comic conventions!! Yet the other week, Mrs P and I attended the coolest comic convention I've ever been to... The UK Web and Mini Comix Thing is a yearly event held in Mile End, London. It's a chance for independent artists to get out there and ply their wares, and for once, not be overshadowed by the Marvels, DCs, Dark Horses etc etc, that dominate the comic world.

The event didn't have the feel of your usual comic convention, and you couldn't help but be impressed with the effort and passion that had gone into every single stall-holders products. This is truly a labour of love thing, many of the artists looked very bleary eyed, due to staying up all night putting the finishing touches to their comics... Of course, some had been able to obtain professional print runs for their titles, but many others had printed, bound, and on some occasions even 'coloured' their treasures all by hand... which I must say were the ones I was particularly interested in. 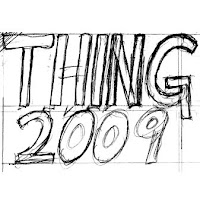 ps for the much missed DFC, and it was particularly interesting to see what else these people had to offer... quite a bit as it turned out!

The person I was most keen to visit was Sarah McIntyre, who we first became aware of via her wonderful 'Vern and Lettuce' strip in The DFC. In recent months I've also become a regular reader of her very lively blog, where I have been able to get a glimpse of some of her other amazing work. Her style of drawing really appeals to me, and I was eager to pick up more of her handy work... and on finding her stall I picked up one of just about everything she had for sale! Sarah was an absolute pleasure to meet, and her enthusiasm was extremely infectious. She chatted away as though we were old friends, and she happily signed all the items I bought. She even personalised a beautiful art-print for our son, which is now framed and proudly hanging on his wall!

But that's not to say the other artists were not friendly, everyone we stopped and chatted to was very pleasant, and keen to talk about their work and how it came about. All of the titles I bought were signed by the artists, and some even did a sketch inside them too. Here are the little gems I came home with. 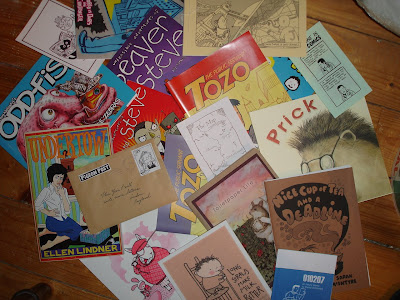 On return I've been delighted with the quality of just about everything I purchased at 'The Thing'... But I must just give a special mention to the fab "This year I Will Write More Letters..." that I bought from Sarah, which is a mini comic book in the form of a letter. The 'cover' is an envelope, and the 'title' is the address on the front. The content is a 5 page (drawn) letter, in which Sarah recalls a special book that she made for a friends young son in Connecticut... It's a joy to read, and I just love the whole quirky idea to publish it in this way. 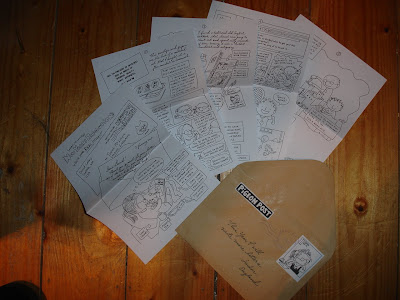 All in all a great day out, and I will be sure to make it a regular in my calender.

You can see more reviews of this years event (with photos too!), plus more photos of some of the goodies that were on offer at the following pages:

See what Sarah McIntyre made of the event on her blog post. She has some great photos too!

Shug gives an in depth review of his day behind a stall, plus loads of photos.

Stephen Betts wrote a great review over on Comix Influx

And yet another fab review and photos over on Mondoagogo

I'm gonna have to get on this P, and make a date in the diary - although I am (and always will be a shameless sucker for cape and cowl action)

Piley, I was in half a mind to attend this event, but decided foolishly not to. Looks like a missed an opportunity to meet some interesting cartoonists and buy some innovative small press comics too. I will make an extra effort to attend next year's event!

Like you, I thought Sarah McIntyre's 'Vern & Lettuce' strip was a beauty, so I'm keen to find more of her work. I'll be sending off for the 'comic letter'in the next couple of days - that is, if she has any left for sale!

It's reassuring to see so many new and innovative cartoonists still interested in creating comics in Britain. Long may it continue

Piley, can you remember to post a blog just before the next event is due!

PM - it's well worth a look next time. There was a bit of superhero stuff on offer, but like everything else, it was homegrown, low-print run stuff. But still could be quality stuff. If I had to sum up the event, I'd say there was something for everyone.

Dave - Yes, I knew you were considering it, shame you couldn't make it. If you can get your hands on the comic letter you'll be delighted with it. Sarah needs a mini-store on her site or blog... but it'll keep me permanently poor!

look forward to seeing you both there next year!