Root Beer and Other Junk!

A while back I was banging on about the joys of the bargain 15p chocolate bar... Fortunately the Freddo bar is readily available, but there is more junk that I crave that I just can't seem to get my mits on...

ROOT BEER -
When I went to America in 1980, this crap was everywhere, and seemed to be the only drink available! My dad had many relatives and friends to visit on our 2 week trip, and every bloody one of 'em only had root beer to offer a poor, 13 year old Piley. It was rank! Tasting like a cross between TCP, disinfectant and germoline.... How come nobody had any other soft drinks to offer me??! Maybe 1980 was the big Pepsi and Coke drought year in the US? Or was root beer just trendy around that time? (Heff?? help me out here!!). Anyway, on return, I realised I'd gotten t 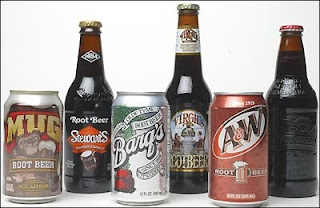 he taste for the stuff, and found myself craving another sip... I've been addicted to the stuff ever since! In the 80's, the only place you could find it in England was in McDonald's, so I got my regular fix there... and to be fair, the root beer was the smart choice anyway, as this was around the time when McDonald's didn't sell branded soft drinks. When you asked for a Coke they always replied "is McDonald's cola OK for you?" If you are too young to remember this, lemme tell ya, McDonald's cola was NOT alright for you!! Think poor quality Happy Shopper\Panda Pops!

The 90's were barren years, and I don't think I found a drop of the stuff in these Isles for a decade. In recent times Sainburys have started selling 2 litre bottles of the stuff, and Asda have started selling a 6 pack of cans. Both are branded 'Carters' (who??!), and whilst not wanting to sound churlish, it's not the best. Imagine craving Pepsi for ten years, only to finally find a bottle of that McDonald's cola?!

Weirdly, when I returned to the US in early 2000, Root Beer seemed to be out of favour once more, and cola was again the drink of choice. Again, Heff, I'm counting on you to help me out here!?


HAM FLAVOURED MINI-CHEDDARS-
I didn't dream these did I?? They really did exist right??! All you can find these days are the standard cheesy fellas, which don't hit the spot for me at all. I've been given many false alarms on the ham variation in the last few years, most recently by a pal who SWORE they sold them in the bar of the football club he plays for. A job lot was promised, but it was yet more false hope... Last Christmas, McVities announced they were releasing a 6 pack including limited edition flavours. I was convinced that the ham was comin' home... but what did they release? Cheese & Onion flavour and Extra mature cheddar flavour!! Bloody hell McVities! Think outside the box a bit eh??!

CHEESE POPCORN-
Yup, I know it sounds vile, but believe me, it's the food of the gods! Popcorn, coated in a powdery cheese heaven! Surprise surprise, another American invention, but boy am I hooked on it. Ag 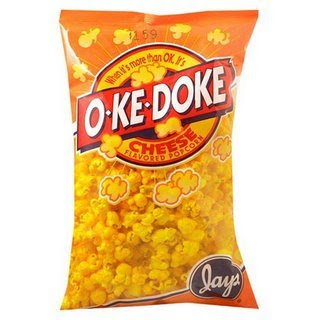 ain, it's been tried in England a few times over the years, but always disappears from the racks after a few months (and disastrous sales). Recently I discovered a popcorn specialist in Lakeside shopping centre, with over 20 different flavours of the stuff (including BBQ, Cheese and Onion and Beef!!)... It was a real treat to get my hands on the cheese flavour once again, and made a trip to this hell-hole almost worthwhile... but on a return trip they too had succumbed to the curse of the cheese popcorn, and had promptly gone bust!

I'm obsessed by all three of these items, and every time I go to a newsagent or supermarket (and I mean EVERY time!) I always have to peruse the soft drinks and crisps\snacks sections, just in case any of them have been reintroduced to the British snacker! But my searches do occasionally pay dividends, and whilst on my pop corn hunt last week, I found something equally as odd in a sidestreet newsagent.... microwave Chilli Popcorn! Of course I bought it immediately, fully expecting to try one mouthful and throw it in the bin.... but guess what? Forget garlic bread, Chilli Popcorn is the future!

Oh and whilst on the subject of popcorn, check out this video, which has scared the shit out of me. If this is what a mobile phone does to popcorn, can you imagine what it's doing to your brain???

I'm bloggin off for a few days, and I'll see you back here in a week or so... but in the meantime, do please let me know what snacks you are continually searching for... and if by chance there are any UK sightings of root beer, ham mini-Cheddars or cheese popcorn, be sure to let me know!

With you all the way on root beer P - love it and wasn't grape a big flavour out there too?? (PS you can stock up on an Aussie brand of root beer - at Costcutter in Leigh Road, or Waitrose)

Ham Flavoured MC's - rings a bell - how about 'egg and bacon Frazzles' they lasted about a fortnight..

Or 'Savoury Puffs' crisps you could only ever buy at the bakers...

Root beer... oh no just the thought makes me want to chunder!

Ham Flavoured Mini Cheeders - I'm with you they were out there, we need to write to our MPs instantly....

I don't recall a time when all you could get in America was root beer. I think someone played a horrible joke on you, lol.

Dude, that Cellphone popcorn was AMAZING !

I'm 42 and i've never tried root beer. Just the title puts me off. All i crave are either Twiglets or Pretzels. Both kick ass and both are widely available. Like heroin they are both morish :-). (not that i'm into smack y'understand !!!).

My squeeze got really hooked on McDonald's root beer for a while in the late 80s, and would guzzle a huge one every evening on his way home. After a few weeks, he was stricken with what his GP described to him as 'paralysis of the bowel'. He hasn't drunk it since...

Root Beer taste always reminds me of a visit to the Dentist, never been that fond of it as a thirst quencher with that in mind.

The one simple thing I would like to see is the return of family sized bags of ready salted, cheese n onion and salt n vinegar crisps ! All you can get seems to be multi bags or the latest concotion in the Walkers mixed chemical range !

Sometimes all I crave on hot summers night is a cold coke and a bowl of ready salted .... easily pleased these days Piley !

can't say I've ever tried root beer. For some bizarre reason the name on it's own is enough to put me off. Don't really have any memories of ham mini cheddars but I think I'd prefer them to the cheesy popcorn. The chilli popcorn sounds worht a try though, I think we've got enough mobile phones in the house to do it.

Ahh yes, the great Cola drought of '80, I remember it well, LOL. Seriously though, Root Beer is actually pretty tasty, some better than others, once in a while.

Hey all, just back from a week away, thanks for your comments...

PM - I've tried that Aussie brew, but find it doesn't hit the spot at all, nowhere near 'rooty' enough for my tastes! Don't remember the Egg and Bacon frazzles or the bakery puffs...

Furtheron - with all the revelations in the press the last few days about our dear, dear MPs, i'm sure they would be delighted to change the subject and back the 'Bring back ham mini-cheds' campaign!

Heff - Hmmm, think I musta been swizzed then, or maybe it was the only way these people could get rid of that shit?! I bet they were all holding back on the good stuff..

Carl - we are changing that before you get to 43!! A drop from Piley's secret stash will head your way before the end of the year fa'sure!

ISBW - ugh, how reassuring! I'm not into a daily glug tho, so hope my bowel can cope!


EF - yeah, a trip to the dentist captures it pretty accurately too! You are so right about crisps... there's a separate post in there on its own. Everyone is so obsessed with these mad flavours, that the good ol original flavours get forgotten. And yeah, what did happen to those big ol bags of walkers or Smiths crisps? Good call!

Anon - make yaself known, and you too will receive a sip from my personal collection... I'm too kind, i know i know... I can point you in the right direction for chilli popcorn if you are tempted..

Wil - thanks for stopping by. I think you are right, it's not like 'lemonade' or 'cherryade' etc etc, where pretty much there is one flavour no matter which brand you buy. Root Beer is much like the 'cola' wars, for me only Pepsi hits the spot, but will drink Coke if it's all that's on offer... other than that NOTHING else will do.. Virgin cola anyone??? ugh..

I love Root Beer- but then again, I grew up with the stuff. In the old west, it was known as sasparilla!

You must try Dr. Brown's Cel-Ray ... it's Celery Soda...mmmmmmm
http://en.wikipedia.org/wiki/Cel-Ray

Cheese popcorn, on the other hand, is truly vile.