I've mentioned before how I can sometimes feel a little despondent about new music... But when I do hit on something special, it still gives me an incredible buzz. A couple of years back the 'ol Spidey sense was tingling like a full-on earth tremor when I discovered Dennis Hopper Choppers. 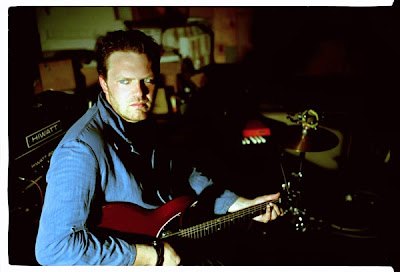 DHC is actually a one-man-band, Ben Nicholls. But don't go imagining that sad 'ol fella who you once saw playing under the railway bridge, cymbals attached to his knees with string, a drum operated by a rather odd, sidways leg-action and a kazoo sticking out the side of his mouth... this is the coolest one man band you'll ever see. Incredibly, Ben plays guitar, bass drum, high hat, organ bass pedals and 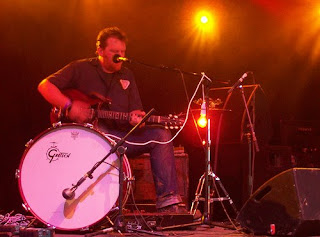 vox-organ... oh, and he has a pretty damn fine voice too! And if you are in any way doubting how this could possibly work, I urge you to go see him live! You've never seen one man make such an incredible noise on his own!

I was genuinely blown away with the debut album (Chop) in late 2007, which has remained in or nearby the CD player pretty much since its release. reverb soaked rockabilly twang, mixed with everything from Nick Cave, Elvis, Johnny Cash, Scott Walker (the track Don't Run From Me could be a lost Scott Walker classic!), The Cramps and Dick Dale. For me, listening to the album conjours up images from films like From Dusk Til Dawn, El Mariachi, Desperado Etc etc...

I am really chuffed to say than Ben has been kind enough to answer my '19 Questions', so Ben, it's over to you....


1. How are you?
I've got a cold at the moment, which is really annoying cause I need to get the vocals finished on the new album and I don't wanna sound like Dylan after a heavy night....

2. Where are you at the moment?
At home, being quiet.

3. Who inspired you as a child?
My dad had a big record collection that included a lot of Buddy Holly, Elvis, Leadbelly, Big Bill Broonzy and Johnny Cash. You don't know any better as a kid, so that's just how I thought music was. It takes quite a few years to realize the effect it's had upon you, all that early listening.

4. What was the first record you ever bought?
Well the first record I remember getting hold of was a cassette from a friend at school. On one side was Bob Dylan-The times they are a-changin’, and the other side was Joni Mitchell- Hejira. It made me realize that there was more to music than I’d thought.

5. What's your all time favourite song(s) or album(s)?
True Love Ways by Buddy Holly. It's such a beautiful song and his vocal is amazing. The arrangement is obviously a big studio production, but you just can't remove the rough rockabilly twang from his voice.

6. What was the first gig you ever attended?
The first gig I ever went to was actually a free festival in about 1978. I was a tiny kid and my dad took me and the dog for a walk on the south downs near where I'm from. We stumbled into this festival on a hilltop. All I can remember is the 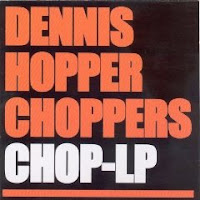 7. What was your 'biggest break' or 'luckiest moment' in establishing your career?
I’m not sure it’s about luck. It’s about working out what you do and then just getting on with it and hoping the world catches on.

9. What's your most 'Rock n Roll' moment?
Still being a musician despite the local muso who told me after hearing me play at the age of 13, not to give up my day job.

10. Worst moment of your career?
Every time I get home after a four hour drive from a gig and have to unload an entire bands worth of gear on my own at 5 in the morning. Ug, the downside of being a one-man-band.

11. What are you most proud of?
Not losing the faith, against the odds.

12. One bit of advice you'd like to be able to give the 17 year old you?
Be confident, everyone else is making it up as they go too.

13. If you could perform with any artist (dead or alive), who would it be?
I’d like to have a band with Link Wray on guitar and Steven Drozd of the Flaming Lips on drums. Massively heavy yet slinky at the same time.

14. Name one artist you really think I should check out?
A singer songwriter from devon, called Dan Goddard, he has one album out just called DBG. It’s kind of a cross between CSNY and the dark side of Roger Waters, but the melodies are incredible. It needs to be checked out.

(You can check out Dan's MySpace page here.)

15. What's currently on your iPod..CD player?
Link Wray- Three Track Shack. It’s an amazing compilation of music made despite the music business, which he’d fallen out of line with. It’s got everything in it.

17. Which song do you enjoy performing the most?
All of em, all depends when, where and to whom......

18. What are you working on at the moment?
I’m working on a new album at the moment with Ben Hillier of Depeche Mode/Blur producing fame at the helm. It’s going well, much bigger sound than the last record and more people playing on it. We’ve cut most of it pretty much live with an 8 or 9 piece band with no separation and lots of mics up in the room. It’s gonna be a great big swamp of a record….

19. How can people find out more about you?
Website - www.dennishopperchoppers.com or MySpace. The new album should hopefully be out in a few months time and there’ll be more gigs coming up later in the year.


If you want to hear more of the debut Dennis Hopper Choppers album 'Chop', you can hear a clip from each track here.

And if you want to buy 'Chop', you can get it on Amazon here.

Finally, here is the video for the single Little Johnny:

I always thought Ben was 6'8" tall, until I met Seth at the signing tent at the Cambridge Folk Festival and realised he was about 5'3".

Hi Rob. Yeah Ben is one busy guy... he's the former bassist of Menlo Park and The Silver Jets, and has also had stints with Ralfe Band, Big Sur, Cara Dillon, and as you rightly point out Seth Lakeman. Pheww!

Saw him live at Rough Trade a couple of years ago P, - it's unreal and hypnotic watching him live - Chop (and The Wolfmen's 'Modernity' album from the same time) are still a couple of albums on my 'most played' list

interesting interview, not heard of ben or dennis hopper chopper before - what a name! (wish question 20 was how the hell did you get that name!)

the video was really enjoyable, and the sound incredible. will be sure to investigate his work further. great recommendation, thanks.

PM - You are right about 'Chop'... Sometimes I get into an album, then after a while I find it's starting to irritate me, but Chop just gets better and better doesn't it? The sign of a quality album.

Hi Anon - glad the article interested you - Check out the DHC myspace page to hear more tunes, or take the plunge on the album, you wont regret it!

Starbender - thanks for stopping by. Looks like there will be some shows to go with the new album, so hope you can catch DHC then.

It sounds like something from a Tarantino movie, LOL. Not exactly my cup of tea but it was worth the listen.

At least he's not gonna suffer from the ol' 'musical diffrences' bit that most bands go through. Yet another thing to add to the 'must check out list'. You'll have to slow down a bit, I can't keep up.

With you all the wa..... nah jus kidding P :-), Really clever to play it all on his jack. He must really be some thing to see in concert. Nothing new though sound wise , Link Wray guitar sound etc etc. Not been blown away by some thing new for age's, shame :-( here's hopin'.

I like the look of him. I'll be keeping my radar pointed in his direction. Thanks, P.

PS. If you haven't already checked out home-grown garage sleasters The Flaming Stars, you might care for them. Start with 'Bring Me The Rest of Alfredo Garcia'. Well worth catching live, but only seem to play Stoke Newington and Germany these days.

Will - you can't win em all mate... thanks for having a listen tho!

Anon - I guess that's one way of looking at it! Although lumpin that gear around in the early hours of the morning did sound like a distinct disadvantage! Glad you like it anyway.


Carl - Although i know the name, I don't think i've heard Link Wray, so DHC was a genuine breath of fresh air for me. You are right about live tho - you should try and check him out sometime.


Ishould - Cool, glad it hit the spot for you! Thanks also for the tip, have been over to The Flaming Stars myspace page already and I like it! Listening to them RIGHT NOW as I type this!

Bands will get there names from ANYWHERE these days, won't they ?

Oh well, they can't ALL be named Butlik, now can they ?

This kicks ass! A great find and the best new band ive heard in a long while. Love the 1manband idea, love the video and love the sound.

Am off to pricerunner right now to see where I can get it the cheapest!!

Just in case any one else want to know, I just done some research and found www.101cd.com to be the best price 8.79. Mine is on the way!

Really enjoyed the Q and A, it was great that Dennis took time to answer the questions, and wasnt just all 1 word answers. Also thanks for the tip (and link piley) about DG someone else with a great sound, i'll be checking the album out.

What a great sound from one Man, great answers very informative, also its nice to get a tip about other artists from someone in the biz, that i probably wouldn't have ever picked up on.