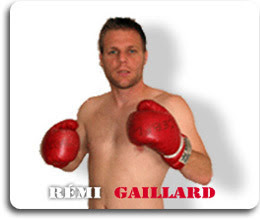 Someone tipped me off about him a few weeks ago, so I started searching for his videos, and you've got to admire his nerve. He first came to the attention of the public in 2002 when, incredibly, he donned the kit of FC Lorient, and somehow managed to 'mingle in' with the players at the end of Coupe de France final (kinda like our FA Cup Final). Not only did he join in with all the celebrations and laps of honour with the winning team, he even got introduced to president Jacques Chirac! There have 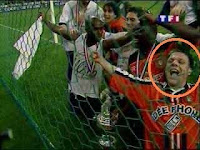 been other sporting pranks too, with him somehow managing to get on the field of play at rugby games, tennis matches, volleyball tournaments and more... all filmed by his mates on hand-held video cameras.
Two of his stunts that particularly crack me up are his 'Mario Kart' and 'Pac-Man' recreations!! This guy has a serious screw lose! Dressed as Mario from the famous computer games, he sets off round the busy streets of some French suburb in a tiny go-cart - much like you'd see at the seaside (and JUST like you'd find in the computer game!). Weaving in an out of the unsuspecting traffic, Remi faithfully recreates the idea of the game, ever throwing banana skins at some of the drivers as you do in the game!
On the face of it, his Pac-Man recreation is particularly juvenile. But when you look at the effort that has gone into this prank you do have to tip your hat to him. Remi, dressed as Pac Man, charges through shopping malls, golf courses and more... chased by 3 life sized ghosts!! It's the attention to detail I love though, watch carefully as he tried to pick up a golfers ball, and a pool players cue-ball.... what's he up to? Well remember how Pac-Man could chase the ghosts if he ate the white 'power pill' sitting in each corner??! Genius!
Kangaroo Rampage, is another seriously childish one, but I defy you not you laugh, as he 'hops' round town causing absolute mayhem.
Here are a few videos of the man in action, but if you are keen, you'll find many more on YouTube!
Remi Kart


actual TV footage of that Coupe de France final ... you won't believe what he gets away with in it!

Love his Rocky vid as well, around about 2 minutes in, excellent.

The Pac-Man clip kinda reminded me of the Jackass clip where the fat guy in a diaper is chasing down a midget also wearing a diaper on a main road in a town.

Bystanders just stare, like, "What in the fuck is going on here ?!? "

Def some funny shite there.

genius indeed.. the football one is stunning

LOVE the footie one!

Kangaroo one had me crying with laughter. Thanks.

Fantastic, loved the Pac-Man. God Piley I spent so much money on Pac-Man!

Do you remember those coffee table versions they had in pubs? I'd pay hard cash for one of those now!

Still with my upcoming fortune I'll be able to buy one and the pub to put it in. Good times!

Ha! Excellent, The Cup Final japes are very impressive! I reckon I could get away with a similar caper if I wasn't the wrong side of 15 stone. An English guy did something similar a few years back with Man Utd in a Champions League match.

Anon - yes, another winner! I could have ended up posting the lot!

Heff - Agreed, VERY Jackass, but the 'pacman' slant was a winner!

Further/Ishould - The football footage is something else eh?? Got to admire the sheer cheek of it, and the balls to actually go do it.

OP - I do indeed remember those table-top machines! A few space invader ones as well wasn't there? I remember them appearing in some more 'sophisticated' pubs! What was the thinking behind that?!! Standing up playing the game in a corner somewhere is SO uncouth, but sitting on a sofa playing it is to be encouraged! Bet they go for a pretty penny now though.

John - good to hear from you mate. Now you mention it, I think I do remember that... is there any footage about I wonder?

Adrian - thanks for dropping by, I always appreciate comments... although I'm not crazy about the tone of yours. You obvioulsy didn't READ my article, so let me help you.....

1. "how dare you to compare him with Johnny Knoxville" - You need to understand that people reading my blog are likely to have never heard of Remi. You have heard of him... well done, I'm very pleased for you - others havn't. Therefore you need to be able to explain the type of character he is. Like it or not, Johnny Knoxville is the closest person going that people will have heard of. Get over it. Who should I compare him to... Charlie Chaplin??

2. "how dare you to say his not big, and how dare you to say he is not clever" - erm, it's actually pretty childish stuff when you boil it down. But I happen to like stuff like that. But subtle it aint... oh and by the way.. this is MY blog, and I tend to say what I think, I don't recall blogger informing me to check it with you first ;-)

3. - "he IS BIGGER THAN ANYONE I'VE KNOWN, bigger than johnny Knoxville cause he doesn't get paid" - Is Remi the only person you know then?? When I last looked there was at least 10 people in this world bigger than Remi, but i've not checked lately, maybe he is the ruler of the universe these days. Oh and since when did being paid (or not) decide how 'big' you are? Just because you know of Remi (and nobody else!), you need to take a step back and realise that a lot of others don't....

4. "he doesn't do it for money he do it because HE IS A GENIUS! and so he IS clever!" - Well good for him! I hope he does well living on all that free air! Yes he's very good... that's why I did an article on him y'see... I like him too. My article was a positive one, praising his work, not a negative one, you obviouisly didn't get that (or read it...) As for "You really don't know ANYTHING" i'll leave it to my readers to decide on who deserves that particular title.

Good luck to you my friend.