Don't worry, I'll not be bothering you with photos of the family or the Dorset countryside, just a few oddities I spotted whilst out and about last week.... 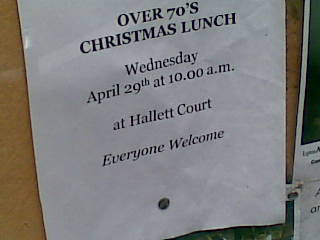 How nice are the people of Lyme Regis??! No doubt concerned that some of their OAPs maybe won't make it till December, they were having their over 70's Christmas meal in April!! As if that wasn't kind hearted enough, everyone was welcome!! More like an under AND over 70's bash really! Love the fact it was starting at 10am too! There's nothing like Sage and Onion stuffing for a mid-morning snack eh??! 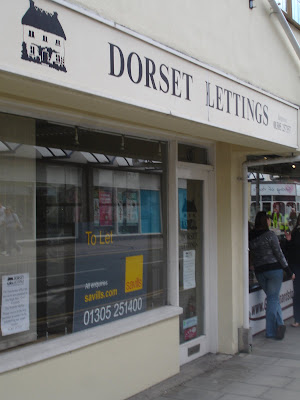 I was delighted to see that the Dorset Letting Agency in Dorchester was, well... "To Let". A shop that really does what it promises eh?! 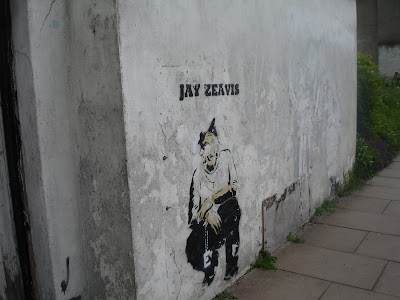 Spotted this on a wall during our day trip to Glastonbury, just before you get to the entrance for Glastonbury Tor. It looks a little worn, and could easily be a year old, harking back to the big 'Jay Z for Glastonbury Festival' debate. Not sure if it's a genuine Banksy, it does look like one, and he has certainly done a few pieces in the town in previous years. 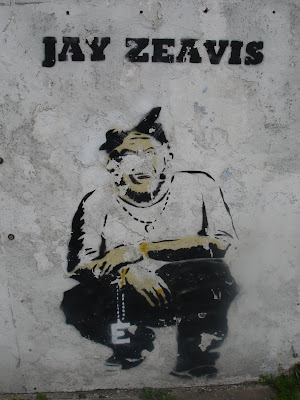 Wot no pic's if Moore's Dorset Knobs?? D'you reckon that name was inspired by the Cerne Abbas giant..

When me and Mrs PM we decided to get engaged we did it on our first trip to Glastonbury, being old mates for years before we got together - were always saying 'who'd've thought it '..

What was the first pub we saw after buying the ring? 'The who'd've thought it '

my dear boy there is a word missing....

That's brilliant. Life moves at its own pace, where the roads are bad. If we all pitch up there tomorrow morning we'll probably catch the Queen's speech.

I love that over 70s Christmas meal pic. It's a pity you couldn't stick around and pop in - it might have been the ideal opportunity to try some eggnog.

Dude, these are great! Great eye for natural comedy Piley!

Col/Axe I no longer know who I am said...

PM - on the day we arrived there were signs all round a nearby town pointing to "DORSET KNOB THROWING"!! What a welcome! Was keen to take a picture, but we were a bit lost and a bit stressed at the time, went out the next day and they had all been taken down.

Further - yeah coulda been i s'pose, might explain why I saw Noddy Holder and Roy Wood in town too eh??!

ISBW - The pace of life in Lyme Regis is wonderful! It really is like a throwback to the 70's (Hey Further really was on to somethin wasn't he??!). I reckon if we did catch up with the queen, she'd be in black and white!

Cocktails - Hmmm, and isn't Egg-Nog a bit 70's too??! That Furtheron dude is a prophet i tell thee!