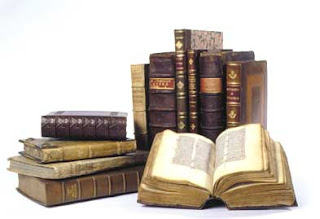 The English language is forever changing. Words go out of fashion, words change their meaning, new words are invented, slang comes in and out, and words sometimes, without warning, change their spelling... How do you spell 'Yoghurt' for example? well, like I just did of course.... but next time you are in the supermarket, check the pots on display, and they are almost all now spelt 'Yogurt'. Even the food industry is dictating how we spell stuff!
Then there are 'buzz words'. Working in an office, I know ALL about these.. one day, I'll take a 'helicopter view' of the situation, 'think outside the box' 'pick some low hanging fruit', and do a post on it... just to ensure you are all 'on the front foot'. I mean, 'at the end of the day', 'it's not rocket science' so I should be able to do it for you.... It'll be a 'win-win situation' I'm sure. But he

y, that's not what this post is all about, so I'll "put that on the back-burner' for now if that's OK.
And how about words that become fashionable and\or over used... "whatever" "basically" "like" (as in "and he said lets go, and I'm like, no way" Grrr) etc etc. But if there is one word that is noticeably getting overused at the moment it must be 'iconic'. It's a great word (or was), and used sparingly was wonderful for describing a truly legendary image or building ('that' picture of Che Guevara, Big Ben\House of Parliament for example). Now it's been dumbed down to be used to describe a picture taken out clubbing posted on Facebook, a moment of reality TV, or the new Chippy that opened round the corner. You just can't get away from it. Here's just 3 examples that have annoyed me in the last week:
1. On one single episode of the X Factor last week, HALF of the evenings performances and\or songs were described as 'iconic' by the judges (I'm sure they must of been, but I've forgotten them all already!);
2. I heard a feature on the radio about the rejuvenation of an area on the outskirts of London. Lots of buildings were being demolished, but in their place will be an 'iconic' building. Bloody hell, the thing isn't even built yet, but it's already iconic!
3. The final straw (and I swear this is true), was listening to 5Live early last weekend, and heard that later in the show they would be talking to "iconic agony aunt Deidre Sanders, from the Sun's Dear Deidre column"!! Are you SURE she's iconic??! If you fell over her in the high street, would any of us know who she was?? In fact, I've just done a Google picture search, and I thought it was Delia Smith.... the legendary icon of the cooking world. 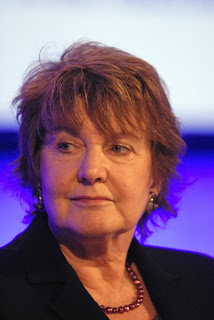 the icon that IS Deidre Sanders, gets ready to knock up an iconic Key Lime Pie...
Piley

Great to see that you're still passionate about blogging Piley. Iconic post - you really nailed it, yes, you made the subject your own :)

Couldn't agree more, the whole English Language is slowly being dumbed down and this is a very good example.


Like you I am pretty clear on what an 'icon' or 'iconic' picture is and Dear Deirdrie or anything associated with Shite Factor do not fit the bill!

You got me thinking of Iconic pictures now so I will throw in the one of the US Marines raising the flag over Iwo Jima and the whole sad story associated with that picture.

'Pick some low hanging fruit', well that's a new one for me. I agree with you Ian, certain words are slowly losing their meaning, personally I think text messaging is a real blow to our language. Since people are actually starting to talk in txt message fashion. First people stopped reading, then they abbreviate everything, now they stop talking. The more technology brings us together, the further apart we become. M8.
I don't even own a mobile phone, but I'm the only person I know who doesn't. Still I guess the flip side of it is that we wouldn't be in touch with each other if not for Facebook. Lol.

EF - Great example Sir. I'll give a few more in exchange... that awful Vietnam\Napalm photo, how about 'that' shot of Monroe in the white dress? Bowie in a phone-box on the cover of Ziggy?? And lots more besides. Hold on, a new iconic image just coming through from BBC news.... yes it's gillian mckeith fainting (forget the previous ones).

Gary - Spot on with the text speak, I'm sure things are getting worse much faster because of that. I can't believe that some kids actually TALK in text speak now. I've heard more than one person say "oh hahaha LOLLL" when hearing something funny. I'm not a violent man Gary, but I had to stop myself from butchering them on the spot...

Top post Piley. Although annoying, it's not so much the "in" words such as "like" or "whatever" that concern me (having been guilty of similar things when I was a kid), or even the awful Aussie inflection that happily is on the decline; its the misuse of words that gets to me most. I know that language has to evolve, but its use now mainly undervalues what some words are meant for in order to sensationalise. "Awesome" is hardly how I would describe most of the things its used for nowadays (unless its used to describe that mad woman in Get Me Out Of Here).

Hurrah - just checked my blog for 'iconic' - Nul points, a clean sheet. Checked for icon and only 3 appearances once for Elvis, once for Stan Lee (fair enough)the other as 'with a Japanese flag (which became something of a style icon for several months) '

I don't think I've EVER used the term "iconic" on HBAG, so we shouldn't have any problems with each other, eh ?

Anon/warble - agreed, it's the dumbing down of words that gets to me most (as in icon/iconic). I would say the mad woman is more 'wicked' or perhaps 'amazing'... Although Linford id indeed awesome!

Mondo/Heff - we can indeed remain friends! although Heff, you are iconic!

'Random' seems to have had its day, which I'm pleased about, but 'wicked' (as in 'wicked sense of humour' usually indicating someone with no discernible wit whatsoever) continues to irk me.

However, one of the most unpleasant expressions I've observed recently is 'shit the bed', uttered to indicate incredulity, and 'she'd get it', used to denote sexual attraction. Noel Coward 'must be revolving in his grave'.

The other word which is greatly over-used these days is 'Genius' - anyone, including derivative pop singers, footballers, film stars , TV celebs, even chefs etc are given this accolade far too often.

ISBW - agree on 'wicked' sense of humour! This is the equivalent of people in the 80's who'd say "I'm right mad me" or hang a stupid sign above their desk saying "you don't have to be mad to work here but it helps"... and then sat stony faced under it all week... sigh

Delighted to say I haven't come across either of those delights, although will be adding them to the collection immediately. Nigella Lawson eh?.... ;-)

DW - you are a genius!! Why didn't I think of that one?! (actually the answers obvious!).

Well, thank you very much ! Just keep your low hanging fruit away from my back-burner, LOL !!!

I have to say I mostly find such cliches pretty amusing, but there is something decidedly irritating about the increasingly inappropriate use of the word iconic.

And we're not alone in thinking this. The fabulous Jonathan Meades wrote an article about this very thing in Intelligent Life some time ago:

He's got some good additions too: legendary, worldclass and of course, as already pointed out, genius.

Always struggled a bit with the english language but definitely agree with you here. For some reason I always thought an icon was some sort of religious image. If people are starting to refer to the manafactured tripe we see on X factor then we really are in a bad way.

Just read my comment and I'm not sure if my problem is with the english language or pressing the send button before I've read what I've written. Last sentence should have said 'If people are starting to refer to the manafactured tripe we see on X factor using these terms, then we really are in a bad way'.

Cocktails - thanks, and thanks for the link too, what a good read. 'Legend' is another great spot too. Love that list of phrases he's seen using the word 'iconic' in, well worth a look just for that. Favourites would have to be; iconic comb, iconic flat cap and iconic crisps!Genius! (joke!).

Martin - I worked it out! and yes you are right, an Icon was\is a religious painting (often on wood) that go back as far as the 4th century. But then Wagner IS pretty good (sigh)

I blame the youth,they pick up on a word apply it to some thing and off you go. My son say's things are "sick" this does not mean bad or gross or being ill no it means "cool". That film was sick = that film was cool. Natch our X Factor wankers errr sorry presenters want to appear to be "down with the kids" and there we have it a nation talking like teenagers and applying the wrong words to the wrong things. SICK.

however to exemplify this reduction of the superlative I point you to the Gallup 12 - a series of questions used by thousands of corporations around the world to determine the engagement of their workforce...

Carl - agreed. I'm sure we all had our own 'hip' sayings in our day, but I can't help but feel things seem to be changing quicker than ever. Like Gary says, I'm sure mobiles\text speak has had a lot to do with it.

Heff - just one more turkey to go, and then i'll be right with you Sir!