The Strange Case of Charlie Chaplin and the Mobile Phone 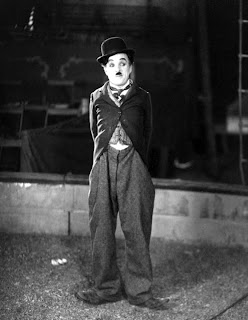 Pretty much all my life I have been a fan of the silent films and early talkies of the true comedy greats... Laurel and Hardy, Harold Lloyd, Buster Keaton etc etc. I can even go a bit of Charley Chase and the Keystone Cops... Yet arguably the most revered silent comedian of all leaves me completely cold. But I'm not alone, and I struggle to find anyone who actually admits to enjoying his films (yet Stan and Ollie and the others are always mentioned as favourites).

I'm sure it's me who is wrong. He was obviously a comedy genius, but I just don't get it, and have always found his work cold and emotionless (and largely unfunny)... never have I felt any warmth or affection for his 'little tramp' character. Having said all that, I do still own a few of his films, bought back in the early 2000's when they were re-packaged and re-released, in a last ditch attempt to convince myself that he must be brilliant (it didn't work).

But in the last few days I've been watching the extras of a Chaplin film with more interest than I've ever shown any footage relating to the man. It all kicked off last week when eagle-eyed film fan George Clark was running through the bonus features of his Chaplin box set. There, in amongst the many extras for the film 'The Circus 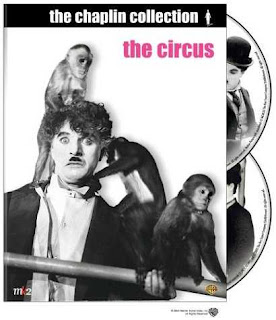 ', was some footage of the premiere, held at Manns Chinese Theatre in Hollywood. As the camera pans the streets to pick up the atmosphere of the day, into shot walks a portly woman, who for all the world seems to be talking on a mobile phone!!! in 1928!!!

Of course the media have immediately jumped to the only sensible conclusion and declared that the film must have captured a time traveller!!!! (not like them to sensationalise a story is it??!). But it has to be said, it is an odd bit of footage, that I find a little un-nerving to watch (especially in the clips now available when the woman in question has been 'zoomed in' and slowed down). Her mannerisms are completely consistent with those you see every minute of the day whilst walking down the road, and the 'grip' she has on the object is just like that of someone holding a mobile. Oh, and she is definitely talking into it too. The Walkie-Talkie wasn't invented until the 1940s, and transistor radios weren't around until the 1950s, so I have no idea what she could be talking into. Perhaps she was a bit cranky and just talking to herself? Perhaps she was holding the side of her face due to toothache and moving her jaw in pain? I don't know... I guess it's most likely she was a time traveler!

Anyway, have a look for yourself.

Here's the YouTube video that George Clark has posted about his find:


Here is the 'extras' footage from the DVD of the film premiere, held at Manns Chinese Theatre in Hollywood. The woman walks by 20 seconds in.


This video concentrates solely on the clip of the woman, replaying it over and over again, whilst zooming in and slowing the footage down (this is the one I find a little creepy!)

At first Piley, I thought it was Patrick Troughton. But I'm wrong, it is definitely Tom Baker. Deffo.

But what a strange thing. I wonder what was really happening?

Radio mikes were not invented until the 40s so it's not one of those. The only 'audio' device I can think of would be the microphone end of a wire recorder.

But whether or not there was such a thing as a 'portable' dictation style wire recorder around in 1928 I do not know - and if there was, what was going on - on-location reporting?

I don't find Chaplin funny either. Nor does my Dad (who is 78) so it's not a recent thing. But his parents thought CC was hilarious, perhaps as they were of the same generation? I do find Chaplin clever and interesting though - very prescient; maybe he was the time traveller...

It's the option I prefer - unless Chaplin himself set up the whole thing as a kind of joke for the future. You know, re-filmed in 1972, assisted by Walt Disney, Howard Hughes, Gene Roddenberry, Special Guest - Martin Bormann.
So hard to tell real from Memorex these days.

I'm with you on Charles. He leaves me totally straight faced.
As for the mobile phone. I see a woman holding her hand to her head, moving her lips and a man making the sort of logic leap that has filled the ether with tales of UFOs, alien abductions and life after death for decades.

We want to believe...

Funnily enough I was looking at this last week, via a science site - the conclusion was the device is an early hearing aid (which were shaped like mobile phones). Another point was made - if it is a mobile, there would need to be some network provider in place for coverage.

I'll post the link if I can find it

As for Chaplin me neither, but having said that, a few years back we were at the Royal Festival Hall, wandering about the place, and noticed a growing group of passers by had collected outside the gift shop guffawing away. It turned out to be a Chaplin vid' (the one where he's trapped in a large printing press) showing on the in-store TV. He suddenly made more sense seen as a communal viewing experience , also it's the only time I've seen this style of mass random view-in.

But Harold Lloyd will always be the kiddie for me - we watched Dr Jack for Halloween, the kids love it.

OP - Tom Baker!!! Well she has the hat anyway!! It's an odd thing isn't it? I'm sure there is a simple explanation, but chances are we'll never quite know.

Funny enough (or perhaps that should be 'not funny enough), My dad (also 78) can't stand him either, yet it has he who brought me up on Laurel and Hardy etc.

VS - Yeah I'd go along with that.. although I assume the 'man' you are referring to is George Clark and not me??!! I don't know what the answer is, but am happy to discount 'time traveller' as the answer!

Mondo - be interested to see the link, ta. Yeah a hearing aid is another possible answer that I've seen too, although I understand that in this period, there were more 'ear trumpet' in design than anything vaguely box-shaped. Even if it is a hearing aid, it still doesn't answer the fact that she seems to be talking, and is not walking with anyone. Maybe my idea that she was just a bit crackers (and deaf) is the best one?!

Dr Jack!! what an absolute classic!! I bought that HL box set on the day it came out, and slowly worked through the whole thing. Quite a few films I'd never seen before, but just about every one was brilliant. Came away respecting the man even more than I already did.

I always thought time travellers would have smaller plates. If you read his/her lips you'll see that the conversation is of the ' you'll never guess who I've just seen' variety.

Here's another Time Traveller for you!

Ha! Yes, I did mean Mr Clark, who seems to have ignored any possible logical explanations, and headed straight for the fantastic.
In search of publicity perhaps?

Strange bit of footage that. Time travel though, people do want to believe everything don't they? I like the hearing aid idea, sounds faintly plausible.
As for Chappers (as I'm sure no one called him), I don't find him laugh out loud funny in the way I do Stan Laurel, Buster Keaton or Harold Lloyd, but his real contribution lies in the fact that he was an independent producer, director, writer and star at a time when that had never happened. I do find his films moving, and certain sequences are able to raise a smile even if they don't have me clutching my sides. City lights and The Great Dictator are stone cold classics. But for laughs give me Sid James & Charlie Hawtrey every time.

Argh, she's not holding anything. She's just a mad woman with an ear ache talking to herself - probably about how she can't understand the popularity of this Chaplin chap.

JM I think you've nailed it! It looks to me like the final words are "see ya later geez". Love the other time traveller too... can't get away from the buggers can you??

VS - I know, lovely isn't it?! But you are right, had he gone out and said Look at this lady who most probably has a primitive hearing aid, none of us would have even heard the story.

Gary - think you are right, I'd have no qualms in labelling Chaplin 'clever'.. an 'innovator' even, it's just the word 'funny' rarely comes to mind. The Great Dictator is indeed one of the more accessible films (if only because you can get away from that bloomin 'tramp' caper for a bit!), but again, clever more than funny.

I think it's a message from the Time Lords, who are actually real. They are telling us that the Masters of the Universe think a creepy little bloke with a psycho smile pretending to fall over and eat his own shoes is the very highest form of humour.

So I suppose I'm just not very evolved, cos I can't stand the geezer.

and one day, damn dirty apes will rule the world.

Ahhh I wish you logical types would stop talking sense and leave me to my imagination :-)

Like several people here I was never a big Chaplin fan although I can't say I ever investigated that type of thing too much. Buster Keaton, Harold Lloyd and the Keystone Kops are the names that spring to mind for me. The big silent movie winner for me was Mel Brooks' Silent Movie. Couldn't help sitting in the pictures laughing at the absurd (stupid?) it was to pay good money to see a silent movie in the 70s