Now he is Three! 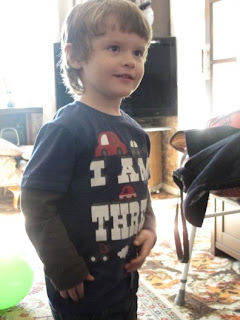 I remember when I blogged his second birthday, and was amazed at the advances he had made in the previous 12 months. But it seems even more so this time. Even at 2, he was still very much a baby, but he really is a fully fledged little boy now, who loves climbing, playing on the swings, going down slides, having adventures with his ever faithful collection of toy cars and much much more.

But of course the biggest revelation since the last post is that I can have a wee chat with the lad now! And boy does he like to chat! He also likes to keep in good contact with friends and family via the phone (landline only I must stress!), although his conversations usually consist of "hello, are you alright? what you doin? see ya later, bub-bye". But it's thoughtful that he made the call none-the-less!

He's also a dab hand at the DVD player... Switches the TV on, switches the DVD player on, selects the disc he fancies, opens the tray, inserts disc and pushes it back in... "push buttons" is his final request to mum or dad to get the thing started! Here are some of his favourite films (with his request in brackets):

But don't go thinking you can slip in any old dud from the bottom of the pile... A Sharks Tale?, Bugs Life? or one of dads Banana Splits perhaps? "no want it". Kids eh?!

He's turning into a tall fella too (although those of you who know me, won't be too suprised to hear that!), and despite only turning 3 last week, is already donning the clobber of 4 and 5 year olds. 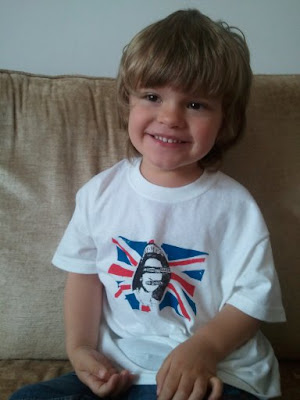 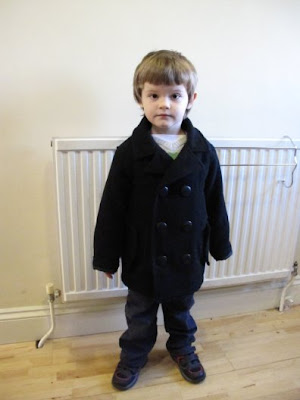 He remains a genuinely cheerful boy, with a great personality. He loves people and is always saying hello and waving at everyone he sees. Of course, this being Essex, his cheery hellos are more often than not ignored. Rotters.

The picture at the top was taken on his birthday, and the others over the last 2 or 3 months.

Happy birthday big "little" fella. Looking forward to seeing you in a couple of weeks. Wont be long before you're dragged along to some Sparks gig no doubt, so make the most of it.

Blimey that bottom pic he really is a pint-sized Piley (just needs an HMV or Ace Comics bag to complete the look)..

Have you tried him with Tom and Jerry?

Happy birthday to little Tom (or not so little perhaps). Any chance of him doing DVD reviews on your blog - could be a winner.

Suppose he's a still a tad young for Jaws? If he's anything like my lad it'll soon be time for The Snowman.

He's adorable! And don't worry about his response to the Banana Splits - I was terrified of them at his age (and I turned out all right, sort of).

Hope the little chap has the best birthday ever.

cheers Warble. you make it sound like the Sparks gig is a bad idea?? No signing him up to a season of Southend Utd away matches when you see him next!

ta Mond. Funny isn't it, coz I can't see it! I've got a coat much like that, will have to re-create the shot and compare! He don't mind a bit of Tom and Jerry, but not crazy on it (not yet anyway!)

JM - I fear Jaws will be a "no want it" at the mo. But when he's ready I'll be sure to pack him off to Uncle Medds for his inaugural viewing!

Thanks ISBW! He's not bad is he??! He likes the theme tune to Banana Splits but that's about it... must admit it does all look rather odd in the cold light of day.

Happy Birthday young Tom. He looks and sounds like a great little lad. Have you tried him with Blazing Saddles? That was always one of Sam's favourites around that age.

What a lovely post piley - Tom's DVD requests had me rolling up laughing and certainly brought back some memories! As far as Thomas the Tank Engine goes, I'm not exaggerating when I say that if ever I hear the theme tune I literally feel an overwhelming queasiness. This is because when my eldest was three, I was expecting his little bro and at the height of my morning sickness, he was the worlds biggest fan of Thomas the Tank. Thus it got played again..and again..and again.. whilst I sat there close to chucking up. Now that queasy feeling and that tank engine theme tune cannot be seperated! (I can feel the nausea coming on now - I'm not kidding!!)

Anyway, belated birthday wishes little Tom and keep up those 'hellos' when you're out 'n' about - never mind those Essex miseries!
x

Don't think he's quite up to the subtleties (!) of Blazing Saddles just yet Martin (could be another "no want it"), but I know I'd rather watch it that Shrek for the 89th time!

Thanks Mrs M - I know how you feel (well not quite but you know what I mean), there are some theme tunes that are already grating like mad, and with no end in sight!

Shrek is a firm favourite in this house, whenever we have a clear out the Shrek dvd's are clung onto for dear life (by me!)

Has he tried Up yet? a fantastic film...he could call it 'balloon man'.

Piley, blimey! the little feller has grown!!!
He's just beginning to look like a chip off the old block...but with Julie's good looks of course :)

A happy Birthday to Tom...and to you too, matey.

Belated Happy Birthday to the little fella mate, looking forward to seeing him over Christmas.

He's an absolute dude mate. The couple of time's i've met him he's been so chatty and funny too, he want's to join in on the jokes. Make the most of this time because time goes so fast. My boy is 13 now my daughter 10. It honestly does not seem like 5 mins i was bringing a small bundle in from the hospital. Life is so busy they grow up before you know it, i recently pined for them being small again as it just seemed to flow by, life is too hectic and busy and woooshh.

JJ - he is indeed a handsome wee chap. Some less modest than I would say he gets it from his father, but I couldn't comment ;-)

Grown is the word Dave - over 3ft 4 already! Yikes! Some less modest than I would say he gets it from his father, but.... Zzzzzz

Thanks EF - he'll be up for another tear up round yours i'm sure... keep the valuable crockery up high (erm, higher than 3ft 4!)

Carl - everyone is saying this to me, so there's gotta be something in it. Trying my very best to make the most of it, but bet I'm still left giving the same advice to the next man. I'm ashamed to say that I often go days without seeing him... I've left for work before he's up, and he's gone down again by the time I get home. That upsets me. Life would be so much nicer without work.

I can't work out how to comment without being anonymous. Dammed new phone. DMS

Argh, what a nice post. Happy belated birthday to him. Hope it was a good 'un (and get him on to Studio Ghibli's My Neighbour Totero quick!)

Cocktails - thank you! Yes, already have a few bits n bobs from Studio Ghibli kicking around, but will have to pick up My Neighbour Totero soon.... even if just to get a break from those bloody Shrek films, Argggh!