After 27 years of traveling the length and breadth of this country (literally!) to see Marc Almond, finally he has returned the favour and come to see me!! Just 3 or 4 miles down the road from Piley Towers, The Cliffs Pavilion in Westcliff staged the opening night of Marc's '30 years - Hits and A Sides' celebratory tour. 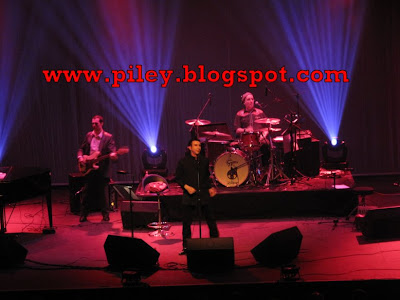 As I'm sure I've mentioned before, Marc has never been one to churn out the hits live. He might drop one or two in the set if you are lucky, but that's your lot. So apart from the '12 Years of Tears' celebrations back in the early 1990's, this is the first time he has thrown himself into a full on 'hits and singles' show.

I'd been feeling more and more nervous about this show the nearer it got. I've seen Marc play to a crowd that wasn't specifically his 'hardcore audience' a few times over the years, and just about every time have felt a little uncomfortable about the whole thing. I particularly remember one evening in Edinburgh where a drunken meathead attempted to assault Marc on stage during one of his intense torch songs. His beef? "I want fackin Tainted Love".
And this is problem. Marc is a genuinely credible artist, not a performing monkey. There is a lucrative 80s revival market out there, and it's one that Marc has consistently refused to tap in to, favouring instead to continue his career ('progressive' rather than 'regressive' I guess!). The clientele at these events are a long way from his die hard fans, and by and large assume all these acts are stuck in a time warp and have done bugger all since 1984. And they don't give a flying one about what you've been up to in the last 20 or 30 years at any rate... The 'revivalists' have no patience to sit through any other material, all they want is "fackin Tainted Love"..... But this tour has been promoted as an out and out celebration of Marc's more commercial success, so am guessing that a good percentage of the audience are likely to be in that 'revival' bracket. But if Soft Cell is all they know about Marc, how are they going to take to all the minor solo hits, that they may well be unaware of?
That was all a rather long winded way of saying that I was a little apprehensive about this show! 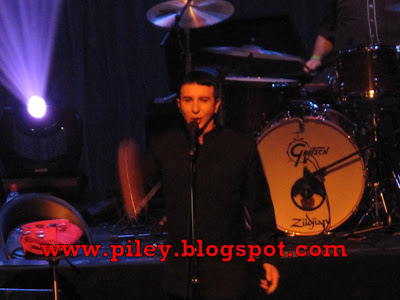 The lights went down and the usual buzz of excitement ramped up. But it's opening night, and in typical first night fashion, the huge video screen at the back of the stage malfunctioned. The footage was there, but no sound. It went blank as someone hastily stopped and restarted the video... same again... and again... and again... We see the same bit of silent footage at least a dozen times as the video was restarted time after time. The buzz of excitement was by now extinguished, replaced with ever increasing laughter. After a considerable amount of time, someone finally found the right button and the audio kicked in. We see a montage of clips of Marc through the decades, and as it came to an end, the man himself emerged from stage right to the opening bars of Memorabilia. The clumsy video gaff had immediately put him on the back foot, and he looked awkward and nervous. A nice appreciative response from the audience would certainly have helped to settle the nerves, but there wasn't much of one... gentle applause at best greeting the performance of some early big hitters. 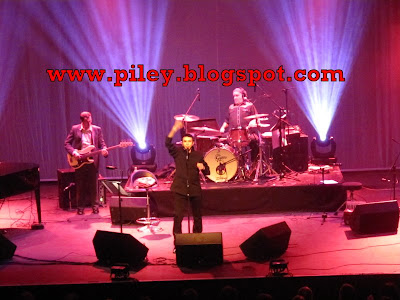 But Marc Almond is a fighter.. a survivor.. a showman! and it'll take a lot more than a dodgy video player and a luke-warm audience to beat him! Slowly but surely, the crowd started to become more responsive, but ironically, it was one of those dreaded meatheads that inadvertently kick started the evening. We were about 6 or 7 tracks in, and enjoying a heartfelt performance of Child Star. During one of the dramatic pauses midway through the song, Mr Meathead shouted "do Tainted Love"... Marc was visibly pissed off at this ignorant outburst, gave Meathead one of his Paddington Bear hard stares, flicked him the V's and managed to complete the song. The crowd gave their warmest applause of the evening as a result, but Marc wasn't finished, and proceeded to give Meat a bit of a dressing down... the crowd goes wild! Ans that was it! The spark that finally ignited the evening, and Marc had the audience in the palm of his hand from then on. 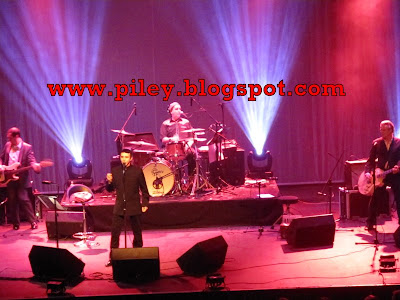 The set list was a joy, a collection of Marc tracks that I'd never of dreamt of hearing all in one show, although perhaps not quite in the right order as yet. The flow of the songs is a bit jerky here and there - high energy crowd pleaser one minute, reflective melancholy the next - just not quite allowing the vibe to blossom and bloom. But it's a teething problem that I'm sure will be tweaked and reshaped over the coming nights. 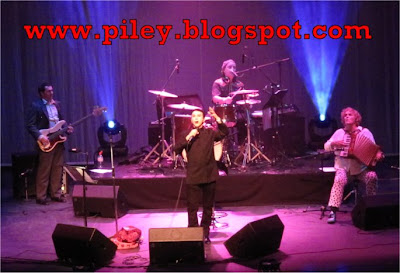 Marc's confidence grows with every song, and he gives the Mr showbiz performance that those in the know have been enjoying for the last 3 decades. He really should be a 'national treasure', although we all know full well he'll never be inducted into the heart of the nation. Vocally, this is as good as I've ever heard him sound.

I think people sometimes forget how small a part of his career Soft Cell accounts for, and there are not as many songs as perhaps people think there are. Still the Soft Cell period was well covered with the aforementioned Memorabilia, Torch, Entertain Me, Where The Heart Is, What, Bedsitter and more to come in the encore (bet you can't guess which ones!). 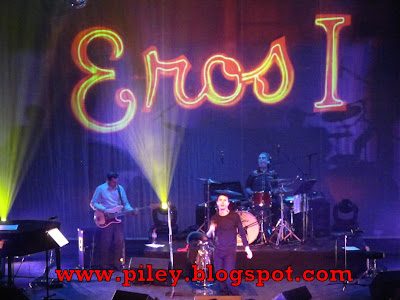 His solo career is beautifully visited - picking on almost all of his albums for a song or two... Tears Run Rings, My Hand Over My Heart, Melancholy Rose, You Have, Stories of Johnny, Tenderness Is A Weakness, A Lover Spurned, The Days Of Pearly Spencer, Somethings Gotten Hold Of My Heart, Jacky and many more were all given a rare outing. As this performance was on Armistice Day, Marc dedicated 'Gone But Not Forgotten' to all those who lost their lives in battle. Good also to see a couple of tracks from his stunning new album in the shape of Nijinsky Heart and Variety. 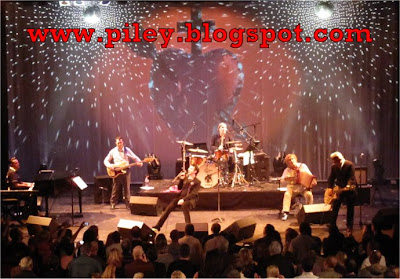 By the end of the evening he'd managed to coax everyone out of their stuffy seats, and clambering at the front of the stage, singing ("fackin") Tainted Love and Say Hello Wave Goodbye as loud as I've ever heard an audience participate. It's one of those 'hairs on the back of your neck' moments, as artist and audience become one. 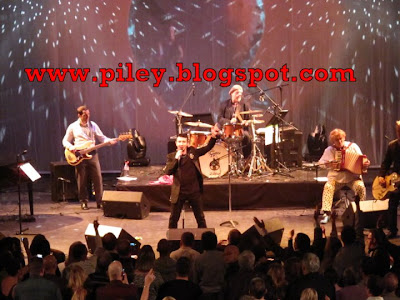 Marc seemed genuinely touched by the rapturous applause he earned at the end of the evening. I think it's still a novelty to him to be warmly received by the general public, rather than just his usual fan base.

Any doubts Marc may have been having about this tour were well an truly quashed by the end of the evening. I hope the rest of the audiences appreciate this show during the tour, as I'd say it's very unlikely he'll ever do anything like this again. He's seen he can do it, and there's big money to be made doing it, but I have a feeling the small intimate venues and soul wrenching songs will return.

Child Star - complete with Meathead midway, and mouthful from Marc at the end!


The much underrated glam rock of 'The Idol'


Southend sings its heart out to Say Hello Wave Goodbye

I'm a moderate fan, so wasn't quite the greatest hits I expected and if anything a few too many solo slowies. Having said that it was first night of the tour and he was probably keen to road test as many tunes as possible.

But, when, it came together:Memorabilia, Tainted, Bedsitter and Say Hello - it was magic, and to get those usually frown-faced Southenders singing - really is a tribute to his talent

Funny enough, two other people have mentioned that to me... Getting an always moody Southend audience to sing along quite as much as they did was no mean feat.

A great night, and completely different from anything I've ever seen him do before oddly enough.

PS - sorry for short\no comments. No internet at home at present (swapping room about), so it's mostly down to using my mobile or lunchtime at work.

Thanks so much P - Fantastic blog today!
I don’t feel quite so disappointed that I couldn’t go myself now...

A good review P, that shows your passion for the man and his music. It's funny how an adverse moment can spark the whole thing into life isn't it ?. Why oh why do lunkheads come to gigs to hear one song ??. I mean if i only liked one song by a band i wouldn't be at the gig. Good for Marc for putting Mr Essex tosser straight :).

Do you not think it would have been a good idea for members of the audience to leave little messages for Mark on the stage during the interval? These could include song requests, witty comments or just random soundbites. Sounds like a winner to me!

Ahhhh I know its Marc not Mark :(

Aw, bless Marc. And isn't it a relief when a gig with an unpromising start turns itself around?

I'd have loved to see him on this tour, but sadly I was alone in my circle of gig-buddies in feeling that way!

Glad you had a good time though, and that the Southend Miserablists thawed out a little. Anyone would think it wasn't a jolly place to live...

Aww thanks Lil, glad you liked it!

Carl - yeah, like or hate his music, I don't think many can fail to tip their hat to him for longevity and a career that has never been dull.

PH - YES!! Great idea!! This could catch on y'know! The whole auditorium could each write "fackin Tainted Love". That'll learn him!! ;-)

ISBW - Really wanted to do Shepherds Bush Empire too, but couldn't make it. Glad in the end, as it was slap bang in the middle of the weather last week, and I bet i'd never have got there!

Pretty cool, but I usually prefer "Obscurities and B sides" !

I'm with you there Heff! Good job these 'hits' tours only come round once every 30 years!! ;-)