You'll Never Guess Who I had In The Back Of My Cab...

The world wide web is an amazing thing!! Back in September I did this post about the time Laurel and Hardy came to Southend, nearly 60 years ago. A few weeks back I received a lovely e-mail from Roger Robinson, who runs the Southend branch of the official Laurel and Hardy fan club - Saps at Sea. Roger had somehow stumbled onto the blog, and dropped me a line to let me know all about the work of the club. We e-mailed back and forth for a while, and then he casually dropped in that one of the members of the club was the taxi driver who picked Laurel and Hardy up from the train station when they arrived in Southend!! I was invited along to their next meeting, and the other weekend I took up the kind offer. I was very pleased to meet up with Roger and his merry band of Stan and Ollie fans... one of which was that taxi driver himself, Ron Stokoe! 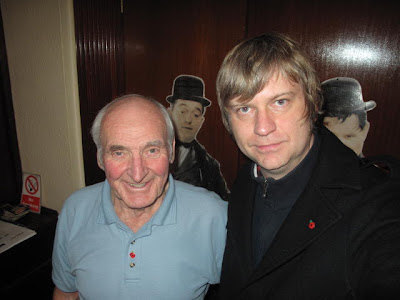 Ron was a joy to chat to, and by the end of the evening I felt as though I'd known him for years! I couldn't let this meeting go without a quick interview to capture this wonderful piece of local history, and Ron was more than happy to oblige.....

It's Sunday 3rd August 1952, and you now have Stan and Ida Laurel and Ollie and Lucille Hardy in your cab!! How did it come about?
It was about lunchtime at Southend Victoria Station, and word was going round that Laurel and Hardy were about to arrive there and would require a taxi to take them to the Palace Hotel. Someone from the Odeon was there in advance, checking to make sure that there would be a cab in the rank when the train arrived. It just so happened that I was at the front of the rank when they stepped out from the station!!

Were you already a fan of Laurel and Hardy at this point?
Not really, I remember before the War, my brother John and I, frequented the Kursaal Cinema every Saturday morning. We laughed at many of the Laurel & Hardy short films shown as second films to the feature film. But we were more interested in the serialization of Flash Gordon & his Trip to Mars! or The Lone Ranger, these serials always enticed us to go back every week… Happy days!

Can you remember who sat where in the cab?
Ollie, being the largest of the group, got in the front passenger seat, Stan and the two wives shared the back seat.

It must have felt very surreal to have two of the biggest film stars in the world sat in your cab! What were you thinking at the time?
At 26 years of age, I was completely in awe having famous people in my cab, the very short journey did not really help me to fully absorb this very special occasion.

Were you able to have any conversation with them?
They were a little reserved. They had traveled to Southend from Bradford that day, so it’s likely that the journey had taken its toll. They were only in the cab for a matter of minutes, but I did have some casual chat with them. It was mainly limited to “welcome to Southend” “pleased to meet you” and “hope you have a pleasant stay, and have an enjoyable week playing at the Odeon”. Oliver Hardy thanked me and asked how far it was to the hotel. By this time I had gone round the corner at the end of the High Street so I said “there it is!”.

Were you able to get a photo and\or autograph from the boys?
Like I said earlier, I was over awed at meeting them and it never crossed my mind. I do regret not asking for their autographs.

Can you remember how much the fair was??! Who paid for it, and did they give you a tip??!!!
I was instructed not to take any fare or tip from them, and to collect the fee from The Odeon. The charge came to 3 shillings and sixpence (17.5 pence), and I was given a tip of 1 shilling and sixpence (7.5 pence). So a grand total of 5 shillings (25 pence), which in those days was a good result for me, considering the Palace Hotel was just half a mile from the taxi rank!

Did you go and see the show whilst they were in Southend?
I didn't see the whole show at the Odeon, but while I was working - bearing in mind that evening’s are the most lucrative time for taxi’s - I did look in at the theatre between taxi fares, the taxi rank was just yards away from the venue. I recall that they did a funny sketch involving a railway station platform.

Did you bump into them again at all during their week in Southend?
No, as a cab driver I would not have approached them, unless they ordered a taxi.

Do you have any particular favourite Laurel and Hardy films?
No order of preference really, like everyone else, I can laugh and appreciate the skill and timing of all the predictable antics they display in their films – no one will ever do it better than the boys. 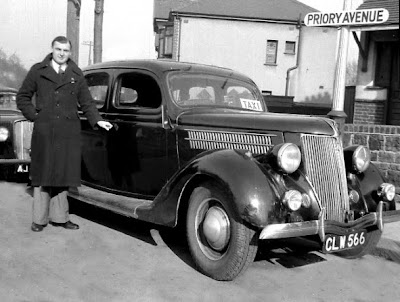 Here's Ron with the very cab that Laurel and Hardy rode in!

Many thanks to Ron for taking time out to tell me his story. Thanks also to Roger and all the other 'Saps' who made me so very welcome. I look forward to dropping in again soon for another evening of chat and laughter! They meet every 2nd Sunday of every month at the Naval & Military Club, 20 Royal Terrace, Southend. I can guarantee you'll be offered a warm welcome if you pop in to see them. You can view the Saps at Sea website here for more information.

Didn't we meet the Saps before at a certain Mr Brown's stag night?

yes correct PH, we did indeed! Roger was our host that night too!

My god, the responsibility! It'd be like transporting the Mona Lisa. What a sweet, unassuming man.

I remember those narrow, elegant road signs in Southend really well. I associate them with summer visits to Peter Pan's. Do they still have them?

Thanks ISBW, Ron was an absolute gent. It's a Cliché, but they really don't make em like that anymore. I couldn't believe it when he told me he was 83! He could easily pass for 60's. Good luck to him.

No, those roadsigns have long since gone, although the ones we do have must have been around since the 70's I'd think. You can see the photo of the one I took in Fairfax Drive at the bottom of this post... Thats pretty much what all the locals sign posts look like these days.

Do you think we should get him on the Podcasts, or at least dedicate a tune to him..

Amazing, what a result. It's good to see all this history being kept alive.

That is fabulous. It is the minutiae of everyday life which makes it all worth it.

I particularly like the fact that he wasn't a huge fan and preferred Flash Gordon. No, fawning fans round here!

Mondo - lets have a think of fitting songs to play for Ron...

cocktails - I think you are right. I love it when normal every day life clashes with the out of the ordinary. Glad you liked it!

Anything by The Meters perhaps..

Just read this post - lovely interview and so incredible to think such legends were here in Southend!(And Bradford before that!)

Fascinating stuff & what a sweet guy..

Thanks Mrs Mondo, glad you liked it - it's a fab story isn't it?? I love stuff like that.

I was absolutely blown away by the kind comments ref: my experience of being the "Taxi Driver", who took Laurel & Hardy and wives to their hotel at Southend-on-Sea, in August 1952. I must thank Roger Robinson, Saps at Sea Tent, for introducing me to all concerned, enabling me to pass on my story when I just happened to be in the right place at the right time.