Now he is Two! 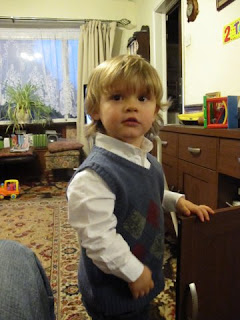 Can it really be a year since this post?! It seems impossible, but yes, Tommy turned two last week (the picture on the left was taken on his birthday). I was impressed with his progress in year one, but year two has been incredible!! This time last year he was crawling around the place, but now, although a dab hand at the 'ol walking lark, Tommy insists on RUNNING everywhere! This wee lad is a constant blur, and his journey from the front room to the kitchen has recently been clocked at almost 18MPH!!! He's a natural at stairs as well now, which is handy, as he has to climb a fair few of them to get to his bedroom.

For his birthday we went for a long walk along an amazingly sunny and warm (for the time of year) Southend seafront... which he loved! This was topped off with a visit to the Sealife Centre... which he hated! The first sight of a slippery old fish had him screaming, and he didn't let up! We are currently nervously waiting to see if we've broken the world record for 'Shorted amount of time spent in a Sealife Centre', and are really hoping that our total of ten minutes will be enough to win us that coveted prize. Yes sir, ten minutes!! And that was literally just the length of time to walk from the entrance to the exit carrying a screaming kid! Even a brief stop off at the Clown Fish to point out "hey look Nemo" did nothing to cheer him up! The moment we got outside he was fine again... one of the best sixteen quids I've ever spent!

But the above episode is actually very uncharacteristic of the boy, and as a rule he's a very happy, smiley, funny fella, and an absolute joy to be with.... Happy Birthday Son. 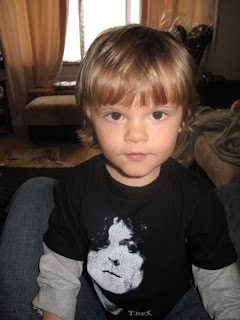 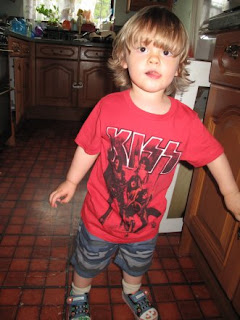 (Actually, he's still only 1 in these two pictures - taken back in August, but I really like em!!)

From what I can tell from your blog profile pic, he even looks like you!

Off to listen to Sparks now on 6music...!

Belated Happy Birthday to Tom mate.
Make the most of the pre-school years ... trust me !

What is with the the comment moderation , bit of bother in cyber space mate ?

He is a real smiler - happy birthday to the little fella. Hope he raises a glass (of juice or similar) and shakes a leg for his birthday

For gawd's sake don't take him to Swallows Aquatics nr the Carpenter's Arms though - he'll go into meltdown.

ISBW - I know I know... I just don't know where he picks them up ;-) (I have visions of him calling Child-line in years to come!!)

Cocktails - I think there are one or two likenesses coming out now... Poor kid...

Hope you enjoy the Sparks programme.. perhaps not the idea album to cut your teeth on, but it's very interesting. Like to know what you think.

EF - Thanks for the tip, although incredible to think that another 2 years and we'll almost be at that point.

Yeah, another Arse-Hole alert at the mo I'm afraid, I've got some toss monkey leaving "funny" messages. Am a bit non-plussed about it really, I'm not arsed, just feel sorry for them... whatever gets them thru their sad little day (fairly sure I know who it is too).

So yeah, sorry to everyone else re the change to moderation... hope you understand.

No worries mate, it took me two comments to realise you were moderating .... doh !

You must spill the beans (confidentially of course) next time we are out for a beer.

Happy Birthday to little Tom. He sure looked happy and contented when I bumped into you at the Village Green do. Probably just as well you didn't buy him a goldfish for his birthday.

I did like the Sparks programme, well, the first half of it - then it seemed to get very intense and musical like. Not that I don't like musicals, it's just hard to concentrate on for so long with nothing to look at. I can understand why you got distracted in the radio theatre!

I also had a listen to some of Hello Young Lovers today. On first listening, it was interesting, camp and catchy. It is, however, not the sort of thing you should listen to at work as my boss tactfully pointed out.... will have another go later!

Thanks Martin - reckon i'll need to be fairly careful with me cod n chips on Friday...

Hi Cocktails - i reckon it'll be a grower. like you say, it's pretty intense, but i'm sure the famous Sparks humour will win through after a few plays. And a blast of HYL too??! Have to confess I had to work at it for a little bit, then each track came to fruition at different times, I must of had about 6 'favourite' tracks at different stages. Worth the effort tho!

And a 'appy 'irthday to the wee man! Just wait until he gets big enough to fit into YOUR t-shirts!

Trust me mate they fly past too soon and you are looking back wondering where the time went and how your kid is taller than you and what the hell is all that facial hair on his chin about! :-)

Further - I don't doubt you for a moment! I already can't believe 2 years have gone by. When we were children, 15 years was just such a long time, you almost assumed it would never come. NOW... 15 years is gone in the blink of an eye. I mean the big Blur Vs Oasis rivalry for example... yup, 15 years ago!!! I'll be sure to enjoy every moment.

Cheers Carl... a snip too. Got the Bolan one off e-bay brand spanking new for about £3, the Kiss one was a TK Maxx jobbie for about £4. How can you not have em eh??!