Good friend Dave Whit put me on to it, and boy am I pleased I finally managed to get there at the weekend....

You may remember back in August me banging on about my love for the dear old sadly departed (and much missed) Odeon in Southend, and I've been on the local nostalgia buzz ever since. Well blow me, a local photographer from the 60's, Derek Cross, has just found a stack of old negatives in his archives... out of curiosity he starts to develop one or two, and he's only got professional press photos of just about every legendary act from the early 60's, all taken whilst they were performing at the Southend Odeon! 'Unseen 1963' is a fab little exhibition in Leigh-on-Sea, displaying a selection of these recently uncovered photos. 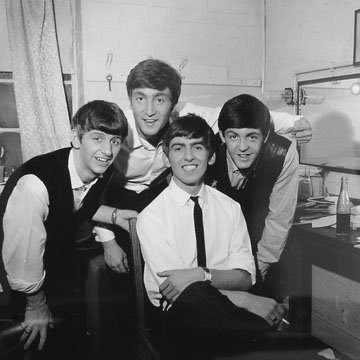 There are a mixture of both posed and candid photos on display, and whilst the posed ones are great, I couldn't help but be drawn to the candid ones. Each one spoke a thousand words... There is a wonderful one of the Beatles presenting a girl with a competition prize (which was a crude wooden toy of themselves!). The prize winner is quite young, and as such all 4 Beatles are bent in two to hand over the prize! You hardly even see their faces, just the 4 mop-tops and a very excited little girl!

Another great candid shot shows the Beatles kicking around the auditorium, whilst the stage area is being prepared for the show. In the background is a piano with the name of the legendary local music shop of the 60's and 70's emblazoned across it - Hodges and Johnson.

As well as a good dozen or so Beatles shots, amongst others included in this exhibition are Rolling Stones (group shots and solo), Cliff Richard, Everley Brothers, Roy Orbison, Johnny Kidd and the Pirates, Dusty Springfield, The Kinks, Helen Shapiro, The Hollies, The Shirells, Bo Diddley, Freddie and the Dreamers, Joe Brown, Adam Faith, Duane Eddy and The Searchers.... and rather oddly amongst all that lot... Alistair Simm!! There are also a couple of great shots showing the crowd entering the Odeon for one of these shows. I also found the photos of bands that hadn't made it interesting too... one is simply labelled "four men sitting on steps (unknown)". 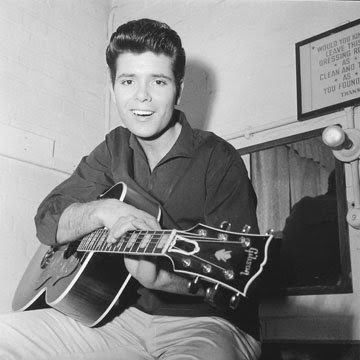 I spoke to the gallery owner (John Lister) about the display, and asked him if what was on display was the complete collection. I was shocked when he said there were more... even more so when he disappeared off and came back with a box full of undisplayed gems!! Oddly enough, my favourite picture of the whole lot ended up being one from the box!! A brilliant shot of Ringo Starr, fag hanging out the corner of his mouth, sitting in a dressing room chair. On both arms of the chair were tall piles of autograph books, all open on the page requiring a signature. Head down, he was busy working his way through the lot! Just in the corner of the picture, almost out of shot, was George Harrison reading a fan letter! What great times eh? Would we have any faith in a band of their popularity actually receiving (let alone reading!) a fan letter handed in at the venue today??

Alas this exhibition closes this coming weekend (last day Sunday 29th November). John told me that there had been some interest from the odd London gallery, but other than that, the future for these photos seems a little unclear. A lovely, overpriced coffee table book would do these pictures a real justice, and I think it's important to keep them together as a set, rather than splitting them up for Beatles books, Stones books etc. It captures an exciting time in both the history of Southend, and the British music scene in the early 60's. 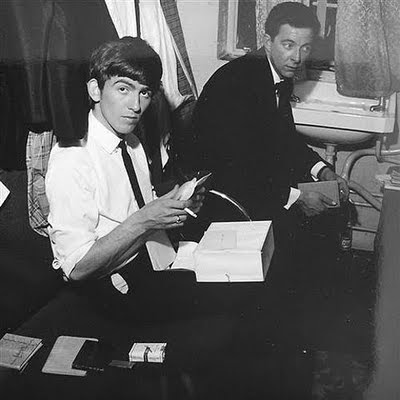 In the unlikely event that you find yourself in the area between now and then, I can wholeheartedly recommend it. I'm certainly hoping to get back for another peep before it goes.

Atelier Gallery (almost opposite The Grand pub).
96 The Broadway
Leigh-on-Sea

Sounds excellent stuff Piley and surely a good case for a local consortium/subscription group to put up the money to publish.

The profits could go to the local charities that local groups, like Rotary etc support, who themselves may have the cash and contacts to make this a reality if you're serious about it.

Local history books tend to go down rather well everywhere, and this one would have appeal on a much wider basis. Why not look into putting a little consortium together? I'm in if you do.

It's great, great expo - and incredible to see so many heavy-hitters hanging out at the Southend Odeon. As you say the Hodges and Johson Beatles shot is a almost bizarre coming together of two worlds (I bought my first acoustic guitar from H & J).

Wish I'd known about the box of extras out the back though..

Personal faves are the Fabs ones, the Stones individual portraits and the Bo Diddley pics..

PS - Did you see The Vernon Girls one..I've got a couple of cracking tracks by Samantha Jones ex-Vernons..

And as OP says a book may be a better idea financially.

The gallery owner told me, he hadn't sold that many, no surprise really considering the prices. But if they'd been in book form - it would have made a perfect Christmas gift..

A definite "book" of the photographs surely, even if it's a self published one. Although it's great that the world sees them, it's also a little bit special seeing them, to look at in your hands than it is on a monitor.

Are there any local celebs you could sweet-talk into stumping up for a book?

Is Peggy Mount still alive, for example? She used to live in that great big house with the green-tiled roof...

Hi OP - good to see you in the land of blog once more!! I think you're right, there would probably be more people up for this than perhaps they realise. I guess it's easy to look at this as 'local interest', but take a step back and it's global! What Beatles and Stones fans wouldn't wanna see never before seen pics of their idols in their prime?

Mondo - Yeah a real winner. Was buzzin on it for days after. Only luck and me hapening to ask the right question that got 'the box' out to play!! It's a small gallery, so I guess they had to just pick the best ones, but shame a photo album or such like couldn't have been set up for people to at least see the remainder (there were quite a few). The prices were steep (£90 for the 8x8's, £120 and £240 for ther 12x12's, and a whopping £400 for the 16x16's) and there is no way i could justify that sort of money for what is, at the end of the day, a photograph. But I'd be happy to pay 50 or 60 for a nice book with some quality repros in - be nice to include the stuff from the box too.

Hi Mark, good to see you back here again! I'm with you all the way. Yes, pictures on the net are 'handy' and 'convenient', but there is no replacement for holding a quality photo in the hand and enjoying it. As I said above, I'd buy one, and i'm sure it would cross over to general music fans of that era.

ISBW - Hmmm, not sure. Poor 'ol Peggy went some years ago (at one point she literally lived in the road next to mine in Leigh-on-Sea)....

OK, here's a list of people who came from the Southend, Leigh, Basildon type area and made good (and promptly f**ked off mostly!)

Jake Shillingford (My Life Story), but now lives in your neck of the woods.

Helen Mirren was a Leigh-on-Sea gal

Vivian Stanshall (from the Bonzos)

Phill Jupitus is a regular face around Leigh-on-Sea

Domonic Littlewood (annoying bald bloke from the one show)

Blimey, thats more than I thought!! Couple of grand of of each should kick start the project eh??!

Now I know what you were talking about Friday night when I went to the bar ! Wish I had got down there with you.

Did you have to mention Menswear ? Gary Wilmott was embarrassing enough ! Please tap up Dr Feelgood, Gemma Craven and Mark Foster as well.

I love that shot of Harrison and Epstein. Candid ones are always the best. A book would be a good idea. Do any shots feature the celebs being taken next to a prominent Southend landmark, I'm wondering wether the Fab Four walked the pier.

EF - oh yeah, thanks! good call. I also rather criminally left our Barrie Masters (Eddie and the Hot Rods). It was a peach of a exhib mate, but hopefully it'll turn up in some form or other at some point. Well worth a look.

Hi Ist - No, all the shots are inside. So in some ways, they could have been taken anywhere, but it's the same manky sink, and crabby dressing room behind most of the shots! Thats what made this so special... had these megs just got split up and off to 4 corners of the globe, nobody would have known where they were taken, but as they had miraculously all been kept together, the continuity was there. The nearest to any Southend type landmark was the 'Hodges and Johnson' piano I mentioned in the post.

Nice post Piley. I really do hope a gallery does take it in London. Great pics and yes I agree a book would be brilliant. I'd buy it!

Just cant see these nuggets turning up in another 50 years. Modern day acts that are comparably recognised are discovered on X Factor or on the internet, so wouldn't have served their time at provisional venues like S-o-S.

Unfortunately I never got round to visit this exhibition. Shame, as I always think local things like this should be supported. Be nice to see a book of it all.

thanks RM (good to see you over hear again BTW!). If I hear anything about it heading to London will be sure to let you know.

Warble - yeah, nobody is interested in "payin their dues' these days. All gotta happen right now. Mind you, don't think the record labels are interested in it either, remember the old days when a band might release 6 or 7 albums before getting a hit?!!!

Martin - it was a treat, but i'm sure it'll be out and about again at some point. Let you know if I hear anything.