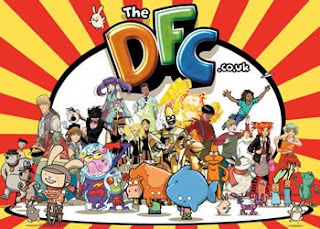 You may remember me championing the launch of a new 'anthology' kids comic last year, The DFC. A brand new (admittedly rather middle-class) title that has real morals, aimed at children aged 8 to 12 (although this 40-something has enjoyed the ride too!). The serialised stories within (a mix of humour and serious) are of great quality and, unlike the dumbed down pap we tend to expect these days, actually treat kids with a bit of intelligence. To date there has never been a single advert inside, no cheesy promotions for products or plastic toys stuck to the cover... just wall-to-wall original stories.

As a subscriber from the start, I've really got rather used to it arriving in the post each and every Friday (oh yeah, that was the other thing, rather than be held hostage to the like of WH Smith who demand something like 35% of the cover price, they went it alone and made it a mail order only affair).... but today I hear the comic is in deep trouble, and in a press statement has been labelled 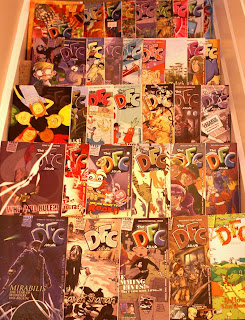 As a life long lover of the British comic this is sad news, and possibly the final nail in the long tradition we have with anthology comics for kids. Who knows why it didn't work... Maybe it was the cover price (£3)?, but the production quality was such that it was actually worth it, maybe it was starting a new luxury comic for kids during a recession? Maybe it was the lack of awareness of the title and the fact that nobody 'bumped' into it in Tescos or Smiths? It certainly wasn't down to the quality of the stories, artwork or the effort that went into getting it out there every week.

I've been filing my copies away safely, and was looking forward to introducing my son to the comic when he was old enough, sadly that's unlikely to happen now. His only glimpse will probably be as a defunct piece of history.

that is a shame, I only picked up one issue (would have been nice to have been told about it early piley) that was in Tesco. and I have to agree it was really well written, different art work in each story, and no adverts.

its shocking that some of today's comics, Simpsons, transformers, spidey, are more expensive, contain less, but have a chunk of shit plastic stuck on the front that sells them.

It is a shame, but on a positive note maybe the ltd release Tesco version might be worth something soon.......

Cheers Anon (Keaneo by any chance?, judging by the cheeky 'early warning' comment!).

Yeah, not sure what happened about the Tesco experiment, not much by the shape of things. The DFC did a deal for one week only to sell an exclusive version via their outlets. Never heard if it sold well (or at all), and assume they didnt really pick up many new subscriptions from it either.

I have been under the impression that things were going ok - My subscription number is 48,200, and I signed up quite early. So thought it looked healthy.

Mind you, a number of those subscriptions were '6 monthly' ones, and I'm wondering if a large amount didn't re-new, putting them in the position they are in now? Credit crunch and all that...

I reckon the problem was that MOST kids that age don't go shopping for comics on the internet they browse the racks in the local shops. Had they have got it into stores may be they would have had a hit on thier hands and then been able to go more "indie" later. Never read or even heard of it sounds intersting though.

Piley, it's a real shame that the DFC comic looks likely to close. This comic made huge efforts to appeal to a wide cross-section of readers and has consistently featured superb artwork and story. It certainly didn't fail due to the quality of the strips.

It's a sad day when a truly innovative and 'all-original' new comic cannot afford to be displayed on the shelves of WHsmith, and have to survive on a subscription only basis.

I really do think it will be a long time before another pioneering publisher risks their shirt on publishing original comics which don't pander to the current TV/toy character franchise.

I'm a bit gutted by this. I've been a subscriber (for my daughter...really) and get a kick out of the awesome amount of energy that is squeezed into each issue. There is nothing on teh news stands that comes within a galaxy of what they achieve.