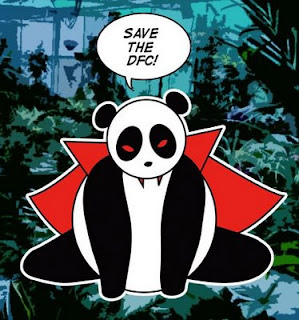 You've put up with me banging on about the British kids anthology comic 'The DFC' a couple of times already... Once when it started, and again earlier this month when news came through that the publishers (Random House) were pulling the plug on the title.

Well this week saw the launch of a brand new blog here on blogspot, Save the DFC. So strong is the belief in this comic that a group of readers\parents plus the creators of many of the DFC strips have got together to try and raise enough money to stage a subscriber 'buy-out'.
The artists and writers seem as genuinely upset about the news, as the kids who read it. They have worked hard to produce quality stories, some that have been serialised over many weeks and months - many of which will now not be able to have their conclusions published. So they are asking people who would like to see the title saved to pledge money and help them to buy out the comic from the publisher. A bold idea indeed! and a genuine show of solidarity and respect from those who have bought or contributed towards it. The blog is keen to point out that they "are not looking for any money unless we manage to raise sufficient pledges". I wont go on again about why this comic is so unique, and why it is worth saving (see my 2 previous posts for those details), but I've already been over and offered em a few quid (there is a pledging link on the site), and if you...
a) have fond memories of 'proper' comics when you were young;
b) believe in giving kids a quality product, with intelligent stories, aimed at introducing them to the world of reading; or
c) just really admire this amazing show of support from the artists and writers...
why not pop over and offer them a little something too... Let's see if we can Save the DFC.
Piley