In Praise of Freddo! 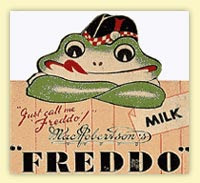 Y'know, chocolate bars they come and they go.... and the ones that stick around, they go up and up in price, 60p now for most of your average choc bars. But there is one little fella who has been kicking round since I were a nipper, offering the lure of a tasty treat and acne to kids for generations.... the credit crunch bustin' Freddo bar! Yup, Freddo's are a regular staple in my diet, and of course, it all helps to get that all important 5-a-day...

Still only 15p, Freddo offers a surprisingly decent amount of chocolate for your money, yet apart from me, does anyone ever buy one??! Believe it or not, the 'ol Freddo bar has been going since 1930, but originally it was made by MacRobertsons (who??!). In 1967 Cadbury's bought out MacRobertsons and the bar started to turn into the bargain bite that we know today.
Freddo facts that will rock your world!!
1) Freddo is the number one chocolate in Australia! They get through 90 million of them every year (not sure if it's the most popular based on quality or thrift tho!)

2) Due to it's incredible popularity, in Australia there are no less that eight, yes EIGHT, variations of the Freddo bar: dairy milk, dairy milk with caramel filling, white chocolate, rice crisp, strawberry, peppermint, rainbow crunch (no, I don't know either!) and milky top (a Frankenstein's monster of a bar where one half is milk choc and the other half is white choc)... Finally emigrating starts to appeal...
3) The creator of the Freddo bar (Harry Melbourne) only died in 2007, aged 94. I wouldn't be at all surprised to hear he put his long life down to a daily diet of all eight varieties of his invention!
Can anyone beat the Freddo for quality AND price? Any other gems past or present?? 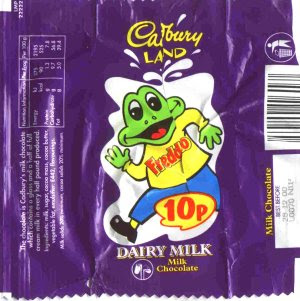 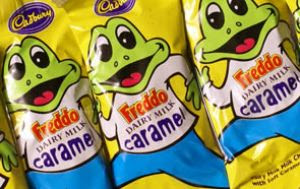 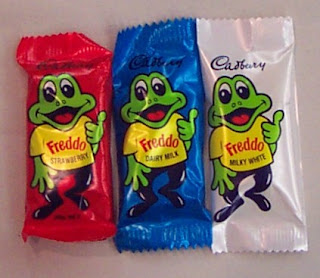 UPDATE: Over on the Cadbury's website they have a whole page devoted to long gone Snacks from the 70s.

Top work P - I thought he'd only been going since the 70s.

One of my faves are the Tunnocks Caramels looking like they've lifted out of Private Pike's lunch box..you can get a tour of the factory here

Gone but but not forgotten faves are...

Fredo is alive in our Fridge ! My little 'un is a fan and I am always up for wolfing one if the opportunity arises.

Feddo was tasty but never filled me up even as a nipper , too small. Do you remenber the Texan bar ? , milk chocolate over caramel or summat ! , took about a week to eat one , they were tops!. Golden Cup !!!! oh man they were handsome forgot all about that bar and what about Mint Cracknel i ate so much one xmas i honked all over my bed , superb !.

When I'm going through a 'must lose weight you fat c*%t phase' I always reach for a Freddo to give me that chocolate fix without the calorie overload of a king size peanut Kit Kat. My daughter is now also a Freddo Fan and always goes straight to their section in our local confectioners. Her only dilemma is whether to go for purple or yellow!

Carl, we must meet up over a Caramel soon!

Carl - I remember Texans well. I always assumed they were withdrawn after protest by the British Dental Federation, I could be 2 hours trying to eat one of those buggers !

Anyway, I was saying that the only time I ever seem to eat Freddos is when I'm home in Australia. They are, alongside Cherry Ripes and Twisties, the things that I seem to go straight for as soon as I get off the aeroplane.

Freddo has a sister chocolate in Australia too - Caramello Koala. Same size and price, just as good.

Mondo - Wow, some blasts from the past there mate! Remember that pretend tobacco that even came in a little pouch (just like grandads!)... it were coconut shavings but looked the biz!

EF - your love of the chocco is legendary! Spotted (a finger of) Fudge today funny enough, yup, another bargain bite (funny enough, i ended up with a Freddo tho!)

Carl - Flippin 'eck, Texans were a workout for the teeth, even in our young days. I'd fully expect to find them all stuck th the end of the bar if I tried one now!

Cocktails - please don't leave us without giving us more details on the EIGHT Freddos!!! Give us the lowdon on a Rainbow crunch! What the hell is it?! Whats it looks like??!

PS - Carl and JD, why not buy a box of caramel Freddos and eat em whilst listening to all that Frank Sidebottom back cat??! ;-)

Didn't even realise you could still get them. Use to love them because, a) they were chocolate and b) they were good value for money. Whatever happened to Aztec bars? that's what I want to know. They used to be about the size of a mars bar in a dark blue wrapper if i remember correctly. Can't help feeling that the sweet police should be called in to find out what happened.

Unfortunately and embarrassingly, I can't help you out there Piley. I like my chocolate plain and boring and only ever eat the caramel and milk chocolate varieties. I am intrigued by the rainbow one now myself though... sounds disgusting...

Good stuff - I'd forgotten about these.

Another fine over-seas product I've never seen, or heard of. But WHY a frog to sell chocolate ?!?

Anaon - Aztec bars eh? It rang a bell... ended up on the official Cadbury's website where they have a whole page devoted to long gone Snacks from the 70s. Guess what? the Aztec bar is there!! Alonside other classics such as Old Jamaica, Skippy, Fuse bar, Frys Five Centres (for Mondo!) and Amazin Raisin bar!

Furtheron - Bar Six!! nice one!! Another Cadbury product if I remember rightly?? anyone remember a Pink Panther bar? which was, unsurprisingly, pink chocolate??

Heff - reckon it's the frog bit that sells it for me!! it's so odd it's gotta be good!!

Admirable research here, Piley. I like the odd Freddo - like a Finger of Fudge, it's just enough - but had no idea I was biting into such heritage.

I can vouch for the Cherry Ripe, for any Brits who miss the Cabana bar. Very similar, like a dense and tasty Bounty. Cherry Ripes can be purchased from The Australian Shop in Maiden Lane, London, for anyone working in London, or passing through. Buy at least five.

There's nothing like the mention of childhood sweets to get your 'nostalgia gland' working...

I was never a fan of Freddo, i'm afraid - they were a bit on the weeny side, but did love several of the 'extinct' chocolate bars shown on that Cadbury website. I remember tasting Amazin' Raisin, Aztec and the others, but there is one bar that isn't mentioned - and it was my favourite. I'm sure it was called 'Summit Bar' and must have been around in the late '60s. I can't find a single mention of it on google, but am sure it existed. does anyone else remember the elusive Summit bar?

i no they aren't as old but i dont mind a chomp bar. 10p and last a why. Or is it a poor mans fudge!

I Should - you can't beat a Freddo eh?! Cheers for the tip off re the Cherry Ripe too...

Dave W - Give Freddo another try, it's chunkier than you might think. Never heard of the Summit Bar.

Axe - you always were a man of few words!

I think Chomps are just a full fat Curly Wurly, exactly the same taste without the holes!

I remember the Summit bar, and if it's the one I think it was, it was 'Swiss styled' with the wrapper featuring a picture of Mont Blanc or the Matterhorn. I was I think, yoghurt/nougat covered in choc, might have had hazlenut flakes in it.
Had a glued end silver lined wrapper. It was a flat shaped bar, not a chunky one.

Or am I thinking of a Swisskit?

It's a hard job remembering sweets from 40 years ago - but I'll risk it for a Swisskit!
Not my favourite, but not as disgusting as Caramac. That was truly too-sweet.

E.F - Hmmm, a shrewd spot that. Funny enough I worked out this week that my fave treat this time of year (Mini Eggs) are nothing more exotic that egg shapped Minstrels! (just a different colour and more expensive!). Mind you, at least i'm consistent, the other 11 months of the year I'm a bugger for a bag o Minstrels, so at least it all makes sense now!

Office Pest - Blimey, well remembered! I've had a scoot round Google and can't find a mention of it anywhere - Was starting th think Mr Whit was losing his marbles... Caramacs were indeed vile. Ok on the first bite, sickly by the second (but you STILL went for the 3rd! YUK!). Thanks for dropping by OP, don't be a stranger!

The comment on 'Summit bar' left by Office Pest sounded promising at first, but I think he may be referring to Swisskit, as he suspected. Thanks anyway, OP.

I've searched on google again and can only find an American 'Summit Candy Bar', which bears no relation to the British Summit bar.

Piley, As for Caramac - as a kid i loved that too. Has that one gone too?
Keep up the good work Piley!