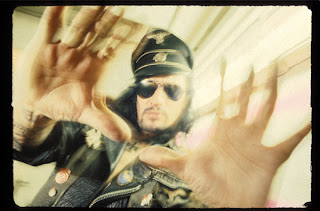 It's funny how you get the sudden buzz to listen to stuff.... stuff you haven't played for years... stuff that's been lying dormant in the record collection, untroubled by a needle for a decade or more... All of a sudden it becomes essential listening again. And that is just one of the reasons I never chuck out old records, coz you just never can tell what's gonna be floating your boat next time... this last couple of weeks it's been Zodiac Mindwarp and the Love Reaction!

There were two things that put Zodiac Mindwarp back on my radar...

1) Bloggin buddy Planet Mondo doing a recent post about his days in an 80's Glam band, who supported the Zods a few times back in the day (Mondo went on to get an article publish in The Word magazine, regaling his tales of sharing a stage with the self proclaimed "love dictator").

filthy/outrageous, rather than poorly written!).... I may not have read them for some years, but BOTH of Mark Manning's (for t'was he that was, and still is, Zodiac Mindwarp) disgusting tomes have permanently scared my brain, so it was an instant reply. After my 'recommendation', the person asked if they could borrow them, so I dug them out and had a quick flick... Shit! Although I have them both lodged in my brain as pure evil, I couldn't quite remember why any more... the quick flick provided a handy reminder!! And I'd just agreed to lend them to a girl in the office!

Anyway, all this Zodiac talk got me a-buzzin to hear some of their stuff again, and in particular their defining moment (for me anyway), the mini album they made for Food records early in their career - High Priest of Love. Unlike some old treasures that you dust down, I was delighted to find that this LP still hits the spot, 6 dirty, biker rock tracks full of the sleaziest guitar riffs and Zodiacs trademark single-entendre lyrics!

It's almost exactly twenty three years since I discovered Zodiac Mindwarp... 27th March 1986. They were the 'filling' in a 3 band sandwich at the Queens Hotel (a legendary Southend venue in 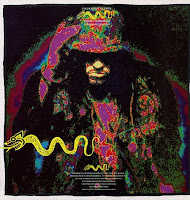 the 70's and 80's.. now a block of flats). Zodiac were the only group in the line-up that I didn't know. First band on were Mondo's Ladykillers and the main act were Dr and the Medics. In between stumbled the dirtiest bunch of reprobates I think i'd ever seen! all decked out in Nazi regalia and German helmets.. It certainly got your attention, as did the blistering set they proceeded to perform. I went on to see them a few times in the next year or so, they had an aura of danger about them, they were edgy and not a little psychotic (the two autobiographies have since proved my initial instincts to be completely correct!).... But looking back on them now it all looks quite comical!! More 'Bad News' than anything else!! but time's a funny thing isn't it?! They still sound pretty convincing though, check out these videos...

My favourite Zodiac Mindwarp track 'High Priest of Love'... Fast forward to 1 minute 30 as the song doesn't actually kick in till then! Some great early footage weaved in to this compilation vid.


Hows this for an odd-ball match up? The Love Reaction mime backing band for Belinda Carlisle!

Maybe once I've read the Slash one sitting about for ages I should look this one out... ;-)

Maybe not - it'll only remind me what a boring life I've led.

Cheers for the linky P, yes two gigs with Zodiac and he was never out of character at either. There was no off button with him - during the soundcheck and backstage he WAS Zodiac all of the time. They literally only made the Queens Hotel gig by seconds, it was so close we'd been primed to take their place if they didn't show.

At the second gig (Toothbrush), they brought Alsatians with them, and cleared off to the arcades on the front between soundchecking and the show..

Did I tell you I met up with Flexipop inventor Barry Cain last year - he employed Zodiac/Mark Manning as the mag's graphic artist and said he was just as mad then, Flexipop got sued by Toyah for one of Zodiac's derogatroy illustration of her..

PS have you tried Motley Crue's The Dirt another sleazy read

Further - to be honest mate, some of those chapters will make you fell VERY happy about that boring life!!! It's rough!

Nice one Mondo - have you ever checked out the Pandora's Grisly Handbag CD and DVD set?? all from those early days (mostly 86). These is some footage on there called something like "a day at the seaside" it's them messing about in amusement arcades, and i've always sworn that it's southend. Could well be the footage from your Brush gig??

Ahhh the memories !.First off thanks for the link to download that Zody mimi album P(not on CD so don't bitch at me for not buying it huh folks :-). I was at that Queens Hotel gig too though for some reason i did not see Mondo's bunch of Ladykillers (musta been at the bar, did see em at Pinktooth Brush one time though)i was gobsmacked by Zodiac and co. They looked filthy and were certainly a noisy bunch, it was good. I saw em at the Toothbrush later with Terrorvison supporting (again i must have missed the gig with Ladykillers at the brush) and at Reading Fest too. They were great every time. It does all seem a bit Bad News now BUT it did at the time too and thats what i loved about it. They were not taking it too seriously and having fun, where as that twat in Sisters of Mercy seemed deadly serious (and fucking boring). I borrowed one of those Zody /Manning books off you mate, a great if at times slighly disturbing read. Furtheron / Mondo i think The Crue and Slash books are essential reading but fuck me i think i'm glad of my (semi) boring life. I cant believe these guys are still alive , absolute madness. I thought having a few lines of charlie here and there over the years was rock n roll but phew !!!i'm a light weight. Actually i think the first Motley Crue album is a brilliant slice of sleazy power pop metal (they kinda lost it a bit after this though)and again it was fun not to be taken too seriously. Mark Manning also worked on a poster magazine called Metal Fury too and his bass player Haggis ended up in The Cult and The Four Horseman a brilliant US boogie band. Check out thier album NoBody Said It Was Easy, real dirty AC/DC/Quo boogie rock n roll. What with posts on Sweet and Zodiac you are spoiling us Mr Piley :-).

Zodiac Mindwarp, back in the heady days...

On an only vaguely related tangent, Gaye Bykers on Acid apparently used to play as Lesbian Dopeheads on Mopeds to earn a bit more money as their own support band.

Only ever heard a few bits 'n' pieces, which i liked, but never followed it up for some reason. The books sound like they may be worth a read. Any idea if they're still available?

Hi Barnaby... GBoA! ha ha! Those were the days!! Did you see my posr a few weeks back loosely (and i mean LOOSELY!) based on Neds Atomic Dustbin?

Anon - They are both out of print but do turn up. Oddly the newer one (FBR - 2001) is harder to pick up than the older one (CMA - 2000). Both are available on Amazon, but FBR is a bit pricey, about £25 for a second hand one. CMA you can pick up for around a tenner. Ebay is always worth a look too.

Oh by the way, if you want that 6 track mini album (as Carl mentioned, it never did come out on CD), you can download it from the Glamoorama blog Here

I missed the Queens gig and the Brush one as well but caught the band at The Esplanade.

Indulged a bit to much on the night to remember much other than it was damn loud and very hectic down the front.

Ah! those were the days.