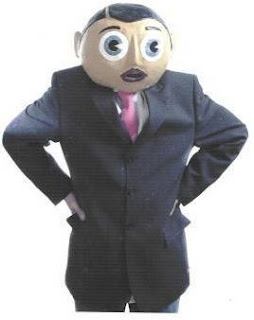 This post marks the start of a new semi-regular feature here at 'Start the Revolution Without Me'. 19 questions, to be posed to various musicians, bands and people I like... It'll always be the same 19 questions, so it will be interesting to see how the answers vary over the months.

I'm delighted to say that Frank Sidebottom is my inaugural guest, and provider of the very first 19 answers! Yes, Frank Sidebottom, he of paper maché head, cult comedy hero and maker of genius records for some 25 years or more. Over to you Frank....

2. Where are you at the moment?
at my mum's in timperley..

3. Who inspired you as a child?
scott, the tracy brothers..

4. What was the first record you ever bought?
one of paul mccartneys first band (the beatles)....

5. What's your all time favourite song(s) or album(s)?
i like all my songs and the mini album "introducing thunderbirds"

6. What was the first gig you ever attended?
i supported r.e.m. at the gallery in manchester in the early 80's (there were 35 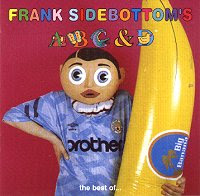 7. What was your 'biggest break' or 'luckiest moment' in establishing your career?
supporting r.e.m. at the gallery in manchester in the early 80's .... their singer said i was "far out" !!!

9. What's your most 'Rock n Roll' moment?
being chased by gary glitter's roadies at salford university... (you'll have to wait for the movie).

10. Worst moment of your career?
being chased by gary glitter's roadies at salford university.... (the movie is currently being cast,... but i don't know who will play me yet !).

11. What are you most proud of?
having a movie made about my life (by film 4)

13. If you could perform with any artist (dead or alive), who would it be?
paul mccartney (without wings)

14. Name one artist you really think I should check out?
my manderin greenhouse 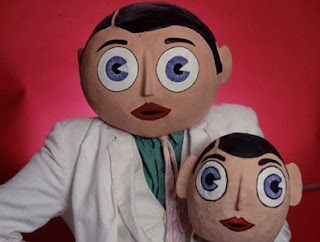 18. What are you working on at the moment?
"frank sidebottom saves coney island" u.s. vinyl only release,... and two tribute tracks for a john cooper clarke album,... plus my own "e,f,g & h" album,.. and my next "franksworld" animation.

19. How can people find out more about you?
www.franksworld.co.uk


19 cracking answers there ("...you know they were... they really were...")!! Many thanks to Frank for being such a good sport. As well as his official site, you can also find out more about Frank at the following sites:

Loads of info over at www.franksidebottom.co.uk/

Here's Franks' very own version of The Smiths' Panic:


Here's a clip from Franks' TV Show - The interview with Iain Lee is fab!

Top Work - can't wait to see who else is on the guest list..

Donned me big shorts to read this one Piley! Any clues to future guests ? Bowie, Almond, Wogan ?!

EF - Hmm, don't wish to disapoint, but you may have to slightly lower your expectations there... only a little tho! Glad you donned your big shorts, already for the footie tonight eh??! I have a vivid recollection of seeing Frank at the Reading festival, with you, Brown and Marmite... "ohhhhhh frankie frankie... frankie frankie frankie frankie sidebottom" You remember that??!! Think the mad dog had been flowing like, um, cheap shitty meths!

I wonder how Little Frank is though. He was always good for a laugh the cheeky monkey?

That Reading gig was fantastic if slighty bizarre. A tent full of pissed up lads singing songs to a man in a Paper head draped in an Altringham scarf. Marvellous.

Nice one Piley, got stacks of Frank's stuff on vinyl up in the loft - must find myself a record player and give it all a spin again. You know I must, I really must. Thank you.

It's funny as soon as i saw this post i thought of my old mate John D. And there he is posting a comment. When you dig that stuff out again John you will have to invite me to listen in as i've so far failed to see the "genius" of this man :-). Nice papier mache head tho.....

EF/Marmite - Yeah top gig, think we blew out Nirvana or something in favour of Frank!

JD/Carl - Yeah, you guys should have a Sidebottom-fest one weekend, no fuck it, make a week long one!!!

Frank Sidebottom's BRAND NEW ALBUM, "efg & h", has just been released and is available to buy on ebay from Frank himself !!! If you buy from Frank you will get two free badges (brand new designs), and an autograph to you!!

Here is the link to Frank's ebay auction,...