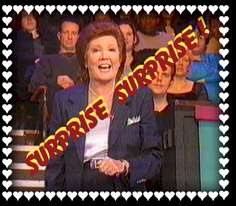 Way back in 2007 I did a post about my first ever gig. It was in 1981, when a 'heavy metal' band called Cyrus played at my school. The postscript to this story was that 15 years later, a chance conversation with a work colleague (Martin) exposed the fact that he was IN Cyrus!! Well, I now have an even better postscript to my postscript!!!
I rarely look at my site stats these days, but as luck would have it I did have a glance a couple of weeks back. I was surprised to see that someone had hit my blog by typing in the following on a search engine "Pete Calvert Cyrus"... Blimey I thought, what's the chances of that?? But when I checked my e-mails later that evening, it all became clear. A certain Mr Pete Calvert was on-line, and couldn't help doing a bit of 'ego surfing', and stumbled onto my post. 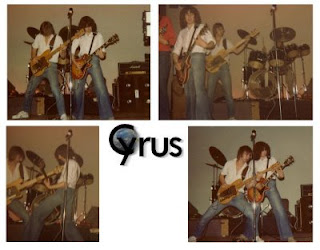 The best bit about it though, is that Pete and Martin had lost touch with each other about ten years ago, and 'Start the Revolution Without Me' has been able to re-unite 'em!
I've been speaking to Martin in the last few days, he told me they became friends at Grays Comprehensive school in the early 70s, and Pete was responsible for teaching Martin to play guitar. They started their first band together at school, called 'Bad News' - which I'm reliably informed was years before the Comic Strip spoof heavy metal band! Pete later went on to start Cyrus, and in the early 80's recruited Martin into the band when their original lead guitarist threw in the towel.
According to Martin, the last he heard from Pete was a phone-call sometime in the 90's. Half way through, Pete said "can I phone you back in ten minutes..." Once the new millennium kicked in, I think Martin finally realised the return call may not be coming, and he later heard Pete had upped-sticks to Hong Kong! Pete is now back living in deepest, darkest Essex, and the lads have arranged a hook up. No doubt first on the agenda will be what the hell happened to that return phone call!
So there you have it, the internet works in mysterious ways! If you have a long lost buddy, or are looking for that perfect partner, why not drop me a line and I'll see what I can rustle up!
The below video is especially for Pete and Martin!
Oh and by the way, should this lead to a reform of Cyrus or Bad News, I'm putting in my stake now for 10%!
Piley

Wow fantastic and being a mate of Martin's too I'm really pleased for him. If Pete is responsible for teaching Martin how to play football as well, I would also like to meet him ! (only teasing Mart!).

Great stuff and I expect you to don your fake Cilla teeth next time we are down the pub Piley.

You can't knock the 'net - it's an incredible thing for bringing bods together...although if they have a fallout, are you liable for the counseling bills...

Blimey, not only have I learnt loadsa stuff since reading this blog, now I'm being put in touch wiv me old mates. There's not gonna be a bill for this service is there? Expecting to meet up with Pete soon although not too sure if this will be in Hong Kong or Hockley.

Be careful what you wish for...

Nazz Nomad said...
This comment has been removed by the author.
Tuesday, February 24, 2009

Hey, I lost Twenty Pounds at the Marquee back in '89. It was in December.
Can you help?

PM - crazy init?? I'll be looking to reform that iffy 'ol goth band we had round here in the 80's next, what was their name again?? Ladykickers??

Anon\Martin - I like to think of STRWM as a one stop shop for all ya needs... lemme know if you'd like me to drop round a pinta or a loaf of bread if you're short...

Furtheron - I don't mind who i reunite, as long as i'm on for 10% of any revenue generated!!

Nazz - this could take some searching, did it have the queens head on it? If so i MAY have seen it...

Now THAT was a cool post. What are the odds ?

I did chuckle that there was actually a Heavy Metal band called Bad News. I had the miss fortune to see the Comic Strip mob twice once at Donnington and once at Reading Festival. They were funny for nano seconds. I was at that same Cyrus gig P so lets wait for the re formation and million dollar record deal that foolows :-). Good luck guys nice story.

If the bass player's still got that Hayman tell him I want it!