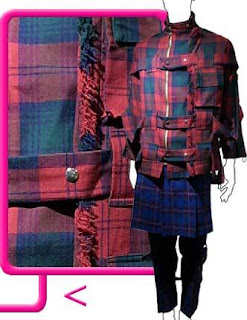 Back in the late 70's/early 80's, a near legendary punk outfitters called 'NASTY' was the place go in Southend for all your alternative clobber. It eventually closed, but the shop has re-opened (and subsequently closed again) dozens of times over the years under many different names, but never recapturing the glory of its heyday.

The shop has been empty for some time, but in December 2008 it re-opened its doors to once again offer the 'yoof' of Southend some alternative clothing (all be it in a more 'emo-friendly' kinda way). The name above the door is now 'Threads Atomic Dustbin', and I bet the new owners musta worked on that one for days! Mind you, I'm reckoning that the only people who will get the 'joke' will be in their 40's (Neds never really were a household name were they??!), the same people who will have little interest in 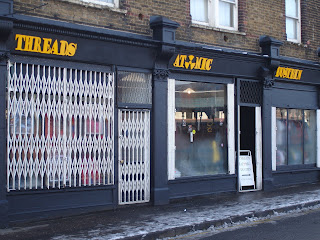 shopping there!! (I mean, do they even make those massive black flared jeans in 40+ waist size??!).

On discussing the name change with another former 80's goth-type in the office, we were sure we could come up with something even better. Since then, the text messages have been flying backwards and forwards, with the puns getting worse and worse as the days go by. Here are just some (the least worst!) of the rubbish we came up with....

We started off trying to think of more emo-friendly bands, like:

Then, being old buggers, we had to widen the criteria a bit...

Then, in desperation, it was just ANY type of shop!!

Oh you get the idea, and yes, these were some of the better ones!!! I therefore hand it over to you dear reader, to provide me with more (better??) band related shop names, come on, don't be shy!

There used to be a fabric shop near Petticoat Lane called (genuinely) Touching Cloth - off topic, but worth pop..

Adam and the Pants
Sex-padrilles
My Clothing Romance

Angling shop - Rod's Do It

And from the dairy: Primal Cream

ishould - there's no way i'm stopping you!! Some crackers there!! Sushi is pure genius!!

Furtheron - lets hope you pick up a new job soon, you're getting in to this!! ;-)

Mondo - Sex Pastilles i like a lot!! Didn't even get the fishing one till i finally said it out loud! quality!

Any more for any more??

Chav and Dave should go nicely down that neck of the woods Piley.

I have some Ned's Automic Dustbin by the way, two good tracks at best and the rest unlistenable sh*t. Lead singer had a ridiculous haircut !

Sushi and the Banshees that is total class , nice one :-). I'm not going to try my hand at this there is no way of topping that. Glad some one else thinks Neds Atomic Dustbin are shite , Kill Your Telly Vision is there one winner the rest CRAP !.

Ladies Lingerie
Madam and The Pants

And the toy shop - Toy Division

EFR/Carl - Yup, I remember NAD being total shite as well! Remember travelling down to the Reading festival one year and passed the band on the motorway... they had been pulled over by the police and the whole van was in the process of being searched! All their shit was on the kerbside, whilst they just stood around looking mighty fucked off!! I did see a bit of em at the festival, and on reflection, wish the police had taken em in for 3 days of questioning!

RM - hey you've put another spin on it! Like it!

Mondo - you been thinking about this all weekend aint ya?! Bleach Boys! Ha!

Only because I am too thick to do it the proper way!

Oh hell, there's some funny comments on this post !!

RM - rubbish, you were just giving it an extra slant!

Heff - glad you liked it!

Anon - ouch! They are getting worse!! yuo have made me think of another tho...