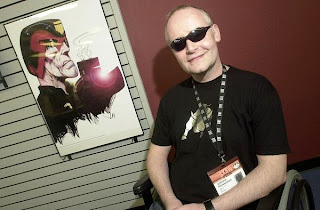 I was gutted to see in today's obituaries that John Hicklenton passed away last month (19th March). Not a household name by any means, but I'm sure comic lovers would recognise his art if not his name.
Born in Brighton on May 8 1967, John's life was changed forever when as a child he discovered the groundbreaking new English comic 2000AD. Just obtaining one issue was enough to make him decide he wanted to draw comics for a living. At art college, John got a lucky break, and ended up being sat next to a girl called Hannah Smith, who turned out to be the daughter of Judge Dredd artist Ron Smith (Ron is my all time favourite Dredd artist). He drew a picture of Dredd for Hannah, and her father saw it, and got him a job on the comic. Amongst other things he had spells drawing Future Shocks and Nemesis the Warlock in 2000AD. He also did stories for other British comics such as Crisis, Toxic and Deadline.
He finally got his ultimate gig in the early 90's when he became the artist for Judge Dredd in the characters own spin-off comic (The Judge Dredd Megazine). 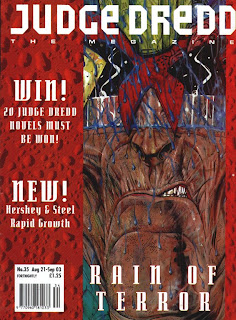 (one of Johnny's fab covers for the Megazine)

At the age of 28 John started to suffer from various aches and pains, but it wasn't until 2000 that he was diagnosed with multiple sclerosis (which he descibed as a "terrorist, medieval 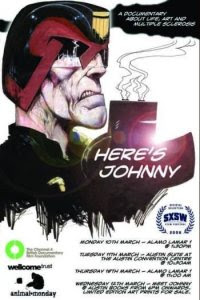 disease"). The cold way in which he was told haunted him for the rest of his life "The doctor, a locum, just stared at her computer screen and never once looking at me, she said 'You've got MS. You'll be dead in 12 to 15 years'". but he battled on, and never gave up his art. Indeed, it seemed to give him the strength to carry on "I haven't got MS when you are looking at my pictures. I haven't got MS when I am drawing them. I am getting out a lot of rage through the pen." His battle with MS was documented in a More4 film titled "Here's Johnny". It was filmed over 5 years and I was lucky enough to catch it when it was shown last year (and even still had it on my Sky+ box until in was replaced a few weeks back)... it was a very humbling experience.

John spent the last year of his life working on a graphic novel titled "One Hundred Months". Once this project was complete, he arranged to go to the Dignitas suicide clinic in Switzerland. This had always been the plan, in the documentary, John said "I'm not worried about losing my life, I'm worried about losing my demeanour, my mind, my interaction with life."

In his tribute to John, 2000AD founder Pat Mills called him "the Jimi Hendrix of comic artists. Easy viewing comic 'muzak' he's not. His grotesque images bear comparison with Gerald Scarfe and Ralph Steadman and are not for the squeamish." 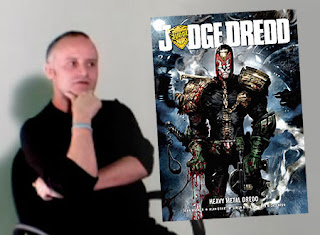 John was married, lived in Brighton, and was younger than me. He was a very brave and talented man. 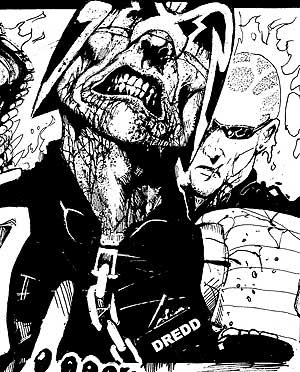 Here's Johnny is available on a very limited edition DVD (just 1000 copies made), you can find out more about it and view a trailer on the official site for the film here.

Damn. I start getting concerned when people MY AGE are dying.

Mondo - yeah, he deserves that... with all proceeds to MS would be a nice touch (Johnny was a big campaigner for the cause, and fought for better understanding and treatment right to the end).

Can't say I'm actually aware of him and his work but I remember reading this on teletext and thinking how sad it was. When you think of all the cretins there are in the world these days it seems a shame that someone with a genuine talent has to leave it so early. Just highlights yet again what a cruel place this world can be.

You're not wrong Martin... The thing is, life isn't fair - something we all learn to our cost as we grow up.

When people dies at the same age or younger than me, it really does give me a bolt. No guarentees eh?

What an incredible talent. It's cold comfort given his age and what he must have suffered, but that's an amazing body of work to have left behind as a legacy.

I watched “Heres Johnny” when it was aired, and became interested in his art & his story.
Fantastic artist! Such a shame, that he felt compelled to leave the world early…

ISBW - yes indeedy, he has left behind some wonderful work. His George Bush work is quite uncomfortable, but amazing all at the same time (I get the impression he wasn't much of a fan!).

If you follow the link to the Here's Johnny DVD, they are also selling limited edition prints - you can see 2 of his Bush pieces there.

Thanks Lil - It was a very interesting doc wasn't it? Be a nice touch in C4\More4 repeated it now as a tribute.

Sad- he was a lot younger than me... hmm makes you realise you shouldn't be so bloody grumpy.