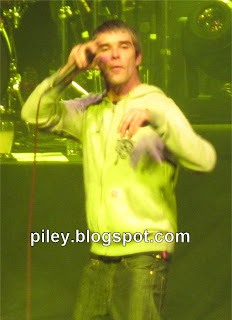 Another 'catch-up' live review from last year.... (we're nearly there I promise!)
Ian Brown. Live at the Cliffs Pavilion, Southend - 30th November 2009.
As quite a big Stone Roses fan (both at the time and still now), it's still a mystery to me as to why I've never got particularly excited about Ian Brown as a solo artist. I bought his first couple of albums and found them both... just OK to be honest.
For me something is missing, although I never could quite put my finger on it (actually I wouldn't mind betting that the all important missing ingredient was a certain Mr John Squire... and funny enough I've enjoyed all of his post Roses work).
For this gig Ian played a selection of songs from his 6 solo albums... a few that I recognised, and a large chunk that I didn't. It doesn't really matter though as I can't help but come to the conclusion that the ones I'm unfamiliar with sound very much like the ones I do know! It's an alright gig... Ian Brown isn't the most enigmatic artist (and certainly not the greatest singer!), and doesn't command the stage like some do... but he's stood the test of time, so I'm sure it must be me. 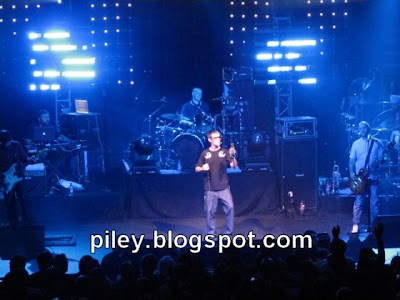 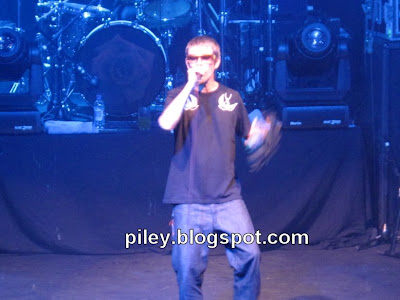 However the encore is my lasting memory of this gig. A truly fabulous rendition of Fools Gold (the only Roses track on offer all evening), along with another couple of tracks that I don't know... but are much better that the other tracks I didn't know!

This last 20 minutes or so redeems the whole evening for me, and I come out more impressed than I expected to be... even more so when one of my friends (who is a much bigger fan) informs me that the other encore tracks were all from his latest album. Well bugger me! There's life in the old dog yet!!
Piley

A few years ago I was speaking to Nick Terry who produced/mixed a couple of Ian Brown solo albums - apparently he's notoriously out of tune as a singer. They get round this by double tracking the vocals to cover any dodgy notes. But live, not so easy, and there's festival footage of Ian Brown pointing at the monitors as indicating they're faulty, when actually it's voice that's gone wonky.

Funnily enough, I was just listening to The Second Coming on the weekend for the first time in years - I don't know what came over me! Anyway, Mr C. was making some derisory comments about the LP beforehand so I imagined that it would be even worse than what I remembered. But it wasn't - it was much better!

I've never really got into his solo work. I think that one of the main reasons why is that for me, the Roses were for a moment a v. special band (with a brilliant guitarist!)and I want to leave it at that.

Mondo - It's almost his trademark now isn't it? If he was autotuned, people wouldn't know who it was!!

Cocktails - I bloomin love that album!! Always though it was so harshly judged at the time. Whatever they did was never going to be good enough as a follow up to the first album (in the eyes of the press anyway), but I loved the rockier feel to it - the singles off of it were fab! Did you ever try the Seahorses album? John Squire's first project after the roses? Soundwise it has the same feel to the Second coming, but a lot of people didn't like the the guys vocals (again, I didn't mind it!)

Hmmm, yes, I did have a listen to the Seahorses and it just wasn't for me - probably for the same reasons that I didn't get into Ian Browns solo work.

There are some top tracks on The Second Coming. I am particularly liking Tears and Breaking into Heaven at the moment. I'm going to annoy Mr C. with them a bit more this week I think...

Honestly never got The Stone Roses... I was probably too old. I've never got Ian Brown as a singer - as Mondo says he always has seemed too out of tune for me

I like The Seahorses - I know many didn't but that I really got, however it was a bit of a Pagefest in guitar playing terms I suppose and nothing that original.

Never heard of him.

Damn these blogs are educational !

Cocktails - I love Squire's work on SC and The Seahorses stuff. I always find SC a bit fresher to listen to these days as well, as I never OD'd on it as much as the first album. His 2 solo albums are worth a listen too.

Further - Ahh!! So YOU were the other person who liked them eh?! Good to meet you!!! Guess it was a bit of a Pagefest in places, but if that helped a younger generation discover Page, then that's no bad thing in my book!

Heff - don't think the Bar n Grill will miss Ian Brown from it's CD collection!! The above mentioned John Squire is a guitarist you may dig tho!

For me the Stone Roses were a perfect chance occurrence, with the sum so much greater than it's constituent parts, who encapsulated an musical era so beautifully that they should all just have faded obediently away like fireworks once their moment was done.

Instead Ian Brown has doggedly and tunelessly continued to lope around like an elderly gibbon, making a horrible noise. I've never seen him as anything other than utterly pointless. You showed amazing endurance in staying for the whole show.

It wasn't great but I have always liked the fact that Ian Brown's solo career, has been nothing like the sound you would have expected with the Stone Roses in mind.

I enjoyed the night, like the way he struts round the stage and I think his band are first class. I will admit it is an acquired taste but one I have grown to like quite a lot !

PS - I need to get you a copy of his greatest hits album. One of the tracks he played in his encore 'All Ablaze' is only available on this album.

ISBW - I agree with you on the Roses, and it's probably why i WANT to like IB more... It wasn't that hard work, I did find myself drifting at times, as one similar tune replaced another, but the end was good!

EFR - Yeah good point, his band were great. Oh yeah, up for that track then, ta!