The Missing Piece Of The Jigsaw! 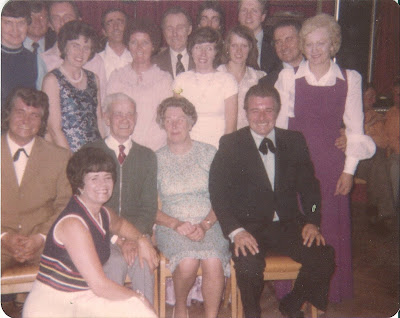 My dad is away at the moment, and I'm keeping an eye on his gaff.... When I popped round the other day I saw his box of old photographs and couldn't believe the one sitting right on top. Taken at a family party sometime in the latter part of the 1970's, it completes the saga of the Essex Brothers tapes a treat, as everyone involved is there!
Piley

Love it ! Nice to see your Mum and Dad there mate, may need a word with your Dad regarding the hair style, guess it went with the territory !

Thanks EF! Blimey, you must have good eyes to be copping a fair 'ol look at me dads barnet! He's right at the top left hand corner... not mistaking him for his tredier brother Don infront of my mum are you? (you've mistaken those two before!)

Err Piley I think I got it wrong again !!! Yes I have made that mistake again. Don't they look similar !!!!!

That's wonderful, P. Your uncles look EXACTLY how a pair of 1950's singing twins called Mick and Don should look. And not camera-shy, either.

What a happy picture.

What a great pic - there's a softness that's becom lost with digital clarity. Such a great snapshot of the time.

This is how the seventies were, not the Abbafication nonsense that gets pulled of the peg too often now

A fantastic and truly unbelievable photo, Piley. Are you sure you haven't knocked it up in PhotoShop? Everyone is there in one place!

And just who are the blurry couple sitting down in the background (on the far right).
Blow me, it's Stan and Ollie!

EF - Knew it!! I've never known my dad to have anything other than the haircut he has now!!! I reckon he was born with that side parting!

Thanks ISBW - It is a happy picture isn't it? Amazing that the whole of my fathers side is there - except for their mother who died when they were all still very young, Grandad eventually remarried and had another 2 kids... who are also in the picture!

I guess the only thing that starts to make this happy picture a little sad is seeing just how many of them are no longer with us.

Thats a great point Mondo, history seems to have reinvented the 70's and now trys to tell us what it looked like, it wasn't flash or sparkly was it?

Dave - I know, amazing, I'm not sure there was ever another full meeting like this again. It's also worth remembering that Aunt Winne (at the front) had come over from America for it too...

My brother has all the slides, my Dad never did prints, we had to endure these photo nights with the big screen all that... that came out of my Mum's place when she passed on. Sadly in his topsy turvy life of the last couple of years - divorce, move, long hours etc. he hasn't got around to digitizing them which was the plan.

I'd love to see some of them now.

Further - thanks. Well worth investing on one of those new gizmos where you feed in old negs or slides, press a button and hey presto, digital photos! I've used one, and it really is that easy and that quick! Great quality too.

What a great photo. Have to agree with ISBW that your uncles certainly look the part. If relatives keep finding recordings at this rate you'll have enough for the Greatest Hits box set for Christmas.

Great photo, the seventies was all about shades of brown and purple. A good seventies photo should always have rounded off corners too.

This is a lovely photo mate. Nice way to round off the story.

what a find. that really is spectacular. i wish i had uncles who looked like that. it's the ties. i love those little ties. bring em back.
x

Hi Coop, yeah spot on, it's got to be an almost square photo with rounded edges hasn't it?! Oddly there seems to be so many different shapes and sizes to photos from that era, although not sure why!

Hi Ally, and thanks! Yeah, loce a bit of those ties myself too... I think Mondo is the ideal candidate to get em back into fashion!

As Ally said, the ties look great. And I do have uncles who look like that, guess I'll buy them some ties for Christmas. Or maybe sooner

Bless you joanna, and thanks for dropping by! Look forward to seeing a piccy of your uncles complete with snazzy ties!