Here's another one of my belated live reviews:

Motorhead, The Damned and Girlschool. Live at the Cliffs Pavilion, Southend - 24th November 2009.

Concerts are like buses sometimes... I'd had nothing for ages and then four of the buggers came along in one month. This was number 3 of my November gig-fest, and to be honest was one that I didn't really expect to be going to... Y'see, the News that Motorhead were playing in my home town had been announced several months before I purchased a ticket. But it wasn't until The Damned wee announced as the support that I all of a sudden became interested!
Some gigs can be better than you expected, others can be a disappointment. This one however panned out pretty much exactly as I expected... 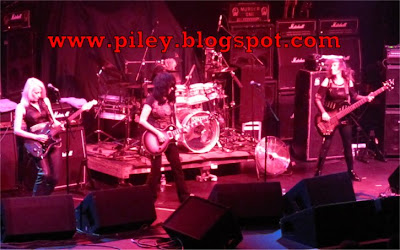 There used to be an old adage about giving the support act a shit soundcheck so that the main band would sound that much better. That ploy was certainly in evidence on this night, and the sound quality for Girlschool was nothing short of rotten! The lead guitarist was so low in the mix that you couldn't even hear her (how can that happen these days?), and I have to say I felt a tad sorry her, as she was obviously oblivious to the fact that she was completely inaudible... She was giving it her all whilst covering every page of the book of rock guitar hero poses and face actions. Bless. Despite the weedy mix, the gals go down pretty well and exit to very generous applause. 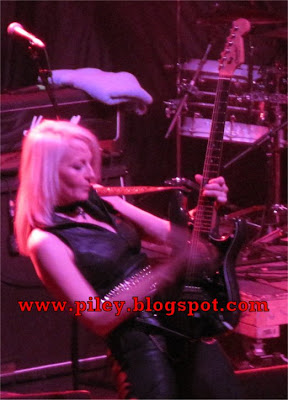 Next up are the Damned... and the only reason I'm here really. It's over twenty years since they last played this venue (1985 and 1986 - I was at both), although lead singer Dave Vanian is the only member of today's line up that was present back then. 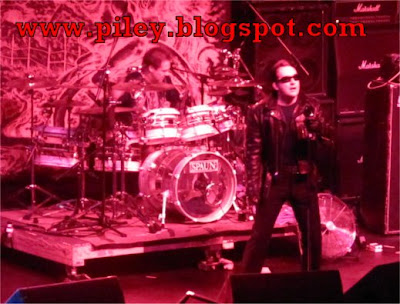 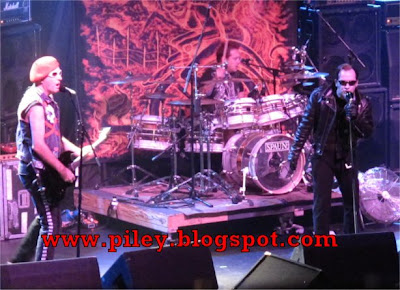 Their set is perhaps a little more one dimensional than when they headline, but it's completely understandable. They are, on the whole, not playing to their own audience on this tour, so have tailored the songs to suit a Motorhead audience... i.e. all the 100mph noisy ones! (New Rose, Neat Neat Neat, Looking At You, Love Song, Smash It Up etc etc). But to their credit they do still manage to slip in a couple of slower treats in the shape of 'Under the Wheels' from the latest album, and amazingly 13th Floor Vendetta from the Black Album. 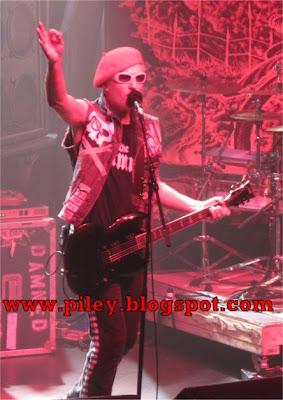 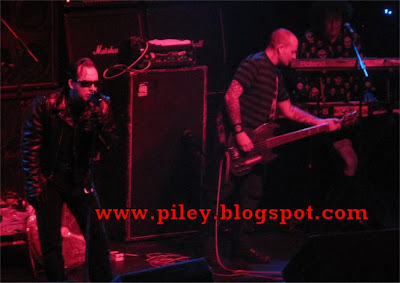 As I've mentioned in a previous live review, this line-up of the Damned is quality. The Captain and Vanian steal the show (as always) but the input from Pinch (drums), Monty (keyboards) and Stu (bass) should not be underestimated. It's great to see them perform on a larger stage than they often get the chance to these days, and it gives Vanian a chance to prowl the boards like a tiger stalking its prey. Again, the set is marred by a poor mix and almost non-existent lighting, but the band themselves are mesmerising. 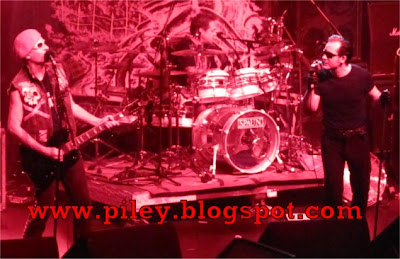 Motorhead are exactly what I expected... ridiculously loud (even with ear-plugs, my lug-oles are ringing for almost the next 48 hours). 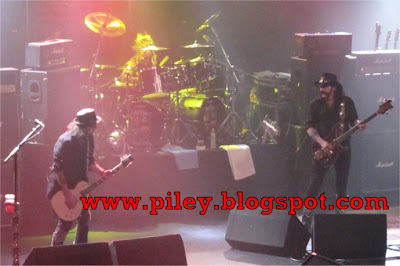 For someone who I have always found to be such a great and unique character, I'm surprised at the lack of stage charisma emanating from Lemmy Kilmister. Other than actually walking on stage (and walking off again at the end!) the guy literally doesn't move for 90 minutes! He's like a waxwork dummy (although admittedly one that plays a pretty mean bass!), but then I guess he is an OAP these days, so I shouldn't really complain. 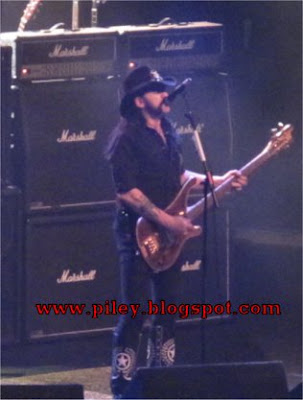 However, I do find the first few songs immensely enjoyable.... then the next few songs were OK... then the next few songs sounded like the last few songs..... and then I started to drift a little. After 45 minutes I actually popped off to finally bag the beers I'd attempted (and failed) to get on 3 separate occasions earlier in the proceedings. Oddly the bar wasn't as deserted as I was expecting it to be, and even more oddly there were big hairy fellas in Motorhead t-shirts propping up the bar having a chat... Are Motorhead a little samey even for the converted these days? 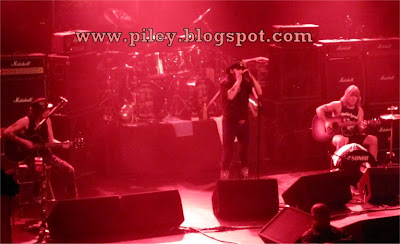 One of the highlights for me was when the band come out for the encore and play an acoustic number, Whorehouse Blues (I think!). This grabbed my attention once more, and the change in pace and noise was most welcome. But it was short-lived, and we were back to the more traditional sound (and speed!) with the very next song. If you're not particularly a Motorhead fan then, like me, you are likely to only know 3 of their songs, and predictably, we had to wait until the end for the pay-off of Bomber, Ace of Spades and Overkill (Ace of Spades was a cracker though!). 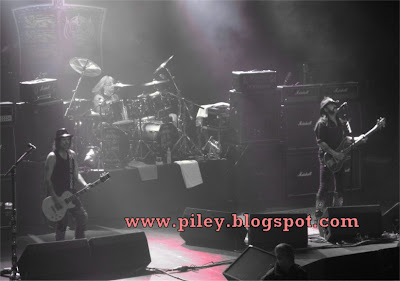 The two other members of Motorhead are great value for money, and are actually much more interesting to watch than Lemmy. They smack a little of 80's ROCKKKK cliches (with haircuts to match), but it's good entertaining fun.

Over the next few weeks I bump into literally dozens of people who were at this gig (at least 6 from my office were in attendance). The one thing I heard time and time again was how impressed people were with the Damned. In fact, even a couple who went along only for Motorhead came away thinking the Damned were better.
I'm glad I finally got to see Motorhead, although I'm guessing I probably should have seen them a few years earlier for best results....
Piley

Girlschool look pretty hot from a distance.
I would...

Think you've nailed it P. I saw Motorhead at the Cliffs 20 years ago, they were nowhere near as static. The Damned were on top form weren't they - I don't think I've seen a bad Damned gig actually.

PS watch out for my Rat interview this week.

The Lemmister is always a class act - can't be beaten.

Hi Ist... erm, what can i say?! Certainly new-ish addition Jackie Chambers (She of rock guitar poses and silent guitar!) is a welcome addition... moving on...

Mondo - You are right, the Damned always seem to pull it out the bag, still sound fresh and into what they do. In some ways the continual change of band members may have helped to keep them fresh.

Further - I'd like to see a bit more movement from the fella, but yeah he can certainly play!

We usually see Motorhead once a year, but didn't go this time around... howeverI was very struck LAST time by the sight of Lemmy's side-profile on the one occasion when he turned round. Despite his skinny frame, the man's got such a disproportionally fat arse that sideways on he looks like he's wearing a Pamper. Could this be the reason he doesn't move round so much? And could he REALLY, ACTUALLY, be wearing a Pamper?

I must get down to Specsavers, Piley. It looked like you'd written Motorhead and acoustic in the same sentence.

I thought it was a great night with 3 good bands on the bill. Didn't see all of Girlschool but was impressed with what I did see, even without the lead guitar. Last saw them at Chelmsford Odeon at least 20 years ago. Hadn't seem the Damned before so wasn't too sure what to expect but found I liked a lot of the stuff they did. Got the feeling the keyboard player may have had one too many expressos though. I've always had a soft spot for Lemmy and Motorhead. Given that Lemmy's now in his 60s I think he can be excused for not moving round too much on stage. Have to agree with you though, the acoustic 'Whorehouse Blues' with lemmy on the ol' harmonica is a real winner.

ISBW - Every year??!! An you still both have your hearing??! amazing!! Didn't spot the pamper-arse no... will dig out the rest of my pics now and see if I caught it at all! With a 2 year old charging round the place, I know the look well!

John - Haha! Yup, you read it right, and there was a piccy there to prove it too! It was only for one song, after which normal service was resumed!

Martin - Yes, 'ol Monty does get a bit excited doesnt he?!! He was just the same when I saw the Damned earlier in the year!

As for Lemmy, I take it all back... the combination of being in your 60s AND wearing a Pamper would of course restict anyones movement... he did well just getting on stage!

the damned and motorhead- nuff said;
the real question.... were girlschool fuckable?

Give Lemmy a F'in break, man !

I enjoyed this gig a lot. I love Motorhead (especially the Fast Eddie era) and i'm a huge Damned fan too. I also love Girlshool's first album too. So i was chuffed three bands i like that i'd seen before and i got in free too NICE !. I thought Girlschool played well and from where i was they sounded ok and i could hear the lead work too. The Damned were great , like you P i was there at those two shows many moons back. 13th Floor Vendetta sounded class. Great set but too short. Motorhead are going to sound samey if you don't know much stuff. Every on i know who went to see the Damned said the same thing. This complaint gets levelled at heavy rock bands alot out side of us , the faithful. I loved it , i was pissed and yeah i finally took my baseball cap off and banged my fucking head like a 17 year old lol. I have to say though that the sound got to a ridiculous level , just total distortion late on. A little more light and shade may have benefitted the set but this is Motorhead and i aint complaining. They do sort the men from the boys lol. Lemmy is old mate , he used to be much more mobile on stage , i too saw em 20 odd years back too. The man is a hero , the real deal , cut him open and it would say Rock N Roll right though the middle of him. It was like being 17 again , except we are all fatter our hair is thinning and going grey. Totally deaf next day lol.

Nazz - How much can you drink in an evening??!

Heff - I gave him a break dude, honest!!

Hi Carl - I know what you mean fella. When you are into a band, the songs really dont sound the same at all (hell, i'm into Sigue Sigue Sputnik so I should know!). If you are a casual fan then it can come over a bit samey.

I was upstairs chap, and the sound was lousy.