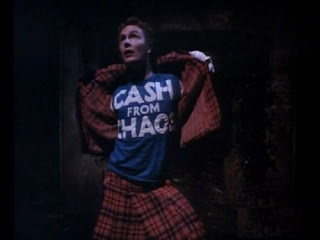 Everyone has got a view on how big (or little) Malcolm McLaren's influence was on Punk. The man himself would have told you he created the whole thing, lock, stock and barrel. Lydon on the other hand will tell you he did almost nothing. Malcolm certainly made the most of it (whatever 'it' was), and had a reputation for being somewhat 'inconsistent' when retelling his story too. I'm guessing that somewhere between the two is probably more likely. However I don't think anyone can doubt that the Punk scene would have been a duller place without him. But I'm not here to debate that one - the rest of the net already seems to be doing that....

A few years back I read an article about what was at that time, the upcoming Ian Curtis biopic (if I remember rightly, casting had not even finished at that point). The article went on to say that a fabulous soundtrack was being built up for the movie, but particular praise was singled out for a bootleg remix that Malcolm McLaren had done for the project. The 'mashup' threw together Joy Division's 'Love Will Tear Us Apart', and Captain and Tennille's 'Love Will Keep Us Together'.... the bastardised output being titled 'Love Will Keep Us Apart'. The article must have spent a good paragraph or two saying just how great the track was.
From that moment on I was desperate to hear it, I was intrigued at how he could have made these two so very different songs sit together as one. I frequently Googled it, but never with any success. The film (and Soundtrack album) came and went, and I never again heard any mention of Malcolm's mix. But I was still curious to hear it and never quite gave up the search.
In 2009, whilst involved with something completely unrelated, I came across what appeared to be a legit personal e-mail address for Malcolm McLaren. I thought about it for a few days, and eventually decided to drop him a line about that elusive track. What's the worst that can happen I thought, he'll almost certainly ignore it anyway... Incredibly, the next day I got a reply from the man himself, and not only that, he gave me a link to download the mix too!
Unfortunately, this story doesn't quite finish on the high I had hoped for. After all that time and effort, I was actually quite disappointed by the track. I found the mix a little stodgy, and personally I didn't think it went anywhere. It was a mediocre bootleg remix at best (pretty much anything by Go-Home Productions is a far superior effort), and it made me wonder what on earth that original reviewer had seen in it in the first place. Perhaps they were blissfully unaware of the Bootleg remix phenomenon, and this was the first time they had ever heard two records fused together in such a way, so were 'blown away' by the idea, without realising it wasn't a particularly good example of a Mashup.
Still, I was very grateful to 'ol Malc (and I of course politely thanked him for his trouble without mentioning my disappointment!) and was at least relieved to have finally tracked down this tune and satisfied my curiosity. It never did get a release... Perhaps they couldn't get clearance to use one (or both) of the tracks, or maybe someone finally twigged that it actually wasn't all that good after all.
Nevertheless, this track is still a small part of his legacy, and probably one part of his career that isn't being dissected to the nth degree at this moment in time. So for what it's worth, here is that unreleased bootleg remix that Uncle Malcolm kindly sent to me, see what YOU think of it, was it just me or was it the hidden gem that some obviously thought it was?:

Oh and whilst we are at it, I cant finish a post on Malcolm Mclaren without posting his very own version of that Max Bygraves favourite 'You Need Hands', taken from the Great Rock 'n' Roll Swindle album! 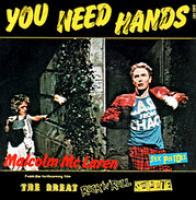 Thanks Malcolm, you certainly made the world a more interesting place.
Piley

Glen Matlock was on Final Word this afternoon. He debunked the myth that McLaren invented punk. He summed it up well, I thought, when he said Malcolm owned the pond that everyone threw stones in - and looked to see where the ripples went. Well, it was Radio 4.

I'm not a fan of Punk AT ALL, but I DO respect your enthusiasm and interest toward the genre, lol !

I love Sex Pistols (there is no THE before thier name). I've always had mixed feelings , mainly negative ones about McLaren. I think he was like many "rock entrepreneurs / managers , a bullshitter with penchant for self agrandizement. He has tried to take far too much credit and money from the whole Pistols saga. He didn't write the songs , he didn't play the gigs, he just played a bit part in bringing them together. Watch the Classic Album DVD of Never Mind The Bollocks and watch him trip him self up at every turn as he say's one thing the band say another.

Nice piece though P , and nice that he contacted you back. I don't / didn't wish illness and death on him but i have very little time for the man. I'm sure this will go down really badly with your readers but hey like them Pistols i don't caaaaaarrre lol.

The remix, it has to be said..is truly horrendous isn't it. Speed it up, chop it in half and throw in some anarchy and it may just be a winner???
I read that his last words were 'free Leonard Peltier' which I thought was quite profound...
until I went on to read it was written on his sons half brothers t-shirt!

He didn't invent punk, but he certainly advanced (or retarded) it's growth. Without the sense of outrageousness that Malcolm promoted and orchestrated, perhaps The Ramones would have been the biggest band ever. Punk Rock as a genre died commercially when the Pistols performed their "antics"... it became a political/fashion/social construct rather than a musical genre.

John - Sounds like a pretty decent description. Malcolm certainly always made out the Pistols were his puppets, but only he really believed that.

Heff - and I respect your enthusiasm and interest in combo platters, quality dark beers and shirts!

Carl - I doubt many would disagree with you to be honest, the man made the most of what he did, but the majority saw through his 'over-egging'. He was a great character though, I'll always give him that.

JnT - yeah, pretty dire isn't it?? what was he thinking??!! He managed to ruin BOTH songs!

It would be great to utter some profound last words wouldn't it?! Sounds like Malc almost got away with it there!! I'll probably end up with "ohhh, I keep thinking it's Tuesday..."

Nazz - Interesting point, particularly the Ramones bit, never thought of it like that. Gotta love a bit of Ramones too eh??

Quite a dire mash-up. Perhaps that journo was "persuaded" to be positive about it. Who knows?
Malcolm was a colourful character, especially when he wore that tartan suit to match his hair...
;-p

Mmm, this track doesn't quite work for me either. It sounds more like a lame-arse version of David Sylvian's Forbidden Colours then anything else. Or maybe that's just me...

Anyway, I'm impressed by the fact that he replied to you. That at least says something about the more generous side of the man I guess.

Hello Piley - been meaning to comment on loads of your stuff (I'm still a regular reader) but it just never seems to happen despite the fact that curiously plenty of your interests and views mirror mine.

As for Malcolm McLaren, well I do suspect that as Carl said he was the
master of self-myth making (ie a bullshitter) but I thought he was a
fascinating chap. Whenever he had anything to say I always listened and loved his gentle, soft voice and intelligent way of presenting himself. As an ideas man who made things happen he was second to none in my book, a real innovator. So what if sometimes the truth got a bit distorted, as a storymaker and creative force sometimes the truth is just a necessary casualty of
that process. The Pistols wouldn't have been the same without him - and despite doing his best to thwart him neither would Adam Ant (although I wasn't a fan of the way Malcolm treated him in the end, but still I guess that's what business is about and Adam didn't come out
of it too badly!).

I just wish the world had seen more of his ideas, thoughts and innovations in the past few decades.

As for the remix? Well, its a bit of stinker isn't it! If I remember correctly Malcolm also did the lead track from 'Carry on Columbus' - proof that even great people sometimes get it wrong!

Remix - not good. Like you said Piley goes nowhere. An excuse to mess with titling.

Ist - yeah good point, amazing how many toons can sound so much better after a few free green ones! Gotta love that tartan suit!!

Hey, anyone remember the 80's/90's Pistold tribute act "The Scotish Sex Pistols"?? The line up was Johnny McRotten, Stevee McJones etc etc. However the best bit was their manager - Malcolm McMcLaren! (true!)

Coctails - Well if nothing else, at least I feel vindicated, EVERYONE hated it!! I was shocked when he replied, so yeah, got to respect him for that (no fivers to get me to like it tho!)

Hi John - good to hear from you, glad to hear you are still hanging in there with all my 'ol waffle! Some good points there, and lets not forget Bow Wow Wow (complete with all those Ants that Malc nicked off of Adam!).

Warble - thats a good point actually, I bet he came up with that killer hybrid title, then set to work to try and create something to go with it... still crap tho ;-)