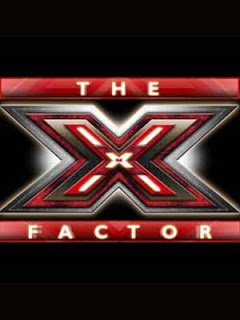 As a genuine music fan, i have religiously avoided talent programmes like Pop Idol, Fame Academy, Popstars etc for years. I assumed they were all full of nauseating teenagers, all with heads stuck firmly up their own arses, thinking they were gods gift. Not my idea of fun. Then 3 years ago I somehow stumbled on an episode of the X-Factor, and was actually quite surprised... yes, it was indeed full of those 'up their own arse' teens, but what I didn't expect was the humiliation that was dished out on so many of them! It's the modern day equivalent of the stocks, where chump after chump roll in, only to have verbal tomatoes and rotten fruit thrown in their faces. Surely there can be no finer TV than watching arsey teenagers getting knocked down a peg or ten??!

Since then, I've watched half of every series that has followed. I say half, because it's only the auditions that make good sport. Once you get into the live show, the fun stops, and the terrible karaoke show begins.

From what I understand, 99.9% of the hopefuls never see Simon Cowell and Co. There are literally hundreds of judges sifting through them first, weeding out the mediocre... so the only ones who make it through to see the 'celeb' judges are either really good, or really shit (I'm assuming they don't tell the contestent which category they have been put in, but I guess most of the deluded naturally assume they have been picked because they are 'amazing'). But as much as I love watching the bad auditions, there are always a few that make me feel a little TOO uncomfortable... I don't know how to put it tactfully, but lets just say, some of those who turn up may not be quite the full ticket. A cocky teenager is one thing, but publicly humiliating someone who may not fully appreciate they are being ridiculed feels a bit low and nasty.

Take 43 year old pizza delivery man, Alan Penfold from tonights show (the last of the audition episodes). I could be wrong, but you can almost see the lead up to this one... I imagine people have been sniggering at his singing and dancing for years, whilst telling him how good he is, and how he really should apply for the show... I mean, it IS funny, but should we really be laughing? Does TV consider this sort of humiliation as 'fair game' these days? or am I just being too sensitive??

Last year it was Emma Chawner that had me squirming on the sofa. The programme managed to make fools out of the whole family on this one, and oh, isn't that the theme tune to 'The Flumps' backing up the arrival of this rather portly family?! I kid you not! Watch it to the end if you can, to see the family barge into the audition room to challenge Simon Cowell... Uncomfortable is the word.

The year before it was Robert Unwin, a chicken factory worker, who no doubt couldn't quite work out why he became a laughing stock....

As they say in the business..... That's Entertainment!

Yes, Mrs. Axe came in to see me after watching last nights episode and she couldn't stop luaghing. I really don't find it that funny, but the ridicule of idiots has been going on through the ages so I suppose it's nothing new. I can't even bring myself to watch the clips you posted Piley. I feel evey ounce of their pain. Imagine how defiled you would feel (if you had the brians to figure it out) after being publicly humiliated in front of millions of prime time TV viewers. Worse still by that fuckwit Simon Cowell and co. People seem to be so desperate to get on this show. I just don't understand why. Does anybody have a theory?

There's something I've always found uncomfortable about this new style of 'talent' show - It's like The Gong Show and that yukky bit from Channel 4s The Word - but trying to be New Faces. And what a committee of nit-wits, managers who thinks of music as a marketing device and second rate pop stars who wouldn't know a tune if they tripped over it.

The other thing with these show is it's all about the race not the rider, so once it's finished no one really cares about the winner.

Out of all the years these things have been running what turn has actually endured long term ? Errrr...Will Young, and that's it! - Great - thanks for that X Factor

I read ben Elton's book, 'Chart Throb' which just about summed it all up for me. I've never been able to look at it in the same light since. I'd make a point of watching the episode where someone finally decks that smug bastard Cowell though, if it should ever happen.

Sorry, I love watching people get humiliated -its great TV.

Haven't caught much of this X Factor but I loved Britains's Got Talent.

And on the plus side I just got the new brochure from the Cliffs Pavillion and guess who's playing - Silvery, The Stranglers, Morissey and even The Jam are getting back together to perform in the Maritime Room. Actually only one of those is true :) Oh shit its The Stranglers :(

I've never watched a second of the X factor and never will and like axe i cant even bring my self to watch the clips you have put on P. I just think all this reality TV / competition TV is absolute horse shit. I only watched I'm A Celebrity Get Me Out Of Here when Johnny Lydon was on (and he was fuckin great). Once upon a time you had to graft to get some where now you just have to impress that no talent , no dress sense , no fucking idea what day it is arse hole S*mon C*well. I'd twat the fucker i really would. I'd give the big money and the record contract to the mad ones and have the others painfully destroyed (along with the judges especialy that sexless bitch Sharon Osbourne). My theory axe is simple they are knobbers plain and simple. Carl.

some great comments there, cheers everyone. It's car crash tv, that's for sure. I can't deny I don't enjoy seeing some of the arses on that programme getting a few home truths, but feel very uncomfortable about the ones who seem less able to look out for themselves.

As for the talent show propper... 'horse shit' captures it pretty well Carl! And as Mondo says, for what? a month after the winner in announced, nobody will care. But no doubt Simon Cowell's bank balance will have another few million in it by then, and perhaps THAT is the real 'point' of the show?

I'm in complete agreement about the very public humiliation heaped upon some of the unsuspecting individuals who audition for X-Factor. The girl with the unfortunate voice and large dress really made unpleasant viewing. The girl had clearly been set up for a dramatic fall in front of the likes of Simon Cowell and millions of viewers. For me, X-Factor stopped being funny at that point.

One thing though, Piley. Am I the only person who cannot actually hear anything when I click on these video clips?

Hey P. Thanks for stopping by the 'couch'. I'm becoming worried that I will end up being just as profuse but on my band's blog instead, which shuldn't be a problem seeing as those boys hardly ever make a post, but that's entirely my point etc. Glad you stopped by mate. Say hello to Dave for me.

anon - i've just tried them again, and all 3 have sound. Check ya system volume control??

Must be a record Piley all these posts. Well - it only lasted three days before the swinging started. Bloody drummers...