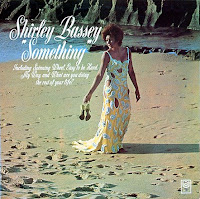 Not dropped a 'Cheesy Choonsday' in for a while, so I'm bringing it back with two of my all time personal favourites from the archives here at Piley Towers.

The late sixties early 70s was a funny old time for your 'traditional' artists. Having breezed through the 50's and 60's with their tried and tested act, many easy listening stars suddenly found themselves looking a bit 'square' (dad-io!). In an incredible attempt to make them look hip and trendy, many started recording up-tempo modern covers, to try and appeal to a new generation of music fans. I'm not sure how well these albums were received at the time, I'm assuming the 'kids' didn't go for it, and it's likely they also didn't go down well with their older generation fans. However, time is a wonderful thing, and if they didn't hit the spot at the time, many of these albums, rich in Hammond organs and funky guitars, sound really cool now....
The 1970 Shirley Bassey album 'Something' is a real gem from that time, famed for her classic 'Light My Fire' cover. But for me, her cover of 'Spinning Wheel' will always be the highlight. 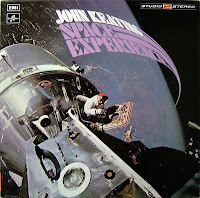 John Keating's funk-tastic cover of 'Jesus Christ Superstar' (from his 1972 Moog 'Space Experience' album), is probably the track I associate most with the mid 90's cheesy listening scene. I still snigger a bit now, to think that this was one of the 'big guns' to pull out when the evening was in full swing! A guaranteed floor filler, but brave is the DJ who queues this record from the start... although i really like the atmospheric intro, one minute in was the usual spot to unleash this baby, so don't turn it off too early!
Piley

These are both beaut's - always loved both of these big beaters - Tom Jones cracked out a few wallopers around this time Venus, Sugar Sugar and Check out the This Is Tom Jones DVDS of his 60s shows - packed full of nugg's

I've also got a couple of winners from Mel Torme and Peggy Lee in the vaults, which I'll post up at some point.

cheers mondo, that SD Jr clip is a stroke of genius!!

heff - not sure if you are complementing it (some pretty shit) or slaggin it (pretty shit!), but thanks for stoppin by for a listen! I don't expect them to make the Butlik set list anytime soon!!

I'm with Heff, you just can't leave alone that cheesy Tom Tit can you Piley ?!

Two classics Mr P. Good on yer. I love the Big Shirl track and remember many a happy night of shoe shuffling to it.

I still like a listen to my collection of cheese. It may be laughed at now but there were some real gems tucked away in the genre.

Ol Shirl was one "older/established" artist that didn't need to look hip and trendy when I was a kid. Even as a gangly yoof I saw her as a top artist.

Piley, any examples of that happenning now?

nice to see ya back Warble!! I think things have changed so much these days, and nobody is really pigeon-holed like they used to be. I guess the nearest thing these days would be something like the last 2 Paul Anka albums, where he was doing swing versions of Van Halen, Nirvana etc. But even then, the 'sound' of his albums is still the same, not the wholesale changes that Shirl, Frank, Peggy Lee etc went to to try and be 'hip' again.