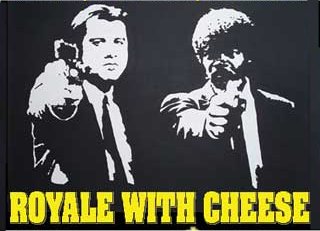 I know it sounds like a joke (I certainly thought it was one initially), but incredibly, long-time 'Start The Revolution Without Me' favourite, Richard Cheese has got the big wedding reception gig this Friday! Really! Who'd have imagined that Kate n' Wills were 'down with the Dickster'?
Apparently it all started with a tip off from a friend of Wills, and now Richard Cheese and Lounge Against The Machine will perform a set of their swankified versions of Rap, Metal and other inappropriate tunes at Buckingham Palace! They go on at around 12.30pm, just after the happy (?) couple arrive from the ceremony. The band have even been invited to stay at Buck House overnight... in a suite used for visiting dignitaries!

Which all leads rather nicely to Podrophenia 15... which will be here in just a few hours time....

RC: Welcome to the Jungle


Actually, you've got to give credit to someone who can make the below track vaguely listenable! Simply awful.... Slipknot: People=Sh!t

The only piece of news about the Royal We***ng that's made me sit up and take notice. He probably thinks he's booked Richard Stilgoe.

I know, I know, I should edit the Daily Express! An odd selection though isn't it? Good luck to him.

And yes, I'm half expecting it to be a case of mistaken identity too!