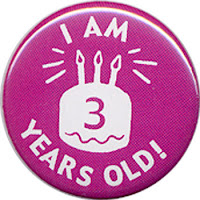 I was chuffed when I reached a years blogging... I was obviously speechless when I made it to two years as I didn't blog it (well, actually I didn't realise until a few weeks after), but today is the third birthday of 'Start The Revolution Without Me'.
I wouldn't have put much money on me surviving 3 years, but have to say I'm still as enthusiastic as ever, and have genuinely enjoyed putting my old stuff and nonsense up on here. And as a bonus, I've met some great bloggin' buddies along the way too - quite literally this year, having attended a blog hook up in London at the beginning of the year.
When I started the blog I was adamant that it would be completely random, just writing about anything I fancied at that moment in time. But looking back over the three years, there are some very obvious themes running through the 186 posts to date... Music, Comics, Books, Films, Local History, Gigging, Becoming a Dad, Sightseeing and Bettie Page! And although I've always steered clear of making this a 'me, me, me' blog, I guess those themes are actually a fair representation of me as a person. Looking over these posts, it's actually a pretty good document of what's been going on in my life during that time, plotting events, days out, shows, holidays and general things I was obviously buzzin' on at that moment in time.... things that I may have even forgotten about had I not blogged it. Maybe one day my son might read through some of these posts, and perhaps it will give him an idea of what made his old man tick.
Thanks to everyone who bothers to read, and extra thanks to those who bother to comment, much appreciated...
Piley

I think I've been blogging overall longer than you (2004), but not under the same webby addy, and image.

Oh, and BTW - WE WON THE HORSE RACE AGAIN TONIGHT !!

Afraid I can't offer you anything as exciting as Heff, but could manage a middle-aged moob at a push.

Thanks Heff.... boy, you yanks sure know how to celebrate!!! That horse is INCREDIBLE! I'll wager a dollar on it myself in the next race!

You obviously put alot of time and effort into your blogs...so much research! that alone deserves a big congrat's.
Hope you equally enjoy the next 3 years.

Many happy returns Piley! Your page remains a cracking read....long may it continue - why not celebrate your anniversary with a Boys Wonder post including perhaps an interview with Ben or Scott?!

Excellent output Piley - from the early singles through to the later concept albums, you've proven you're not a one hit wonder. Have one on me tonight.

The three J's, Jacqui, John and John!! Thanks guys, much appreciated.

JJ - it can be rather time consuming sometimes, but am still really enjoying it.

JD - that Boys Wonder post will happen one day! Its funny just how many of the 'obvious' posts I planned when starting up the blog, still remain unwritten.

JM - bless you Sir... Although I'm sure I've dropped the odd dodgy 8-track or flexi disc in here and there!

Congratulations Piley. It is a pleasure to read your blog - I always know its going to be a quality read.

One complaint though - you are costing me too much money. I have a growing collection of graphic novels and I blame you entirely!

Congratulations and felicitations on your survial. Having taken 5 years off after running mine since 2002 I know it can be a pain thinking what to write. Keep up the goodness.

Cocktails - whoops, sorry about those graphics! I hope a couple were at least vaguely readable... (gulp!) Did you ever risk a peep at The Arrival?

Simon, thats kind of you, thanks. I do find myself keeping half an eye open for potential bloggery these days... Amazing what you can shoehorn in at times!

Congrats !. How about more post's on crochet and ming china ;-). Still a good read , though i'd like to see more music post's on past bands !!!!!. Weldone P.

Congratulations, can't believe it's been 3 years. It's always been an educational/interesting read even if, like cocktails, it's cost me a fortune in dvds, books and cds. All well worth it though.

Thanks Carl - Although I did do a post on the Ink Spots a year or two ago. That 'past' enough??!

Martin - Likewise, sorry about the wallet. Hope you havn't make too many duff purchases as a result.