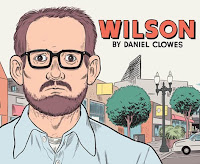 Well, true to their word, to help make amends for my disastrous day last Monday, those good people at Gosh! did indeed send me a complimentary signed copy of the new Dan Clowes graphic novel 'Wilson' (as well as a few gift vouchers too). So although I never got to meet the man, I did at least get my personalised copy of the new book. Thanks Gosh!
I have to say that it was worth the six year wait for this new Clowes book. It is beautifully done, and right up there with some of his very best work. The book has been designed a bit like a classic old annual from when you were a kid.... it's the same size, and has the same kind of feel. At first flick, even the content looks like an old annual too, as it appears to be full of one page stories. Clowes has cleverly changed his style of art on each page too, to give the impression of completely unrelated strips. Indeed, initially the strips even read as 'one-pagers', as we lurch from one pun to the next. But as you read on, the funny one-liners start to dry up a little, and it all starts to get a little more serious. At this point all the previous pages rather cleverly start to entwine and tell the story of Wilson. 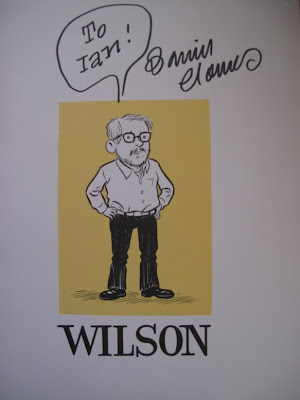 waddya mean you really thought my name was Piley???!
Wilson is a complex character, he really seems to believe that he is a happy-go-lucky people 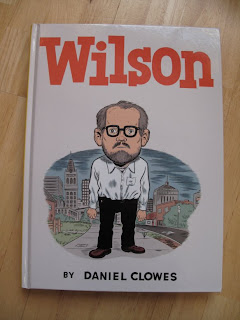 person, and is oblivious to the fact that he isn't.... This is despite his continual disastrous attempts at striking up conversation and small talk with strangers, who he always seems to end up offending. He's not a particularly likeable character, he's a loner, and rather too opinionated for his own good. As the story moves on you dig deeper and deeper, finding out more and more about him and what makes him tick. And despite not liking him very much, there are moments when your heart aches for the man... a scene where he is desperately trying to strike up a relationship via a webcam with the grandson he never knew he had is heart wrenching... the last panel of that page still haunts me!
But characterisation is where Clowes is better than just about anyone else in the game... and his ability to create complicated, dysfunctional, and above all, believable individuals of such incredible depth remains impressive. As this mans world twists, turns and unravels, you are exposed to yet more of his layers. I almost felt like his psychoanalyst by the end of it! 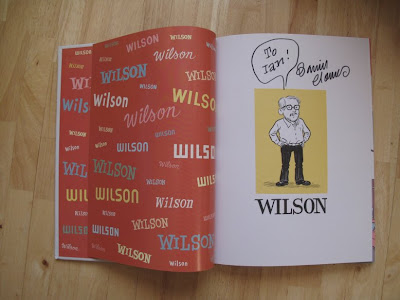 I don't want to give any of the story away (which makes reviewing it kind of tricky!), but safe to say it's touching, disturbing, riveting, intelligent, laugh-out-loud funny and compulsive reading. The quality of the story is even matched by the book itself - It's beautifully designed, and I don't think I've ever seen such luxurious, thick paper stock used in a book like this before.

If you've enjoyed Clowes classics such as David Boring and Ghost World, then you are in for a treat with this. If you've never read any of his titles before, then Wilson is the perfect introduction to his world. 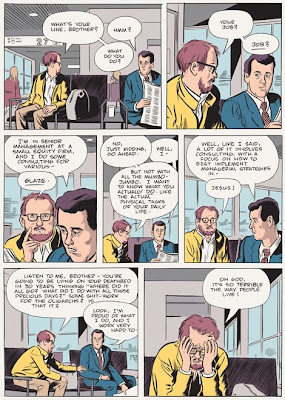 I tried Ghost World, but didn't get it. Wilson was much more like it readable, punchy and some great one liners. S'cuse the shameless plug but you can catch my review of Wilson here

Glad it all came good after your mate's dodgy tip off

My appologies to you AND Mrs. Piley, lol !

Is the humour in Wilson anything like Larry David's Curb Your Enthusiasm? If so, I would definitely be tempted.

I've never read a graphic novel in my life, but I'm genuinely tempted by this. Sounds like a head-book.

My knowledge of graphic novels/comics/manga/BD is limited to Persepolis, the 'works of' Guy Delisle, Batman, TinTin and 'Lil Lotta. Would I like this Dr Piley?!

Heff - well I seem to get called Piley more than the other name, so it seems to be my unofficial name these days... Most (but not all!) people in the office still manage to call me by my real name tho!

Mondo - bah, what a swizz of a link! there I was, all buzzed up to see what you made of it only to be hit with requests for money!!

Ph - I've never really watched that prog, but if it'll make you buy it, then YES, it's EXACTLY like that!! The humour in it is very acidic, which is not Clowes' traditional style, but of course is all in keeping with the Wilson charter.

ISBW - i'd love to know what you make of this book! This is no superhero 'smash em up' romp, this is inteligent, thought provoking stuff. I'd go with 'a head book' as a good description. If you do give it a go, do please let me know.

Cocktails - Guy Delisle, bloody hell I LOVE that guy! Shenzhen, Pyong-yang and the Burma Chronicles have given me such great pleasure... such amazing eye openers, and a real insight into some very, erm, different countries and cultures. Persepolis has its moments too. I'd say a love of Guy Delisle and Marjane Satrapi would make Wilson an excellent purchase in my opinion! (don't think the other 3 would have much sway either way!).

oh and re Ghost World, it does seem to get a bit of a 'marmite' reaction. The most common criticism being that "nothing happens". But funny enough it's this long meandering melancholy stuff that I love about it!! To me it's about real life, it's about relationships and growing up. It's the opposite end of the scale to all the crash bang wallop of superhero comics.

Some of the dialogue in it is achingly poignant... but yeah, on the outside not much happens on the whole, which at times is just like real life in fact!

Well, I like Shenzhen and Pyong yang very much indeed (although I read them in French, so you probably actually understood them more than me).

So Wilson - sold to Amazon's best customer of the morning! I also tracked down a Harvey Comics re-issue of LiL' Lotta and Lil' Dot. Ahem.

Cool book - I might have to try it some point

On the subject of nom de plumes, do you remember Smiley Miley, Piley?

Well Piley, it came, I read it and I loved it! Wilson is everything IS touching, disturbing and funny - all at the same time. Thanks for the tip off. I'm going to get Ghost World now.

hey all, I've been layed flat with laryngitis and bronchitis, hence the dip out of view. Still a bit rough, but on the mend now (I think.. coff coff)

Cocktails - Eek, it's funny, as soon as someone takes a punt on something you've championed you start getting all worried! Anyway, I'm delighted that you gave it a go, and even MORE delighted that it hit the spot for you! Great stuff! A real gem isn't it? I've read it through 3 times now, and have enjoyed it more each time. Do let me know how you get on with Ghost World.

F-Ron - well not officially no, although I guess I get called Piley more than I do my real name these days! It all stems back to when I used to play cricket for my work back in the late 80's and early 90's. The guy who ran the team was from the West Country and had this thing where he'd put 'ee' on the end of everyones name... So Dave was Davey, Paul was Pauly etc etc. You can't really stick 'ee' on the end of Ian, so he started to call me Piley... 25 years later...

I can report another hit here. I read it all in one sitting. Engrossing, troubling, touching, cringe-making stuff. I've had a LOT of patients like Wilson (I cured each and every one of 'em, of course.).

Clowes was giving a Q and A talk in Brighton while i was away on holiday. If I'd been around, I might well have gone along. So thanks for putting me on to him and his work.

Cheers Heffa, am on the mend ta!

Really pleased you enjoyed it ISBW, glad I didn't know you were buying it too, i'd have been worried sick!! It's a gem isn't it? So much going on.

There was an interview with Clowes (mostly about Wilson) in the Guardian at the weekend if anyone fancies seeing it:

Looks like this could be something else that I have to add to the collection of things I'm still trying to find time to read, watch or listen to. Still haven't worked out how you manage to fit all these things in.

Martin - it's one worth adding to the list. As for finding time, you've got to cut down on all that sleep!

Picked up my copy of Wilson from the shop earlier today and just finished reading it.

I'm so glad I bought it on your recommendation. It's a real up-and-down read. One moment I was chortling at some outrageous comment he was making, the next I received a sucker-punch to the stomach as one of the more poignant pages made a huge connection with me and rocked me back on my heels.

There's some lovely stuff in that book and I think I may pick it up again tomorrow and give it another read.

Dan, I'm really please you enjoyed it, I thought it was a pretty safe bet, but you never can tell with these things. the 'ups and downs' were what really got me too. As I mentioned in the original post, the web-cam bit was heart-wrenching, and the fact he got the name of the train slightly wrong actually doubled the agony for me!

I've been through it 3 times already, and enjoyed it more and more each time.