I was sorry to hear that Frank Sidebottom died this morning, aged just 54. It was only in May that Frank (real name Chris Sievey) found out he had cancer, he was treated quickly, but alas it didn't help him. I see from his MySpace page that he was still gigging right up to the end (incredibly, he was due to play my home town of Leigh-on-Sea at the end of this week), and had even updated his blog yesterday (sadly I note he'd changed his status to 'very poorly'). 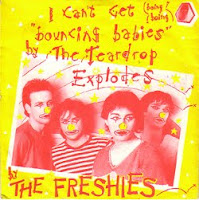 Checkout Desk" or "I Can't Get 'Bouncing Babies' By The Teardrop Explodes"?? Both these titles remind me of classic era Smash Hits magazine!). But from 1984 onwards he wore the papier-mâché head of Frank Sidebottom and became one of those odd cult phenomenons that nobody can quite work out. Chris invented a whole world for Frank, and it was incredible how he remained 'in character' throughout. Even his blog posts about his illness were written as Frank... Having being diagnosed with a tumour close to his oesophagus he said "At first I thought I had a tape worm in me. Have you seen them? They're ace, like a monster from another world but live in you and nick all your food. I tried 300 quids worth of Gaviscon, but that was bobbins. I'll just go with whatever they say after trying that".
I've been a festival go-er from the 80's right up to the 2000's. Bands come and go and perhaps 'define' a year, but when I look back on my years of festival going, it's people like Malcolm Hardee, Charlie Chuck and Frank Sidebottom who evoke the real memories of those times. People who played there year after year in the comedy tents and side stages. Old friends who it was traditional to catch every year - all 3 were ideal late night ways to finish a 'busy' day.

I only interviewed Frank last year (here). We did it remotely but he came across as a really nice down to earth guy. He even sent me a little package with a signed CD and flyer shortly after. 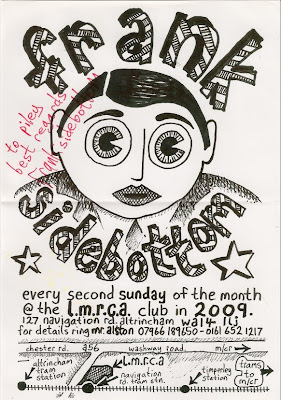 Remember your Q and A with Frank, almost ironically, he came out of it as a really level headed chap. It's getting a bit scary that these sort of bods who were players (McLaren) or periphal types (Frank) are beginning to drop off of the conveyor belt.

Sad - very funny man and the passing of a real legend

Daft isn't it how you can get so sad over the passing of someone with the most off-the-wall comedy act accompanied by a papier mache head.

Despite owning many Frank records I must admit I've not listened to him for years (since I have no record player!) but often subconciously incorporate his phrases into everyday life e.g. I always refer to Freddie MerCURy.

I think it was his childlike innocence, over-riding self belief in his world and the fact that his act was just so bizarre that made him a genius.

Rest in peace Frank/Chris....thank you.

Mondo - yes, a sure sign we are creeping up the ages eh? What is worrying is how many people seem to be going at such young ages these days. Makes you think.

F-Ron - Not to everyones taste, but he certainly made a lot of people happy.

Hi John - I know exactly what you mean. I'm the same with Charlie Chuck, when you actually look at it the act is rediculous, how could there be humour in it? But see it live in the company of others and it just works - best not to try and work out why. He'll be missed (you know he will, he really will. thank you).

I was very sad to hear this news, too. Frank was a sort of combination of music-hall innocence and insane anarchy. I saw him get booed offstage more than once, and always wondered if there were ever tears on the real face under the big papier-maché one. But I think he just did what he did, and if people got it he was happy.

We always start Christmas day by playing his 'Christmas is Really Fantastic' down the phone to our mate Steve. So he'll live on in our house.

How do you come up with a name like "Frank Sidebottom" ? There's GOT to be a story "behind" that....

ISBW - I feel acts like Frank are a rare breed these days. Comedy seems to have become too slick and 'rock n roll' these days, and all people are interested in is trendy stand ups (and if they are good looking all the better). There almost seems to be too many stand ups now, and even if you are only half good it's enough to get you on one of the hundreds of TV progs that'll use you.

Who cares about odd-balls like Frank and Charlie Chuck these days? It's a shame, as these acts like you say, are a like to our variety\music hall past.

Heff - As it happens I've no idea how the name came about! Have to look that one up!