Bloody hell, I've been trying for years to get those two words in the same sentence!!
My love for Southend council is well known, but isn't it wonderful that even with my low opinion of them, they still strive to dip further in my estimations! Currently the council are car parking crazy... having in one fail swoop stopped just about every 'free' roadside parking space that was left in town. All of these spots have now been converted into 'permit holder' only spaces... roads and roads of 'em. And to be honest, I'm not sure if anyone has actually got one of these 'permits', because just about every space now seems permanently empty day and night. Still, you can of course park in the council car parks instead, a bargain at £10 a day.
This permit scheme remains in force on Saturdays too, thus ensuring the council are doing everything they can to attract much needed shoppers to the area. This will be the same council who will be scratching their heads in the near future saying they just can't understand why everyone is going to the nearby Lakeside shopping centre with its 13,000 FREE parking spaces....
But this isn't my reason for blogging.... The council must have bought a job lot of paint to mark out all these permit holder parking spaces, and with a few tins left over decided to scrawl a few cycle lanes in the town. Very commendable I hear you cry, just the thing to encourage people to be green, get some exercise blah blah... But I'd wager that the person who designed this particular cycle lane that sprung up a couple of weeks ago has never ridden a bike in his or her life. How can I be so sure? Well would a cyclist design this: 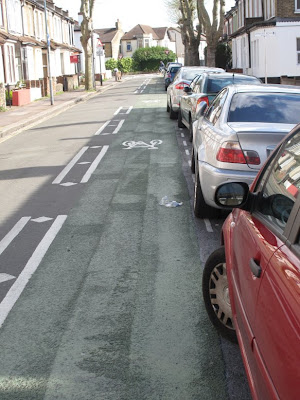 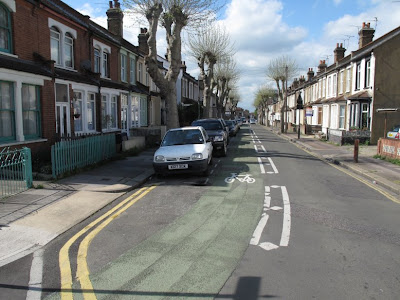 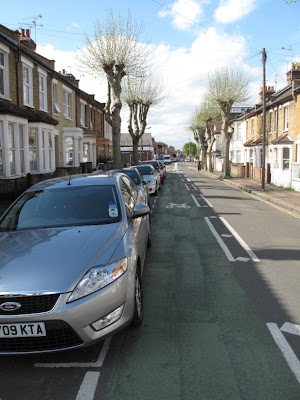 Yes, roll-up, roll-up ladies and gents, try your luck in Death Ally. Successfully survive a whole week and win any prize off the top row. It must be like a game of Russian roulette, as you nervously pass each parked car, just waiting for the door that springs out and sends you 20 yards down the road (minus bike). 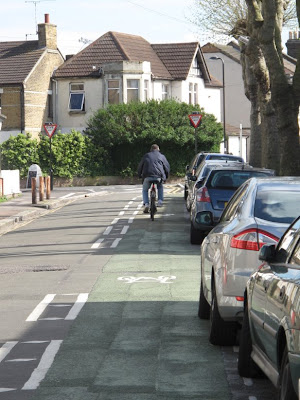 a brave cyclist tries his luck at this latest game of skill and chance.... will he make it to the end? I hear the makers of that Total Wipeout programme are considering using it in the next series.

Oddly I always used to think cycle lanes were devised to protect cyclists, not lure them into added danger! Isn't there supposed to be some sort of barrier between the two, or at least a gap? There is only parking on one side of this one-way street, and before this lane appeared, all the bikes were just in the inside of the road, which as you may just see in the pictures is all double yellow lines.... so the odd drain to contend with yes, but at least no spring-door in the face at any moment. Admittedly this road is fairly narrow, but if that was the problem, wouldn't someone with half a brain have just put the cycle lane on the OTHER side of the road, where there is no car parking??!
They have also just created a similar death-trap along part of Southend seafront too. Well done SBC, yet another example of an excellent spend of our council tax..
Piley

God help the DRUNK cyclists ! They're DONE FOR !

I wouldn't cycle on UK roads in 2010 if you paid me. I'd rather play chicken on the M1. What I'd do, if I was you Piley, is drive to Harwich (with your bike on the back), hop on the ferry and cycle 'round Holland for a week or two. It's flat and it's bike friendly i.e. all the things Blighty isn't. And, when you come home, you'll never want to use your bike again.

Bloody hell, what a bunch of numbskulls.

Well Piley I am no fan of Southend Council and really thought there was a groundswell of opinion in Southend to get council voted out. I literally couldn't wait to hear the Southend Council local voting results last Friday to see them ousted, unfortunately they stayed in and I think even increased there majority !

This is a dumb wit idea for sure but I think the intention is to try and drive cyclists off the pathways, as a regular walker I can testify to the fact this is becoming an increasing problem in the area. I have already been involved in a couple of heated exchanges !!

Thanks everyone, priceless isn't it?

I'd imagine being a drunk cyclist would be better Heff, you'd not be quite so scared, and the drink would numb the pain later on too.

JM - Yes, i've been there a few times, it all works very nice doesn't it? all very cosmopolitan and grown up... it's never work here!

EF - Yes, the riding on the pavement when a bike lane is provided is bloody annoying! we gave up half of the pavement at Victoria Circus to make a bike lane, and still nobody uses it.

Can't see this death trap luring many off the pavements though... see, you turn 40 and you turn into a moany ol gig! I told ya!

And here's another council classic....

don't get me started on parking Mondo! It's the dearest parking of any town around here, and the only town i know who still charge to park on a Sunday. Check out the ticket machines, no charge on Good Friday and Christmas day... They are all heart. Must remember to pop down the high street next Christmas day...

Genius!
As genius as the well talked about section of cycle path here in Leek that stretches a whole 8 feet...what are people thinking???

Not 100% certain, but the direction of the painted bikes leads me to suspect that this is intended to be a contra-flow cycle lane, allowing the pedal pushers to go the wrong way up a one way street. we have some like that in Ipswich, but not with cars parked behind them.

Cheers to Mondo for the bus shelter link. As one who has to decide where they go in Suffolk I'll be saving some of the quotes!

Wankers mate, not much more i can be bothered to say about them. Good piece made me smile and angry at the same time , not an easy responce to get from me mate lol.

Not only do you turn into a moany old git when you reach 40, but you have a greater sense of mortality too. Those cycle lanes are atrocious! What'll the council say after an accident occurs?

JnT - Ohhh, i LOVE them mini cycle lanes that total the length of a bike! Who is it who gets this job?! I want it, I can do this...

Simon - good spot, hadn't picked up on the direction of the painted bike. You are probably right... although I have today checked it out again and there are no signs at either end to say which direction you are to use the lane, so chaos is the most likely outcome!

Carl - yup, that was the work I was looking for! glad you were angrily entertained ;-)

Ist - if... erm, WHEN, there is a serious accident, the owner of the car will quite rightly be hauled over the coals, and fined heavily. Whats your problem??!

Come on Piley, be fair, the council have got a lot on their minds at the mo trying to rescue their 8 "palm" trees from dying.

Personally I think this was their test site to introduce a cycle lane on the Pier (after making it a dog crap free zone of course).

Hi mate just a quick postscript.
On your last picture of the cyclist there is a first floor flat in the background with a window open ..... my sister used to live there ! Just dawned on me .....

Warble - I hear replacement palm trees have already been bought to replace the flagging ones!! TRUE!

What is it with this council? they claim poverty when closing our only swimming pool and other amenities, them manage to find millions when it's a roundabout conversion that nobody wants (or needs) and enless palm trees - I hear they are 3 grand a pop by the way (true again!)

E.F - Will view that window all the fonder next time! Good spot!