Last week we upped sticks for 7 days down in Devon, and boy were we lucky with the weather...
There was much picturesque site-seeing to be had, but it was whilst out on a day trip to Torquay that I got all proper excited as we happened to drive past this very ordinary looking hotel... 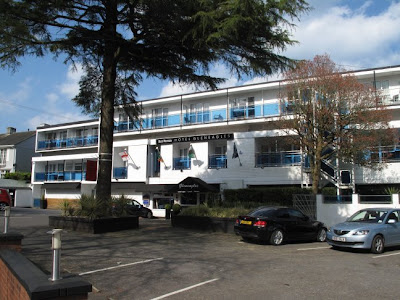 This is the legendary Gleneagles Hotel, where in May 1970 the Monty Python team stayed whilst filming in the area. At that time the hotel was run and owned by Donald Sinclair and his wife Beatrice. 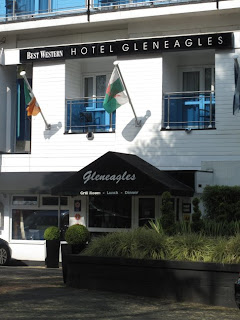 programme a few years back (oddly, I've caught this very episode at least twice this year whilst flicking through the satelite channels), and they dedicated some time to the Gleneagles Hotel, and the odd behavior of its manager. Stories include Sinclair throwing a bus timetable at a guest who dared to ask when the next one to town was, verbally abusing Terry Gilliam because his table etiquette "wasn't British", and the famous chucking of Eric Idle's suitcase over a wall because Mr Sinclair thought it might have contained a bomb!

Michael Palin's excellent book - "Diaries 1969-1979 - The Python Years" has a couple of entries in May 1970 relating to this episode. Palin notes that Sinclair "seemed to view us as a colossal inconvenience right from the start”, and goes on to say that when he and Graham Chapman decided to leave the hotel after just one night, the Sinclair's gave them a bill for two weeks! Chapman too wrote about the experience in his book "A Liar's Autobiography", where he described Sinclair as "completely round the twist, off his chump, out of his tree". Cleese has said of Sinclair that he was "the most marvellously rude man I've ever met".

Almost all of the Pythons checked out of the Gleneagles rather quickly, in favour the Imperial Hotel down the road. But John Cleese stayed on for weeks, and even invited his then wife Connie Booth to join him and marvel at their host.... and comedy gold was born!

The first series of Fawlty Towers was broadcast in 1975, however an early prototype of Basil Fawlty was actually aired several years earlier in 1971. John Cleese 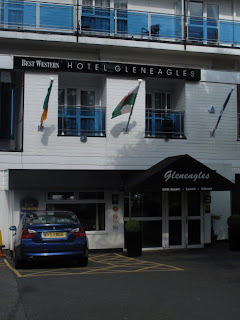 was a writer for the sitcom Doctor in the House, and in the the third series (which by then was titled Doctor at Large) one of the doctors checks in to a hotel, owned by a very aggressive and incompetent manager!

There's a clip of this Doctor at Large episode on YouTube, but the rotter has disabled embedding... but if you're keen to see a non-Cleese Basil Fawlty, click here.

A number of stories used in Fawlty Towers were based on second hand accounts of Sinclair. The episode The Builders was inspired by an incident involving several builders who had come to rebuild Sinclair's garden wall. Sinclair's berating of Terry Gilliam must have been the inspiration behind the Waldorf Salad episode. And the "we've had a bomb scare" moment in Basil the Rat must surely relate to poor old Eric Idle's suitcase! Oh and Sinclair really did employ cheap foreign labour too, many of whom suffered abusive treatment from him. And the coincidences don't stop there either, many years later, in the interminable film Rat Race, John Cleese plays an eccentric hotel owner called Donald Sinclair! 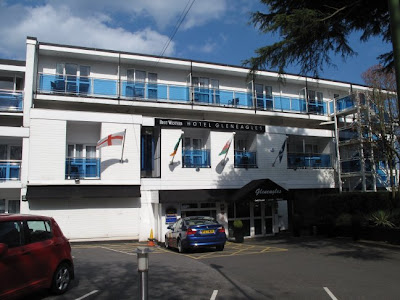 Donald Sinclair opened the Gleneagles in 1963 as fifteen self-contained holiday apartments. Sinclair was already well-established in the hotel business and had been running the Greenacres Hotel in Torquay since 1950. He sold the hotel in 1973 and moved to Florida with his family, where he eventually died in 1981, aged 72... But his hotel still lives on. In 2006 it was given a £1 million makeover and upgraded into the stylish boutique hotel it is today... Rather fittingly, Prunella Scales was invited along to re-open the building.

However the Gleneagles is not the building shown in the opening titles of Fawlty Towers, as many think... in fact none of the programme was ever filmed in Torquay. Those opening credits show Wooburn Grange Country Club at Bourne End in Buckinghamshire (which was alas demolished in the early 1990's). 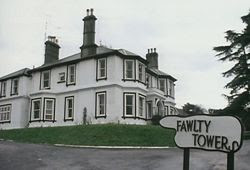 Oh and guess who's voice was merrily chirping away on my Tom-Tom as we drove past the Gleneagles, yup John Cleese! Weird!

rockmother said...
This comment has been removed by the author.
Sunday, May 02, 2010

I love that - great post Piley. I got similarly excited when I found the hotel where Jacques Tati filmed Monsieur Hulot's Holiday in Brittany a few years back. Brilliant.

Amazing to think of a hotel manager being that rude amd his hotel flourishing lol.I mean you'd walk wouldn't you ? Also amazing the amount of people who work with the public but actually don't like people too. Really good piece P.

Gerry Anderson 'found' Parker in a similar fashion: the wine waiter where he and friends would often dine was an old boy who would put h's where there shouldn't be one and vice versa: 'Whould you like to see the whine list, sir?'

There's an FPS (First Person Shooter) game called Counter Strike and some enterprising chaps have created their own modification for it where you can play at Fawlty Towers.

You Tube video of it here: http://www.youtube.com/watch?v=LUnvzuLKpuk

The attention to detail is brilliant, even down to the main dining room wall being bricked up after O'Reilly and his men misunderstood Basil's instructions in 'The Builders'.

Oh, and if you look closely, you can see the Moose's head on the wall in the foyer.

I love visiting a rock, TV or film location. A real find P. Did you go in and have a nosy?

I can feel a buzz for a Feelgood's/Canvey run coming on after catching some of Oil City last week..(did you know they also did a live from Croc's album?)

Fawlty Towers is one of those programmes I can pretty much watch repeat after repeat. I do find it difficult watching the Gourmet Night episode but most of the others!

I was intrigued to read about an "alleged" unshown episode called The Robbers, although John Cleese pretty much debunked that story. Glad you had a great time in Devon, one of my favourite places too.

Whats your favourite episode? I would have to go for The Anniversary.

Hi RM, thanks, there's nothing quite like it is there?! Windsor Castle, a Royal Palace, they all leave me cold, but a building used or that inspired a favourite film or TV show, wow!

Carl - It's amazing isn't it?! I often wonder if rude people realise they are rude, or do they just so desensitized by dealing with the public all day every day? I can't see you putting up with much of his antics! Love to see the reaction after he throws YOUR bag over a wall!!

JM - didn't know that one, interesting. I guess, this happens more often than we think, it's nature to pick up on these sort of things.

Dan - how incredible is that??!! What an odd (but brilliant!) choice! Pity they missed the Major reading his morning paper!

Mondo - Didn't pop in, it all looked rather grand. Think if it had been a building used, and I knew the inside I might of done, but as it was I just tooke these 4 pics and off.

PH - I find it really hard to pick a favourite, there is just so much crammed into each episode. Think you are right, it's easier to pick a least fave, and Gourmet Night would be it.

These days a few negative postings on Tripadvisor would have put him out of business within a year!

Another fab read here Piley. And ISBW is so right about trip advisor. I almost booked a hotel recently, but fortunately looked at the site before I did. It had the worst reviews I've ever seen, my favourite being the staff's bored shrugs when the writer pointed out to them the smelly dried up pile of sick that lay behind the bedhead...

But I digress! Good to see the inspiration behind the sitcom. I just find it hard to believe that its a 'boutique hotel' now!

ISBW - I know, it's amazing how the net has reshaped just about everything we do these days isnt it? Even without you realising sometimes. But what a good job the net wasn't about back then, as we'd have never got Basil!!

Cocktails - I completely agree with the member of staff, why that was a bonus extra feature, that had been thrown in (or up!!) free of charge... some people are never satisfied ;-)

Glad you like it, and i have to confess I'm not really sure I know what a 'boutique hotel' really is! It's in their blurb, and they seem very pleased about it too, but, what is it??!!

That's cool. The building still seems to have 60's styling.

A boutique hotel is a small hotel aimed at posh people. It has trendy looking furniture that enables them to charge 3 times as much as a non-boutique hotel.

Heff - you're right, from the outside it looks fairly unchanged from the time Cleese stayed there... although it is a boutique hotel now, so you just KNOW what it'll be like huh?? ;-)

thank you Cocktails! I feel as though i'm the class dunce now - should I have known that??! It sounds like a bargain anyway, i'm off to book up straight away...

Top story Piley. That man inspired some legendary TV. Though I doubt that he would see it that way.

Yeah, I always wondered if he ever saw FT and realised it was about himself! He probably just thought, "what a rude manager, not like me..."