One Of Those Days... 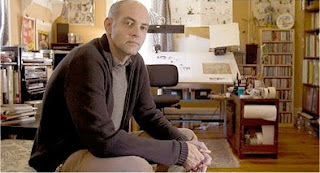 On the 18th March I received an e-mail from a mate that quite literally stopped me in my tracks.... Just about my all time favourite comic book writer and artist Dan Clowes was coming over from the US of A to do a signing at my favourite comic shop, 'Gosh!' in London on 24th May. This was to promote his new book 'Wilson', which is his first new piece of work in over 6 years. I honestly couldn't believe it... I booked the day off work there and then. The date has been in the schedule ever since and I've been looking forward to it for weeks... almost counting the days, I never thought I'd get a chance to meet this man.

Today the date finally arrived, and after spending 20 quid on travel I set off for London with a few heavy books in my bag, just in case there was a chance of getting any extra signatures. I arrived at the shop at 11.50 only to find out ........... it's now tomorrow.
The member of staff behind the counter was perplexed as to how I had picked up on the date, although admitted that others had turned up today too. They may be disassociating themselves with it now, but the shop were definitely advertising this date (at one point at least). I was told this date by a member of staff on my last visit to the shop, and I even still have an e-mail from a member of staff stating the 24th.
They guy never really got the gravity of my predicament though, and just portrayed a 'no harm done, pop back tomorrow' type approach, as though everyone who walks through the door is only ever a stones throw away anyway. He didn't seem to grasp my situation as I desperately asked him if it would be possible to at least get a book signed for me tomorrow. He told me he couldn't do it - but to be honest, under the circumstances that would have been a consolation prize at best anyway, as I was really keen to meet Dan Clowes.
I rarely get to London these days, but always end up spending way too much money in Gosh! when I do. However I was so gutted today when I was told this, that I didn't have the heart to peruse, I simply walked out and set off for home - Just five minutes after finishing my 2 hour journey in, I set off on my 2 hour journey home... the bag feeling that much heavier on the return leg.
I appreciate that this was partly my fault, and why I didn't re-check the date beforehand I'll never know. I could just have easily have booked tomorrow off instead of today, but not now. I'm really annoyed to have taken all the time, trouble and expense to attend this event and still be missing out....
Absolutely gutted.
Piley
BREAKING NEWS UPDATE!!!! Tuesday 25th May 2010
I've been contacted by Gosh! today, and I've been really impressed at their swift reply, sincerity of apology and offer to help. I got a full and frank answer as to what happened.... They confirmed that yes, originally, the signing was given the Monday slot, but this was later changed to Tuesday to fit around other events the sponsors had planned. They informed me that although they made a financial contribution to the costs of the visit, in no way were they able to call the shots, so they just have to take what was given. I was told that despite what I was told on the day, they would be making sure that I get a consolation prize of a signed copy of Dan’s new book in post, and one or two other goodies as well.
Short of delivering Mr Clowes to the door of Piley Towers to shake me by the hand, I don't think Gosh! could have done any more to try and salvage something from this episode. I think it reflects well on them, and you know many others would not even bother to even reply. I really appreciated the offer, and it did manage to lift the gloom that's been hanging round for the last day!

DAMMIT ! Everything COOL happens in London....

hmmm, yes, but not always on the day you expect it too....

Sorry for you there, mate. I had a similar (but less painful) experience a couple of months ago when I had tickets to a Yo La Tengo gig in Manchester and tickets to a critical late kick off football match in the midlands. I blew out the gig and still regret it.

Can't you take today off and go again, Piley? I'm sure your boss would be sympathetic.

Hi VS - a tough decision for you there, never fun missing out.

Of course I didn't realise I was missing out, not until it was too late at any rate.

Almost 24 hours on and I'm still feeling just as gutted and generally 'sorry for myself' as I was at the time... probably because I know the event is still to come and I wont be there.

Thanks Dan - I think I have meetings today, at a push I probably could re-arrange, but what I don't have is the available annual leave, and I certainly can't justify another twenty quid of travel...

Bummer Piley plus what a crap attitude in the shop from the staff. You never know there may be another chance, perhaps he will read your blog and make a special visit to Southend ? Worth dreaming about anyway.

Mondo - 'hot off the press' info is a double edge sword I guess isn't it... Cool to get a head up early doors, but the danger is exactly how this panned out.

Ta EF - Yeah, I was dissapointed at the lack of support offered at the time - the guy must have been able to see how gutted I was, and I told him the full story. Still, if you go back to the original post you'll see i've updated it with some more positive news... Gosh! have been in touch, and are making sure I DO at least get a signed copy of the new book, and I'm really really grateful to them for that.

I'm guessin' that this may well have been my only chance to meet Mr Clowes, but like you say, you never know.

That is really good news mate, glad there is a consolation for you. Now you just need your train fare back from C2C !