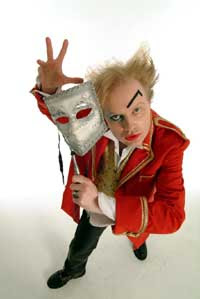 I've been a fan of live comedy for almost 30 years. One of the first comedy shows I ever went to see was Alexei Sayle at a theatre in Chelmsford around 1980/1981 (I know I had school the next morning!). But my favourite environment for comedy has to be a 'comedy club' venue. With the theatre setup there is very much a divide between artist and audience, but with the 'cabaret seating' arrangement of the comedy club, these lines become merged, and a much bigger element of danger is always in the air! Of course, you have to take the risks that go with the territory, and after 20+ years of attending comedy clubs I've had a few encounters of being 'chosen' by comedians (being 6ft 4 doesn't really help me to blend into the crowd at times!!). One encounter that particularly sticks in my mind was at the Edinburgh Festival in 2004, where Gary Le Strange strutted up to me and sung pretty much the whole of his song 'Modern Disguise' directly at me! Literally a couple of feet from my face!

Gary Le Strange was\is the comic, musical creation of comedian Waen Shepherd... "The idea was simply to find a way of combining various pursuits at the same time, like writing, acting, making music and trying to be funny. Specifically, I wanted a way of making my strange sense of humour seem acceptable to a comedy audience, and a fake pop star seemed the way to go, complete with real proper albums to make him seem even more real and proper" First dreamt up in 2002, the character was 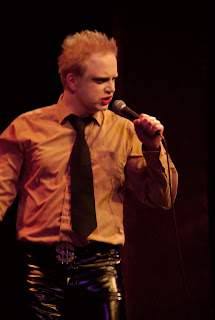 originally a send up of the 'New Romantic' scene from the early 80's.... a time which, looking back on it, has comedy gold written all over it! I was a massive fan of this era of music (and still enjoy much of it today), but much of the pretentious, pompous and over-arty attitudes that went with it are quite laughable these days. Waen has since explained why he chose this era "It started out as a New Romantic/New Wave pastiche, partly because of the software I was using at the time and partly because the genre allowed me to be weird, pompous, extravagantly-dressed and socially inept all at the same time". Waen honed his character to perfection, taking those original attitudes and pushing them just that little bit more for the comedy market. This Frankensteins monster of a creation was a combination of anyone and everyone who mattered during that period of music. He's Gary Numan, he's Steve Strange, he's Marc Almond, he's Adam Ant, and many many more. There is even a generous dollop of that architectural New Romantic David Bowie in there too. It was a very original idea for stand up comedy, and it's no wonder that at the Edinburgh Festival in 2003 he won the Perrier Award for the best newcomer. 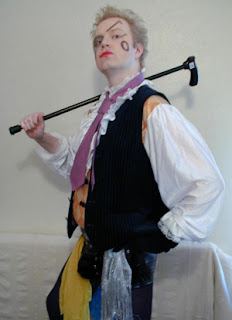 Waen Shepherd is obviously a very talented song writer, and his knack of being able to extract the essence of so many classic bands and songs and cram them into his own work is nothing short of genius. Some are a complete pastiche of a single artist ('Warriors of Style' is a combination of most of the Adam and the Ants back catalogue, 'Seedy Pimp' is virtually the whole of Soft Cells Non-Stop Erotic Cabaret album wrapped up in about three minutes, and 'The Outsider' encapsulates Bowie's output from the 70's!), where as others are a take on several bands all in one song... I actually found it an added bonus trying to work out exactly who he had 'borrowed' from for each one! If you are a fan of Soft Cell, Gary Numan, Japan, Spandau Ballet, ABC, Visage, Depeche Mode, Adam and the Ants etc etc (oh, and you have a sense of humour!) then these songs are bound to appeal... and much like another humorous singer I've blogged about, Richard Cheese, underneath it all, you can't help but admire the talent underpinning all the mirth.

The thing that can make some of the original New Romantic era songs sound so dated is their obsession with futuristic technology. I guess it was quite arty at the time to do so, but we've moved on so much that many of them sound quite funny now. Waen tapped in to this for a number of his songs and again upped the ante for comedy effect, producing a selection of po-faced tunes about photocopiers, washing up robots and toasters! Oddly, I met Waen Shepherd once, and unsurprisingly, in chatting he told me what a big fan he was of this era of music.

Somehow I fully expected to hear that, I don't think you could do a pastiche that well without having a genuine love (and a good knowledge) of that scene.

So, the songs were clever, but what really made it for me was the way he created the whole package. The clothing and bad make-up were both spot on, but just pushed that little bit more for extra ridiculousness! However it was the live persona of Gary Le Strange that was the real masterstroke... delusions of grandeur doesn't even come close! World domination was what GLS had his sights firmly set on... but it wouldn't be achieved with weapons, oh no, he planned to do it with fashion!! As Waen himself has since said about the character "Essentially he's a tragic, eccentric, outsider pop star who has never had any success, and probably never will". I saw Gary live a few times around the mid 2000's, and it was this carefully crafted pompous image that really nailed it for me. Seeing him taking it all so seriously, and even getting visibly annoyed at any laughter that his manifesto and songs created (a very bold stance for a comedian when you think about it) was a pure joy. I was always intrigued to see the reactions of the audience at his live shows, it was always 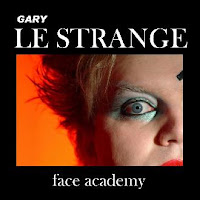 very 'marmite' (love or hate)... They were either rolling around crying with laughter (like me!), or completely straight faced with a puzzled look, never much in between. I honestly think that to fully enjoy an act like this, you need to be a pretty big music fan, or at least have an understanding of the New Romantic era. Maybe there are people who didn't get Spinal Tap and the like too, because they just couldn't relate to what they were poking fun at in the first place.

Despite really enjoying his act for a few years, I have to confess that until this week I'd all but forgotten about Gary Le Strange. A conversation with Planet Mondo about possible themes for our future podcasts threw up the idea of 'humorous\comedy' records. I had a flick through my CD collection, dug out the GLS albums, and they have been on the player all week! They are still very clever, and looking back, were yet another piece of the 'complete package' jigsaw... even the design of the CDs is perfect. Slip these albums in the middle of your early 80's collection and they would blend in without a second 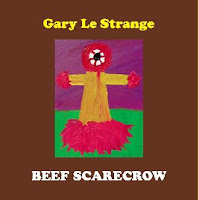 glance. But on closer inspection they are hilarious! Particularly the Steve Strange-esque pose with the bald, silver tailors dummy with the unfeasibly long neck!!
Having been reunited with GLS, I did a search on the net to see if I could find out what's happened to him. Not only is he still going, he appears to have sensationally spurned the New Romantic scene!! His new image and most recent album, Beef Scarecrow, have seen the man reinvent himself as a pompous, suited n booted art rocker! I've already ordered it, so I'll be sure to let you know!
LINKS
The Official Gary Le Strange website (where you can stock up on GLS CDs)

Finally, here are a few Gary Le Strange songs for you to try.

He looks scarily like that bloke who does the Music reviews for the Independent (Simon Price?). Only Simon Price's hairdo isn't a comedy prop..

Well he sure is a manly fellow!