Best of the Fest? 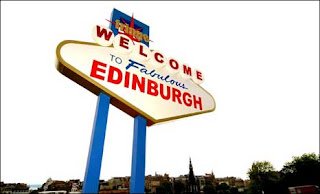 It's about this time of year when I get really envious of anyone who is Edinburgh bound... The bank holiday weekend is the crescendo of the month long Fringe Festival, and nothing can beat the 'buzz' of the place at this time. I've been lucky enough to get to the festival 4 times over the last 10 or 12 years, and for me it really is the ultimate holiday... cramming in 4, 5, maybe 6 shows a day EVERY DAY, yet still not even scratching the surface. This year’s Fringe features no less than 34265 performances of 2098 shows in 265 venues.

Digital TV station 'Dave' have been running a poll to find out which comedian has the best 'one-liner' joke in their act this year. A panel of 'comedy critics' came up with a shortlist, and then put it to the vote... I doubt it was very scientific, but none the less, they have just published the winning top ten, and I have to say there are one or two belters in there! The winning line came from Dan Antolpolski's current show 'Silent But Deadly'.... Here's the list in full: 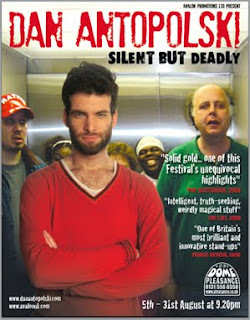 1) Dan Antolpolski – Hedgehogs - why can’t they just share the hedge?
2) Paddy Lennox – I was watching the London Marathon and saw one runner dressed as a chicken and another runner dressed as an egg. I thought, 'This could be interesting'.

3) Sarah Millican – I had my boobs measured and bought a new bra. Now I call them Joe Cocker and Jennifer Warnes because they're up where they belong.

4) Zoe Lyons – I went on a girl’s night out recently. The invitation said ‘dress to kill.’ I went as Rose West.
5) Jack Whitehall - I'm sure wherever my dad is; he's looking down on us. He's not dead, just very condescending.

6) Adam Hills – Going to Starbucks for coffee is like going to prison for sex. You know you’re going to get it, but it’s going to be rough.

7) Marcus Brigstocke – To the people who’ve got iPhones: you just bought one, you didn’t invent it!

8) Rhod Gilbert – A spa hotel? It’s like a normal hotel, only in reception there’s a picture of a pebble.

9) Dan Antopolski – I've been reading the news about there being a civil war in Madagascar. Well, I've seen it six times and there isn't.

10) Simon Brodkin – I started so many fights at my school - I had that attention-deficit disorder. So I didn’t finish a lot of them.
Piley

paddy lennox's joke should have won.

There's some real winners there, the Starbucks one got me , excellent :-).

I've been to Edinburgh a couple of times, but never the festival - it seems to have become a Glasto for the arts.

Anonymous said...
This comment has been removed by a blog administrator.
Wednesday, August 26, 2009

Mondo - you are spot on there... it is exactly like that. It has the same buzz as glasto too. Instead of wandering around a big muddy firled you walk around a big city, instead of diving into various tents you dive into just about anything (the last year i was there there was a play in a toilet, and another that took place in a car!), and at the end of the day instead or returning to your ten, you go back to a hotel!

Some crackers here. I must admit I have lost touch with the comedy circuit altogether, if they are not on Mock the Week or Have I Got News for you then then there is a good chance I won't have heard of them.

I really enjoyed the Edinburgh Festival I went to, but I have got a feeling all those people milling around would give me the right 'ump now ! I'm getting old Piley !

A few goodun's there. Only trouble with one liners is that by the time my poor old brain has worked out the joke I've missed half the next one. I've never actually been to the Edinburgh festival but hopefully there's still time for me to fit it in.

EF - Yeah, it gets pretty crowded there... are you refering to the 'street entertainers' in particular (they can be very annoying!) or just everyone who dares to visit??!!

Mainly the street entertainers mate, they create the pockets of loads of people milling around and then the blood pressure rises.

Don't get me wrong, I would love to return for a weekend as it is a very enjoyable experience. In fact I am reminded of the clown's pocket gag in particular from Mr Vincent !

PS - Watched Man on Wire last week, will do a separate post.

I guess this isnt a good time to show you my new juggling act huh??!!

But strip away the street performers, and the Edinburgh Fringe Festival is the best and biggest in the world.

When we have some moeny again we'll have to pop up eh?!