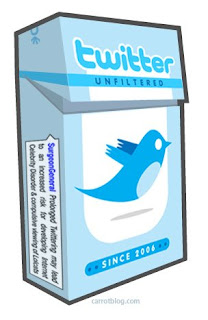 I'll level with ya... I set up a Twitter account a while back, and whilst there are undoubtedly some nice people on there, I've got to tell you..... I think it's a tragic waste of time!!! It's been invented for the texting generation hasn't it? And although texting does have its uses, I think they are all personal ones (great for keeping in touch with mates, letting people know you'll be late etc etc). I do struggle with it in the outside world though. It makes me cringe when a radio debate show (Radio 5, TalkSport, LBC.. they all love it), say "text in your views now to....". In my opinion, if someone can convey their thoughts on the subject (and at times, these can be pretty heavy subjects) in 160 characters or less, then chances are they are a fuckwit!! Is that harsh??!!

Twitter take this to an all new level, 140 characters to wow people with your news... Hmmm, I don't think so! Due to the limitations, the 'tweets' are mostly of a tedious nature to say the least. It's all "had a great swim today" or "Mmm, yum yum, roast beef today, my favourite"... y'know, real earth shattering stuff. Sadly, this cartoon strip is probably not too far from the truth.... 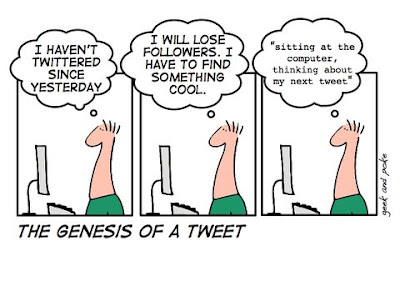 It's all a fookin' waste of time. You were right the first time when you told me, but I recall omitted to mention your own repeated twitterings. I started it but really can't be arsed with it. What's the point? And hav eyou actually looked at the shite that Stephen Fry and the bloke from Cunting Crowes actually post? Woke up, wife at work, had a wank, breakfasted, went to work, sitting at my PC thinking about my next tweet. You're so right to say that it's for the illiterate texting generation. The pic at the end of your post made me laugh out loud. I'm off to close my twitter account.

Ok then Col, I kind of liked your updates, LOL. I just thought it was kind of fascinating to know that you were over there doing something and at that very instant it was on my phone all the way over here. I think there are some good uses for it. I'm still in the game.

Hi Col - yeah, I did try ta warn ya!! ;-) You've nailed it though, just about all the updates are a waste of time. You don't learn anything (apart from what someone had for tea), it's a waste of time. You were right to give it a go, like me, I was intrigued, and you don't know til you try, but I can't see any real benefits i'm afraid.... apart from dropping the odd message to..

Wil! - The fact that I sorta know you now, turn twitter into regular texting for me! you drop me a line I drop one back, we's bending the rooolz dude ;-)

Can't be doing with it. Blogging, Facebook and Myspace. In that order, will do me.

This will be the only time I am ever going to spend 140 characters explaining that I will never ever 'Tweet'. Although that's not enough characters so now I need to add mor

I don't tweet... firstly I'm too verbose, look at my blog and my comments (hey are you still reading!) to realise that I can't condense my thoughts into a small enough sentence... or as Mrs F would say - "Stop bloody waffling!"

secondly - I like blogging, it's an open diary that others can tip their hat at and I've had some great revelations by writing my thoughts out and equally so from some of the comments back - esp along the lines of "Stop bloody waffling!".

Did like the Tweeter novels esp the last two...

I can honestly say that although I have heard of Twitter, I have no idea what it does, how you use it and what the point of it is. I know that once I heard people like Russell Brand loved it was not for me ! I don't need to know if he had a wank after breakfast for example .....

PM - Yup with you on bloggin and MySpace... I can at least see the point of them both. Not convinced about Facebook tho... Luddite? Me?

very good 'ishould'! Funny tho isn't it, when all the press for Twitter is so positive, yet I'm struggling to find anyone who finds it usefu

Further - would rather read your blogs than your tweets any day! You've got a good little site going there, thought provoking, funny and informative... show me a twitter account that can do any of that!

EF - That's about the extent of it too I'm afraid, although alas, it's not always as interesting as that!

Well think of it this way too. It's like text messaging but you don't have to give out your phone number. It's also good for advertising your blog. All of my tweets go right to my Facebook updates, there are 45 or so friends over there that have never been to my blog.

Well I must admit, I DID enjoy the "Wil is currently burning a mule" tweet, but other than that one, yeah - It's shite, and a complete waste of time unlike blogging, which is TOTALLY PRODUCTIVE, LOL !!!

It's nowt but a time vampire. How can people get excited about a rebranded type of email?

Wil - I've had a few hits from it, but that's a by-product. Can't see any use for the thing itself.

Heff - Surely you don't include yourself in that statement??! I've learned stuff from blogs for sure!

Istv - it's is Emperors new clothes for sure...

Carl - welcome back! Yeah they should, why only today I heard that next year they are unleashing an ultimate website, where YouTube, Twitter and Facebook are merging into one incredible thing. Yup, it's gonna be called 'You Twit Face' ;-)

Therin lies the problem P with regsrd to Heff's comment. He's 100% correct, but I have made some good friends since I've been blogging and for this reason alone I cannot give it up. I'm locked in. Unlike I am regarding twatter. I am not using my mobile to blog or twat, and I have no intention of doing so. Therefore if I want to twat I have to do it via www. Fuck that for a game of soldiers.

I admit I'm a blog addict, and actually "backed blogger up" in my post today. Twitter (or any other similar medium), I'm just not going to bother with.

Fookinell - I think I am the only one here who thinks Twitter rocks. Horses for courses I guess...

Col - you are right, Bloggin' does suck an incredible amount of time... I don't consider myself a heavy blogger, but the time taken to draft my posts, write them, and the time spent visiting the blogs of all the pals I've made here... it is a fair bit of time... BUT, i find it worthwhile. Twitter I find is time down the pan.

Hi RM - long time no speak! Hope you are well? Well, me (and most of the above) just haven't found anything about Twitter that floats our boat I guess... if you've found it then i'm delighted! But do us a favour and let us in on it??! Why does Twitter rock for ya?

No twitting for me!
In fact, I am already done with Myspace and about over facebook.
Time to disappear off the grid again!

If you blog, why the fuck would you need Facebook or My Space or Twatter?. Or if you had any one of the above I.E. Facebook why do you need ANOTHER outlet?. Can every body really have sooo much interesting stuff to say? As kind of an out sider here, i don't blog but do read blogs, don't have facebook my space or twatter i'm starting to think that some of this is bound up in ego. Just an out siders observation, Ohhh listen to me i'm sooo interesting. A lot of it is just time wasting bollocks.Don't get me wrong I appreciate a good blog, i enjoy this one a lot but most people talk about their fucking dinner etc. Having all this stuff must take up a phenominal amount of time up ?i imagine every one getting on the PC at 5.00 and getting off it at 12.00 to go to bed zzzzzzzzzz if you ask me. Me ? i talk to my wife and kids what a weirdo eh ? :-).

Carl (a ludite who only has an e mail account :-).

Nazz - yup, blogging is the one for me. MySpace I like, but mainly I use it as a great way to hear new bands.

Carl - I thought your previous comment was a bit short for you ;-)

You write some interesting theories there... I don't know why people feel they need to have a piece of everything. As I mentioned above, I blog (obviously!) and I MySpace. But I see those two as completely different things. I do blog on myspace, but it's the same shit you read here, and if it didn't take me 10 seconds (literally) to swap my post from here to there, I wouldn't bother. I mainly use MySpace for bands and it's great for that. I find bands update their myspace page much more than they update their website (although a lot of small bands only have a myspace page). Find out about gigs, free downloads all sorts... I think it's a good tool.

Have never even clicked on facebook, because I know it's just myspace again with a different name... yeah yeah, it looks different and has a few different ideas, but basically it's another myspace... as is Bebo.

Any thing that get's you some new Rock n Roll must be good !!!. I feel that you and some of your mates here have the balance right but i just feel some people get a little too obsessed with all this stuff and usually it's the most boring bastards who write and write and write. I mean i really don't give a tuppence fuck about what people had for dinner or when they wank etc. To each their own of course but a lot of it i've read is cobblers.