Ever since I can remember, I have been a fan of Marc Bolan. I got a copy of ‘Metal Guru’ on 7 inch single for my sixth birthday in 1972, and used to have a right old rave up on the living-room floor to it (and still do when I can get the air and alcohol mixture just right!). So as a lifetime fan, and on today of all days, I thought it was time for a long overdue visit to the site where Bolan lost his life.

It was in the early hours of Friday, 16th of September 1977, that Bolan and his American girlfriend Gloria Jones (who had a hit with 'Tainted Love' in 1964) were travelling home in his purple mini 1275GT. Jones was at the wheel, she lost control and hit a tree at Barnes Bridge in Barnes, London. Marc was killed instantly, Gloria was severely injured but survived, and once she had recovered, returned to America.

So this morning, my partner Julie and I set off to visit the site of that fatal accident, exactly 30 years to the day since it happened.

We arrived just after midday, and although the shrine hides down a small, quiet lane (you have to park in a nearby road and finish the journey on foot), the closer you got to it, there seemed to 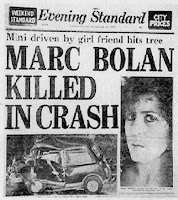 be a real atmosphere in the air. The first thing that hit me, was the range of ages paying their respects. Middle-aged men and women, small children, old age pensioners, and even some rubber clad twentysomething cyberpunks - but that just about summed Bolan up, as even in the 70s (a time when there were great divides in music, and you weren't allowed to cross them), his appeal was surprisingly wide. There was a constant flow of people turning up, and apparently they had been doing so since 5 a.m. this morning (the actual time of the crash).

The shrine that has grown here over the years is really impressive, and we were really taken with the look and feel of the site, and the love and care that has obviously gone into its upkeep. But this hasn't always been the case. 12 years ago, the site was described by magazine review as "more like a shit hole than a shrine". The Marc Bolan club TAG (T.Rex Action Group) really should be commended for everything they have done to change all that. In the late 1990s it was announced that the tree was due to be felled, and as a direct result of this news, TAG was formed in 1999 by Fee Warner. Her work has been tireless and within a year of its creation, TAG had become the legal leaseholder of the 'Bolan tree' site, including full ownership and responsibility for the tree itself. In 2002 Fee paid for a bronze bust of Bolan to be created and placed at the site (and unveiled by Bolan's son Rolan, on the 25th anniversary of Marc’s death). Then in 2005, TAG funded the installation of five memorial plaques at the site. 4 to commemorate members of T.Rex who have passed away (Mickey Finn, Dino Dines, Steve Currie and Steve Peregrin Took) and another in memory of June Bolan, Marc's ex-wife.

You couldn't help but be moved by the genuine show of love all around -- notes, cards, flowers, posters, all from fans still touched by Bolan's life, here in the 21st century.

It was only a few weeks ago that we were remembering another legends passing 30 years ago, Elvis Presley. But I wonder how many other artists will still have the love and affection that was obviously on show today, 30 years on. 1. Bolan once told Gloria Jones that he didn't expect to see 30. He died two weeks before his 30th birthday.

2. A copy of the NME was found inside the wrecked car, it was open on an interview with Pete Townsend. The headline was titled 'Hope I die before I get old'.

3. Bolan never learnt to drive, as he feared he would die young in a car crash. Indeed he had had visions for most of his life of this happening.

4. In the song 'solid gold easy action' are the following lines:
a woman from the east with her headlights shining,
eased my pain and stopped me crying.
and
Easy as picking foxes from a tree

Below is a quick movie file I took at the site today (you can also click on the two photos above, to see them in a larger format):


You can find out more about the work of TAG here:
http://www.marc-bolan.org/

Marc's Slider album made my 'Best of 2007' list, yeah I know that sounds weird! but you can read about it here

I guess you got to know the man and his music in his glam days, as your references only include "T Rex". For me, his glory days were as Tyrannosaurus Rex, but I concede that I am in the minority.
A lot of people did feel at the time that this matched one of your "when bands go bad" categories. A tragically early loss of life.

I must admit that I was never a huge fan of Bolan. Not that I actively disliked his music or anything but it's just it never really rocked my boat. I didn't really get 'Glam'. Although I know Bolan was far more than just that.

However, what can't be denied is that Bolan was hugely talented, was an excellent guitar player and had a huge influence in modern rock music (in particular the indie scene of the 1980's). It can be argued that he still has considerable influence even today.

It is heartening to see then that a man with real talent is still remembered and honoured so affectionately.

An interesting insight into how much the man is still respected even today. I'd have to admit to not being a massive fan back in the 70s but can appreciate what he did back then a lot more now. For some bizarre reason I always seem to associate his music with fairgrounds, as whenever I went (in the 70s) there was always a T. Rex track playing on at least one of the rides.

Maybe see you here on Sunday....

Hi Clair - I will actually be be celebrating Marcs birthday in a Bolan-esque style-y, but will be at a gig by tribute band Too-Rex!

Hope you have a good night, and thanks for popping by!

He was thought by many to be "teeny pop" at the time but his best stuff still stands up with the best. I mean lyrics like I Drive A Rolls Royce Cos It's Good For My Voice aggghhh genius. Fave Bolan moment for me is the crunching guitar chord followed by a joyous yelp at the start of 20th Centuary Boy. Way to go boys. CA.

I got 'into' the 'Glam' T-Rex, but then I discovered Tyrannosaurus Rex with Marc's fabulously poetical lyrics and the rich tapestry of strange sounds supplied by Steve Took and I was totally won over :-) I still love songs such as my own personal 'protest song' - Children of the Revolution ("But what does it all mean??" quizzed my father), but to me Tyrannosaurus Rex is under rated and the level of their success is underrated too. And yes I remember T-Rex Tunes being played at Fairs in the 70's too. Oh bring back the Waltzers :-)

thanks everyone for your comments, and thanks for popping by and taking the trouble to leave a comment Fee.

"4. In the song 'solid gold easy action' is the line:
a woman from the east with her headlights shining,
eased my pain and stopped me crying."

I'm surprised you didn't pick the obvious line from SGEA....'As easy as picking foxes from a tree!"

Anonymous said...
This comment has been removed by a blog administrator.
Friday, March 06, 2009

thanks for your article. i have written a piece about the shrine:
Marc Bolan Barnes Common