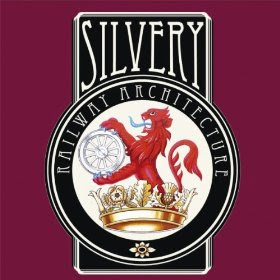 Perfect timing... Just as I'd finally worn out my copy of Silvery's first album, their second offering drops through the letterbox. And if you liked their debut 'Thunderer and Excelsior', then you're going to love the follow up 'Railway Architecture'. Another 14 insanely addictive tracks of their trademark brand of indie (sm)art Rock.

Opener 'A Deconstruction of Roles' sets the pace perfectly, and we are off on another madcap roller coaster ride, courtesy of James Orman and his vaudevillian vision. Silvery's world is a bit like being inside one of those more 'substance induced' surreal episodes of the Avengers in the late 60's... one minute you're in John Steed's apartment knocking back the Bolly, and the next you've fallen through a secret door, down a 'wall of mirrors' corridor, and landed in a garish Victorian funfair where Silvery provide the quirky soundtrack.

It's Music Hall for the 21st Century via a glammed up Bowie, a psyched up XTC\Dukes of Stratosphear, a Modern Life'd up Blur, and a sparked up Sparks.... Yes, it's all that, and yet it's so much more too. Silvery walk a clever line, it's arty avant-gardism, yet always remains completely accessible. They never take that fatal extra step into overblown self indulgence, and there's the trick. The end result is intelligent, witty, 3 minute (and less!) perfect pop songs that are instantly attached to your brain. Just check out gems like 'Identity', 'Two Halves of the Same Boy' 'The Naked and the Dead', 'Sparks and Fire' and 'Ropes and Fire'. This album also finally gives a home to their originally 'download only' cover of 'You Give a Little Love' (from Bugsy Malone), which is pure genius.

So climb aboard the Silvery Flyer for a First Class express trip to Railway Architecture... this ain't no sleeper!


Here's Identity from the new album:


The Naked And The Dead:


You Give A Little Love:

I can't wait to hear this!
Myself and my daughter love Silvery, such a feelgood sound that we find it impossible to listen without smiling! (sometimes throwing in a happy dance)
We patiently await a gig 'oop North'...Manchester would do nicely.

Big fan ' of Silvery's first album. from the snippets and clips I've heard this sounds more widescreen than the debut.

Have you seen they're now Mercury Prize recommended

I liked "The Naked And The Dead".

JJ - It's a cracker, get on Amazon now and order one up! In my top 5 albums of the year without a doubt.

Mondo - Didn't know about the Mercury recommendation, great news. You heading up smoke to see them on Saturday??

Thanks Heff - I think Buttlik could do an awsome cover of that ;-)

Here at Medd Towers it's getting repeat plays on the radiogram.

Nah - would love to, but can't do Saturday, although have seen them a couple of times before..

Your description of Silvery as landing in a garish Victoria funfair is briliant and spot on. I really like their singles and love, love, love their version of 'You Give A Little Love' but I'm not sure if I could cope with a whole album to be honest. Is it all so... cheerful?!

nice work JM, glad it's hitting the spot for you Sir.

Mondo - shame, hopefully there will be a few more dates to promo the album

Cocktails - why thank you! Erm, it's all in that kinda vein I guess yeah, couple of slower toons though.

There's an air of Sparks being mated with Flintlock about Silvery. I mean that in a good way.

yes, definitely in a good way! That's some mix, but I see where you are coming from.