Since those early 1960's 'reel-to-reel' tapes of my uncles were unearthed last year (containing a recording of them performing on BBC radio), there has been a steady trickle of Essex Brothers bits and bobs being found in the family. I particularly like these three pictures which have surfaced recently. The first two were sent home from America. My cousin has been slowly clearing out my aunts possessions since she died a few years back, and came across these photos in a draw somewhere. The final one is a picture of them signing autographs! and it was discovered by Mick's partner Kath. I keep saying Mick, because that was his name (obviously!), but I and everyone else only ever knew him as Vic!

Another cousin has taken hold of the 78's that have been found, and she and her husband are converting them, cleaning up the tracks, and making them ready for another family CD!

When I concluded the story about those tapes, I mentioned that uncle Vic's partner Kath had given me 11 tape cassettes containing various recordings he'd made in the 80's and 90's. I said that I'd convert them to CD for her, and it turned into some project! Over the next few months I retrieved no less than 168 songs from these tapes, and also the late 1960's\early 1970's mini-album that one of my other uncles had unearthed. 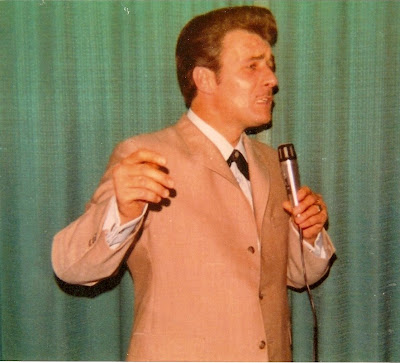 These are mostly all home recordings, but on the whole the sound quality was still pretty good, and all it needed was a quick levelling of volumes to turn these into a nice set of CD's for the family. I was also able to re-arrange the tracks to give each CD a bit of a theme... All the Sinatra\Easy Listening songs together, all the Johnny Cash\Country and Western songs together etc etc. 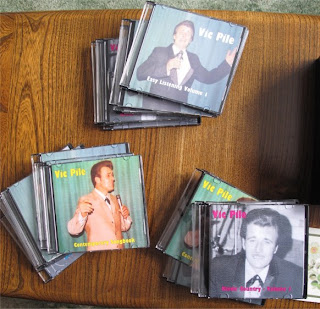 In the end I produced sets of 8 CD's for my aunt, my dad and his remaining siblings (and a set for me of course!), and I'm pleased to say that everyone was delighted with them - particularly my aunt. I only wish I'd though of doing it when my uncle was still alive, I'm sure he'd have been chuffed to see his old recordings turned to CD. Uncle Vic died in 2006, aged 65. 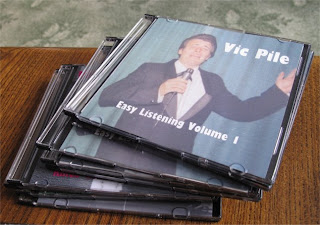 I'm really pleased to now have these in my collection, and it's a lovely memory of one of my most favourite uncles. Vic was still singing in pubs and clubs right up to his death, and listening to these recordings it was interesting to hear how his voice matured over the years. What started out as a poppy 'Everlys' sound in the late 1950's, was by the end a rich, velvety tone, with more than a hint of Bing Crosby about it at times! Anyway, here's a few of the songs that I converted for the CDs. I don't know much about the origins, all I know is that the first two were made with an organist called Steve!

The Story Of My Life:

Love the photo with green curtain - classic! I've never noticed the family resemblance until the 3rd photo down and the chap on the left. You can really see it there..

Audio's tricky at work - will have a blast tonight. Is that the same Cape Cod sampled by Groove Armada?

Another great installment, Cape Cod was my favourite of the 3. Impressed with your dedication in creating the CDs, expect a track on your Christmas compilation yes ?

I was going to say that that's one hip uncle you've got there with the Groove Armada track but Mondo beat me to it!

Looks like the Essex Brothers were pretty groovy themselves though. I love that hair - must have taken ages to sculpt into position.

Fripperies aside, this is a great end to the tale. You've got a fantastic piece of family history there that will be a talking point for years to come.

Mondo - Yeah the green curtain backdrop is 70's showbiz all over eh?!

Never realised that about the Groove Armada track. I only know 'that' bit (it's no ordinary bit, it's an M&S bit).

Thanks EF - may have room for one or two on this years countdown! As long as your brother isn't rude about them!

Cocktails - yes, gravity defying hair!! and long before 'super hold' product too!! I'm chuffed to have all this family related stuff safely in the Piley Towers vault. As you get older, things like this mean more and more to you.

I'm sure the family were delighted with those cd's! what a lovely thing to own and to pass on to your own son..his children and so on.
My dad has tapes of him playing the piano and singing, one with the 8 year old me joining him for Billy Joel's My Life and after reading this I really do think I should get them put onto disc, at the very least for my daughters amusement!

thanks JJ - look forward to hearing that over on your blog as and when!

I very much doubt that P!

I think you should incorporate their hairstyles as your own, Piley, lol !!

Thanks F-Ron appreciate that thought.

Heff - to be honest, I sported worst haircuts in my time!